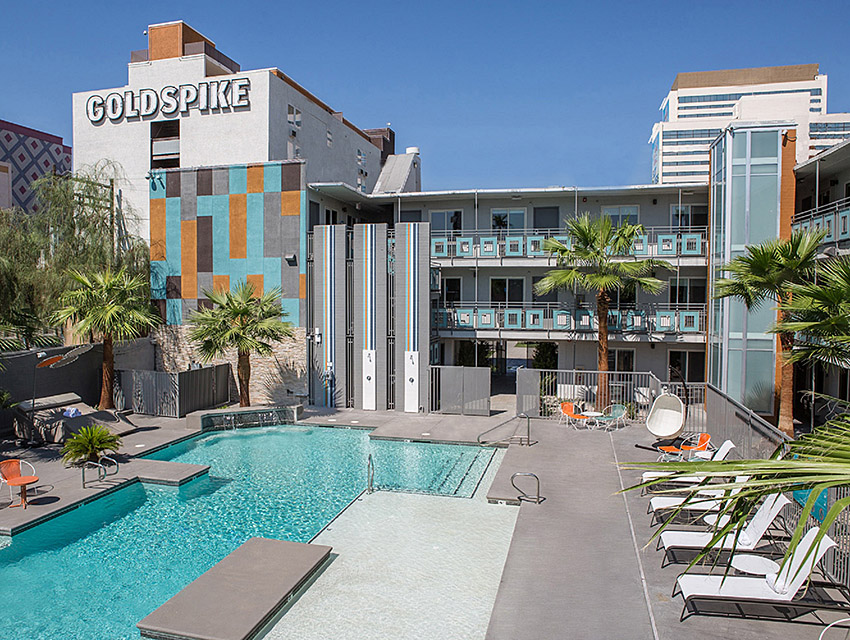 Courtesy of Oasis at Gold Spike

Las Vegas is rife with hotels touting themselves as “boutiques,” but it’s hard to take that mantle seriously when said “boutique” is attached to a 4,000-room mega-resort and its in-house dining is a celebrity chef-helmed restaurant. In a city where old hotels and casinos are imploded, exploded or simply taken apart piece by piece to be replaced with something bigger and newer, you don’t often see the types of small, focused hotel rehab jobs done in cities like Los Angeles, Palm Springs or Scottsdale.

Downtown Project—the $350 million gamble on downtown Las Vegas redevelopment that Zappos.com CEO Tony Hsieh’s been taking for the last few years—recently finished refurbishing and upgrading the Oasis at Gold Spike into a boutique hotel that actually earns its designation. Its 38 rooms and six suites are decked out in midcentury-modern-influenced style, with no two rooms containing the same decor or furnishings. As Downtown Project Operations Manager Michael Stoll puts it, “You could stay here 44 times and have 44 different experiences.”

The Oasis closed in early 2013 when Downtown Project purchased the Gold Spike Hotel & Casino, shutting down the hotel and turning the casino into a trendy-if-bizarre hybrid bar/coworking hangout/game room. (Its former owner, The Siegel Group, also owns and operates two boutique hotels in Vegas, Rumor and The Artisan.) Downtown Project’s renovation of the Oasis went beyond merely giving the property a facelift, according to Stoll, who said they “took the entire building down to the studs,” installing all-new plumbing and electrical, as well.

In line with Downtown Project’s focus on “Collisions, Co-learning, and Connectedness,” the lobby of the hotel doubles as a casual co-working space, with a library of books on business and entrepreneurship available, as well as a collection of vinyl records, which can either be played on the turntable in the lobby, or borrowed by guests in the record-player-equipped suites (or in the hotel’s parlance, “Ultimate Crash Pads”).

The boutique’s rooms surround a chill pool area offering a variety of seating options, including a covered cabana and hanging basket chair. A stage adjacent to the pool hosts music on weekend nights and during special events, usually featuring live jazz acts to contrast with the DJs and heavier bands booked at the adjacent Gold Spike—which is itself an amenity for Oasis guests, offering the loungey outdoor Backyard area and the Grill restaurant (from which Oasis guests can also order room service).

Although the standard rooms—ahem, “Premier Crash Pads”—at the Oasis are snug, weekend rates on the property’s website are only in the $70 range, with the considerably roomier “Ultimate” suites available for about $170. Not too bad for a boutique hotel with a Las Vegas Boulevard address, yet ideally located in the middle of downtown’s buzziest bar crawl.