Home Uncategorized Your Sneak Peek at the Newest Hotels Opening in L.A. 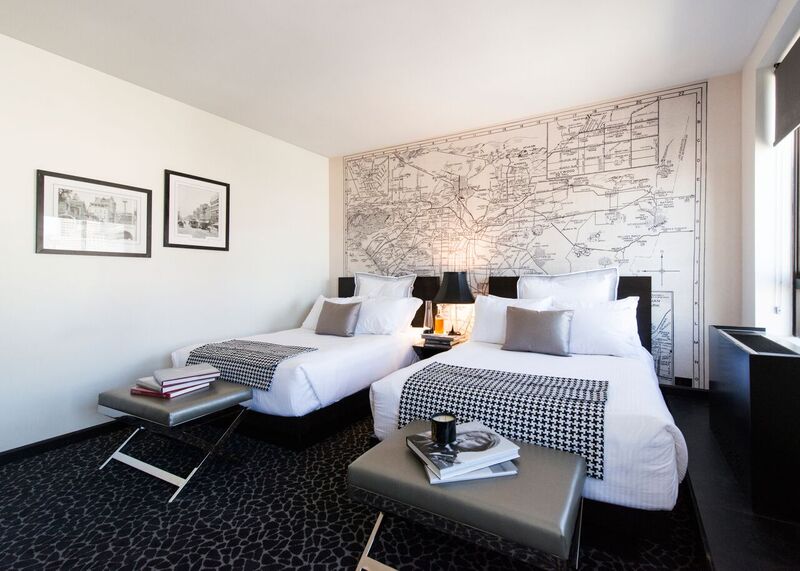 Photograph courtesy of The Mayfair

Over the next 12 months, a dozen new or remodeled hotels are opening in the city. Why now? One lofty guess: the world has finally discovered that L.A. is the best city in America, and people are flooding to the left coast to experience it. Another possible reason? An “If you build it, they will come” push to snag the 2024 Summer Olympics bid. Or maybe it’s just time for some fresh lodging (and bedding). Our stalwarts are stunning—the Beverly Wilshire, the Biltmore DTLA, the Langham Pasadena—but when the mood strikes for a staycation with a hint of surprise, there’s a whole new hotelscape to check in to. Here are five we can’t wait to try:

For a city on the ocean, L.A. has very few waterfront hotels. The yacht chic-themed Shade Hotel—the brand’s second in the city—is out to change that. Book a Deluxe Suite View room that faces the marina for the best views, complete with a private outdoor soaking tub to enjoy them from. Or, save a few bucks with a standard room and catch the panoramic vistas from the rooftop pool or at Sea Level, the hotel’s Cali-coastal waterfront restaurant (don’t miss the crispy chicken starter).

RELATED: The Best L.A. Hotel Lobbies To Just Hang Out and Chill In

After a serious  multi-million dollar facelift, the former YMCA hostel is a reimagined beauty with 1920s Spanish Colonial architecture preserved throughout. The rooms, designed by Santa Monica-based Studio Collective, pay homage to the period with bold-patterned wallpaper, Spanish tile, and wide plank hardwood floors. If themed rooms are your thing, upgrade to a Signature Suite; seven different décor motifs are available. Our favorite? The Casa Blanca Suite (who doesn’t love a room with a secret door to a private cocktail and dining area?). Speaking of drinking and eating, Chef Casey Lane (Tasting Kitchen) is on deck for the hotel’s culinary program, while NYC’s Dushan Zaric (Employees Only) leads the cocktail program. Located across from L.A. Live, the hotel’s two restaurants and four bars will, thankfully, up the classy ante on nearby pre- or post-game nosh options.

Early 20th century Chinatown, Hollywood’s Golden Age, and La Fiesta de las Flores (the 19th-century precursor to the Rose Bowl Parade): It’s a strange trifecta of design inspiration, but it works as a visual tribute to DTLA’s colorful history. Located in one of the four towers of the new Metropolis development, L.A.’s Hotel Indigo is aiming to be the brand’s flagship starlet among 70 properties worldwide.

RELATED: The Views Are as Good as the Food at These 5 Rooftop Restaurants

Opening in the Commercial Exchange Building Downtown, Freehand LA will be a welcome oddity as the city’s first hotel-hostel hybrid. While there are individual room available, we suggest rolling the dice and opting for one of the 59 shared ones. There’s plenty of space to commune with your newfound bedfellows, like at the rooftop pool and Broken Shaker (the signature bar). Of the other two Freehand hotels, one in Miami and Chicago, L.A.’s Freehand wins the award for largest to date.

No need to wait around for a Great Gatsby-themed party—just head to the Mayfair. The iconic hotel has been around for 90 years (fun fact: the first Academy Awards after party was hosted there back in 1929). The revamp—led by architect-designer Gulla Jonsdottir—will be complete in early 2017, but in the meantime you can have your own after party in one of the 277 updated rooms or check out artwork by RISK (aka Kelly Graval) as part of the hotel’s artist-in-residence program.

Honorable Mentions: two of the hotels we’re most excited for in 2017 are The NoMad LA (yes, the West Coast outpost of NYC’s Nomad—foie gras-stuffed chicken, anyone?) and Nobu Ryokan Malibu (Co-owned by Robert DeNiro and the restaurant group’s first hotel endeavor). However, being that they’re both deep in construction, they’re still camera shy. In the meantime, you can find us stalking the new NoMad food truck that launched in L.A. this past October.

Inside the New Hotel Figueroa, L.A. Culture Comes to Life Through the Lens of Estevan Oriol