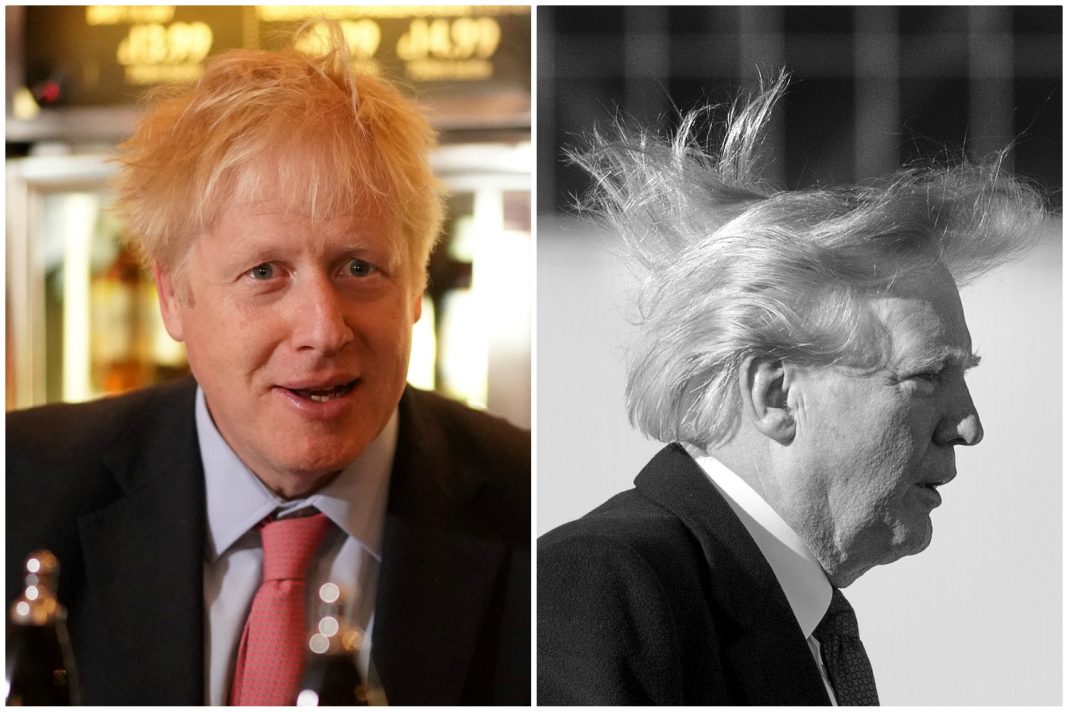 Birds of a feather sure do flock together, especially when it comes to politics. And Donald Trump and Britain’s new Prime Minister Boris Johnson have even more to bond over than their xenophobic political agendas. The two share another distinguishing characteristic: bizarre, straw-like, yellow-blond hair that’s somehow all over the place and barely there at the same time.

We decided to ask three local stylists who specialize in men’s hair what they think about this state of affairs (af-hairs?). What advice would they give these doughy, right-wing statesmen about revising their tresses? And, if they absolutely had to pick a lesser of the two follicular evils, which would they say looks ever so slightly better?

How does one even get hair like these Donald Trump and Boris Johnson?

Well, I have the same straw bleached hair. Please take my answers into consideration acknowledging my hair’s burnt and fried on purpose! Unfortunately for Trump, it looks like that he’s lost all pigment and is trying to hide that. It winds up looking like helmet-head combover. Like he soaked his head in Just For Men. Is he letting Melania color his hair the same night she cuts it? Boris has that incredibly fine hair; it’s different than Trump’s because that could possibly be his natural color, but his hair is screaming out for product to control it.

How would you fix their hair messes?

Trump’s hair has been a source of ridicule forever, so it’s clear he’s so thirsty for attention. He’ll take any, even if it’s negative. They should both cut their hair into classic men’s haircuts with short backs. Bernie Sanders is the perfect example of someone who had crazy hair and has now cropped it shorter to have a more sophisticated look.

Trump has the worst hair in the history of hairdos! He even beats Guy Fieri. The only thing worse would be if he had an ’80s braided tail.

How does one even get hair like these Trump and Johnson?

Trump’s hair is just gray and coarse, so when it’s colored it looks like straw. Johnson has very fine hair, and from what I’ve read, he does this look as a vanity. If Johnson wore his hair neat, it would look even thinner.

How would you fix their heady situations?

Well, it’s fixable, but I don’t think the improved results would last. I saw Trump wearing his hair like Michael Douglas in Wall Street recently, all wet, all slicked back. A huge improvement! It’s more about their behavior than their hair—you can steer them right but they will both revert to what they know. Men need classic mens’ haircuts. Trump’s hair is so misshapen, like a “coif” from the ’60s. I don’t think it’s fake: it’s all his hair. There’s a big bald spot in the back, but his vanity and ego won’t allow him to show it—so it’s one big combover!

Boris Johnson’s is worse. At least Trump’s making an effort; he colors his hair, we don’t see a root. He was “hay blond”—now he’s more buttery yellow with a huge racing stripe.

Celebrity colorist and owner of four eponymous salons, one in the Montage Hotel

How does one even get hair like these two—ahem—gentlemen?

That’s a good question. It’s a national secret! I call Trump’s hair “Trumpe L’Oeill”—it has its own personality. The color changes—light or golden—and he wears it in, well, interesting shapes. Toupee or not toupee—that is the question. You can’t even call it the rooster look— that’s insulting to roosters!

How would you improve their situations?

You expect a conservative party leader to have a clean tailored tapered look. But these two guys go to other countries looking like they they rolled out of bed on Air Force One. But Trump’s hair is his iconography. It’s more recognized than his policies. He probably shouldn’t change it at this point. Boris is new on the world stage. He’s trying to look relatable—to be young and fresh. But it has an artificial tinge to it, like no color in nature. They’re both just trying to be outrageous. It’s a stunt, showmanship, like everything else they do. We’d probably find out UFOs are real before we discover either one’s true hair color!

They both tie—they’re even! Maybe both of them should let the surreal color go and focus on governing, but I doubt it!

RELATED: A New California Law Will Require Trump to Fork Over His Tax Returns