Home Fashion How a Former Newspaper Photographer Became One of L.A.’s Most Sought-After Hat... 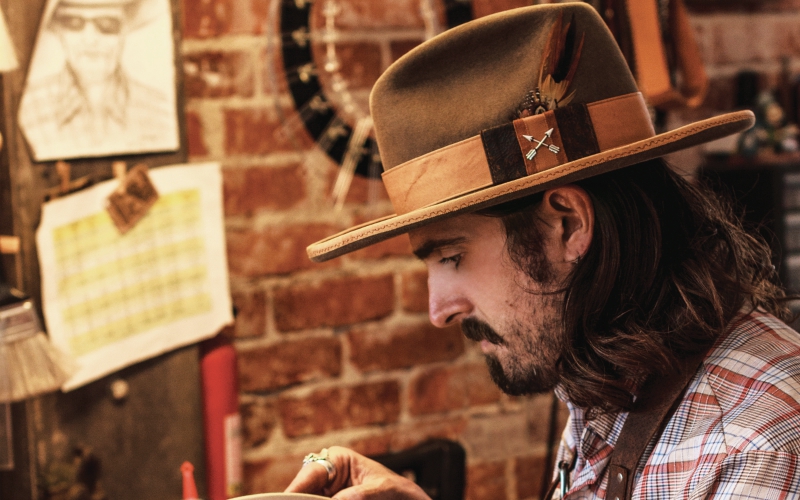 Each day begins pretty much the same for Brandon Wise—he wakes up in his live-work space on Abbot Kinney, tucks away his cot, brews a pot of coffee, and returns to crafting the custom bowlers, fedoras, and classic western-style hats he’s become known for. Made by hand, each one takes a week to complete. Using industrial tools would be a lot easier, but, says Wise, “I think by doing it this way I am able to feel the hats and put more of myself into them.” He makes everything with longevity in mind. “I don’t distress them,” he says. “They are made to be bulletproof so you can distress them yourself.”

The 34-year-old’s route to becoming a sought-after milliner was circuitous. Rudderless after graduating from a Baptist high school in the Valley, he took odd jobs before serving as a photographer for the Santa Monica Daily Press. “My dream was to work as a correspondent for National Geographic,” says Wise, who eventually studied cultural anthropology at UCLA to try to make the dream a reality. “But then,” he says, “the newspaper industry started falling apart.”

In 2015, rudderless once again, he found himself drawn to an old Stetson. As a kid, Wise loved to dress as a cowboy, in no small part because of the head-gear. “I could be anybody I wanted with a hat,” he says. “In a black hat I’m the outlaw; in a white hat, the Lone Ranger.” Now, as a grown-up, Wise wanted to see how he could transform a Stetson, not the other way around. He switched out the sweatband, reblocked the felt, and swapped parts with scavenged hats.

Soon enough his handiwork was drawing requests for other hats, which he crafted using tools he made himself. The Wise Hatter, his Venice shop, was open a year later, offering timeless toppers that can fetch more than $5,000 apiece. “I’ve always been a person who needed a purpose in life,” says Wise. “I need to be tested and always learning and growing. Hat making has allowed me to do that.”

Hats On to This Season’s Hot Trend