Home Fashion The Style Industry Is Hyped for a New Era In White House... 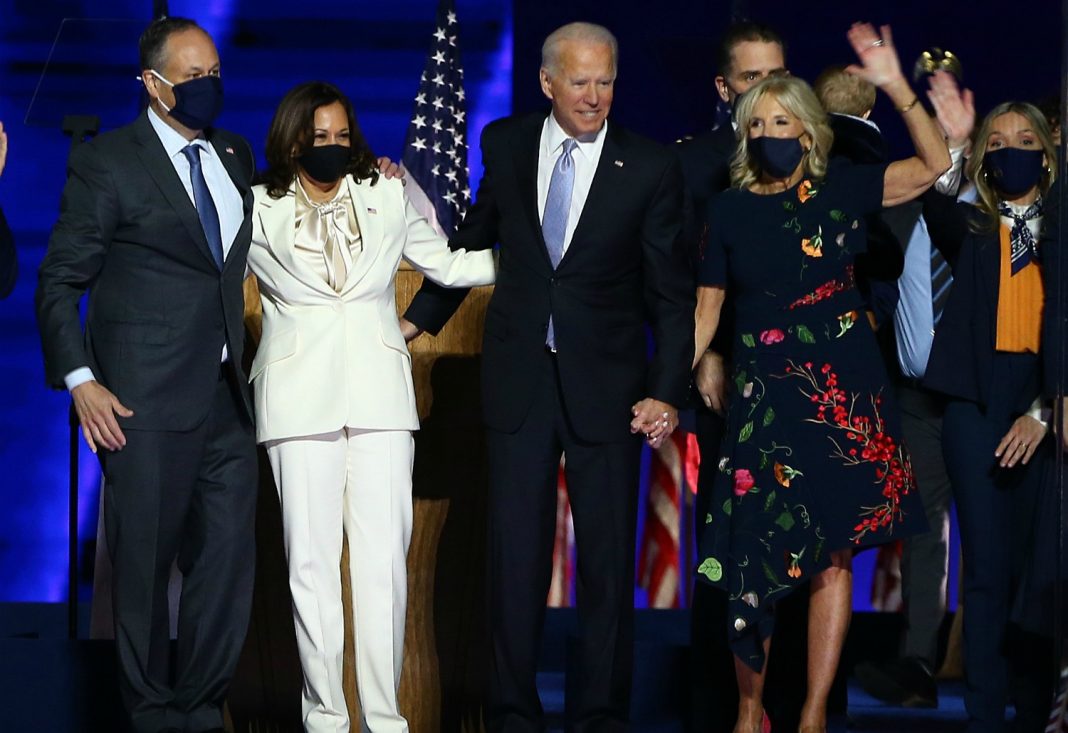 Saturday’s announcement that Joe Biden and Kamala Harris had officially reached (exceeded, in fact) the 270 electoral votes needed to become President-elect and Vice President-elect triggered joyful celebrations in the streets of U.S. cities from coast to coast. In the fashion industry, it stirred anticipation for a new era of White House fashion.

With press releases coming fast and furious from major American fashion companies, fashion journalists found themselves harkening back to the days of Michelle Obama on the cover of Vogue (where she appeared three times in seven years), and the then-young designers like Jason Wu, Thakoon, Brandon Maxwell, Sophie Theallet, Cushnie et Ochs, and Christian Siriano she helped put on the map, while also elevating accessible-to-many brands like J. Crew. When Mrs. O wore anything—including sneakers (Lanvin, Commes des Garçons) or a bathing suit cover-up—those items sold bigger and got more press than fashion choices by any public figure besides maybe Meghan Markle.

Not that fashion completely disappeared in the (now waning) Trump years. Melania and Ivanka Trump wore their heavily tailored, slim-cut shifts, suits, and blouses by Dolce & Gabbana and other European and New York designers, but never seemed to take much joy in it, projecting a sort of rigid elegance. Melania’s military-style look at the Republican convention was compared to Fidel Castro. But what may go down in history as the current First Lady’s most memorable fashion choice was an inexpensive jacket from Zara emblazoned with the phrase “I really don’t care do u?” which she wore to visit immigrant children being held in detention centers on the border.

When future VP Harris strode onto the stage at the Chase Center in Wilmington Delaware to address the nation after her glass ceiling-shattering victory, she did it in a white pantsuit and charmeuse white pussy-bow blouse, nodding to the American women’s suffrage movement of the early 20th century, which favored the color white to symbolize “the purity of its purpose,” as the New York Times puts it. As you probably recall, the Democratic women of the House of Representatives all wore white to February’s 2020 State of the Union address by President Trump as a statement following his impeachment.

Harris’s suit was made for Madam Veep-to-Be by American designer Wes Gordon for Carolina Herrera, which could be a signal to the fashion universe that Harris will be favoring American designers (Herrera was also favored by Laura Bush and Michelle Obama). At recent appearances, Veep-elect Harris has also worn suits by Joseph Altuzarra, another American designer famed for his tailoring. It’s clear she’s already catching the eyes of style lovers, as people go nuts for pearl necklaces—which have been a signature for Harris since she graduated from Howard University—and Converse Chuck Taylor sneakers.

Harris’s victory suit became an instant icon when Maya Rudolph wore an almost identical one to play Harris on Saturday Night Live shortly after the speech wrapped up. Stores in New York City had been closed for hours, but SNL costume designer Tom Broecker tells Popsugar that he had members of the team each working on the blouse, the jacket, and pants an hour after Harris started her speech. Incidentally, the SNL team used cream charmeuse that was intended for a suit Cecily Strong was meant to wear in a Melania Trump sketch that never ended up being used. And they found a flag pin for Rudolph at the very last minute before she stepped out to do the cold open with Jim Carrey and Alex Baldwin.

As for Dr. Jill Biden, the First Lady-elect and lifelong educator has an eye for choosing unique pieces that are tailored but feminine, often in bold colors, like the dark green shirt dress by Brandon Maxwell she wore at the Democratic convention this summer. On Saturday, Biden paired her midnight blue floral asymmetric Oscar de la Renta dress—which had touches of green, yellow, red, and white—with coral Jimmy Choo pumps featuring large bows. The late Oscar de la Renta was an immigrant from the Dominican Republic who cultivated young designers Laura Kim (born in Korea) and Fernando Garcia (born in the Dominican Republic) to take the reins at the fashion house. The two also have their own New York label called Monse, worn by lots of Hollywood female heavyweights.

Clearly, a lot of people liked the look: it was available on the Outnet at the time of the speech, marked down to $1,707 from the original price of $5,690, but currently it’s sold out. No doubt, knock offs will be available soon at a Zara or H&M or Target near you.

And this is just the beginning of the Madam Veep/First Lady fashion obsession. Expect plenty of Vogue covers and Tom Ford gowns. In the meantime, there’s already a popular website called WhatKamalaWore.com.