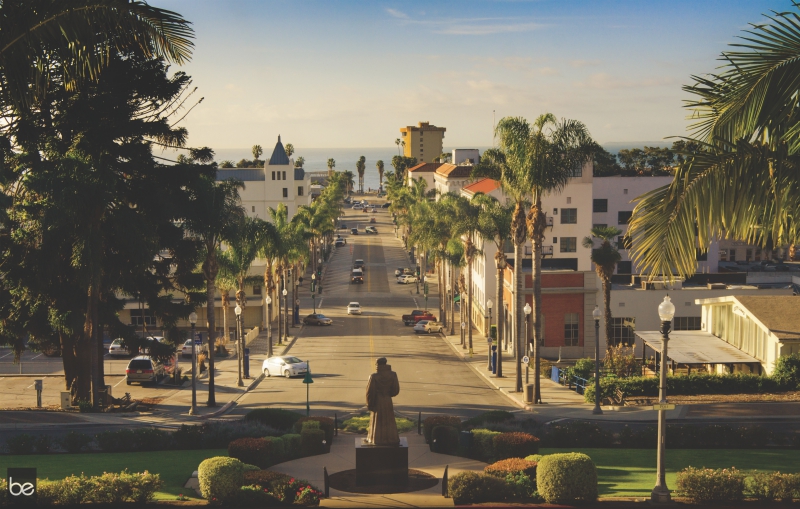 Ninety minutes north of L.A., Ventura is a lot like other Southern California beach towns used to be: relaxed and unpretentious, without too-too many people vying for the same patch of paradise. With Santa Barbara pulling the masses a half hour north, this area feels like a well-kept secret.

Though the Thomas Fire in December ravaged hillside neighborhoods, you’d hardly know it as you roam the wide beaches or head from the pier to the shops and restaurants (many with dog-friendly outdoor seating) of Main Street. The city’s roots may stretch back to the days of Spanish missionaries, but there’s plenty here to keep you basking in the present.

Any visit to Ventura should begin downtown on Main Street, where storefronts from the 1920s line the sidewalks. Up the way on California, the neoclassical City Hall sits at the base of the hills. A half mile in the other direction is the ocean. In between, you can start the day with an egg scramble or raspberry-oat bar in the snug confines of Marie Shannon Confections, on nearby Chestnut.

Then make tracks toward the shoreline. Join the anglers on the pier for views that sweep from the curving coastline to, when the weather’s clear, Santa Cruz and Anacapa islands. It’s about half a mile along the promenade to reach Surfers’ Point (Wheel Fun Rentals, near the pier, has bicycles for rent, if you’d like to cover more ground). Look carefully and you may see dolphins swimming past the wet-suited wave riders. About half a mile farther, cormorants, egrets, mallards, and pelicans flock to the estuary at the Ventura River.

For a less developed stretch of beach, trek in the opposite direction a couple of miles from the pier to Marina Park. There’s a path through the dunes to the mermaid statue that guards the harbor entrance. A companion statue stands across the channel near Ventura Harbor Village, where you can rent a kayak or paddle board and glide past fishing boats to the Keys neighborhood’s waterside homes and private docks. Afterward park yourself at Brophy Bros. and wash down some crab cakes or mussels with a beer.

If you’re looking to eat closer to downtown, Café Nouveau operates out of a cozy bungalow where the tamarind-glazed salmon and ahi avocado rolls may taste even better on the garden patio. Or stick to California Street for sand dabs and a half dozen bivalves from the oyster bar at Lure Fish House before checking out the wares along Main.

The little downtown has no fewer than three spots to load up on gourmet goods. Home-grown Spice-Topia is the place to go for teas and just about any spice blend you can imagine, while the VomFass outpost complements its selection of spirits and liqueurs with an array of vinegars and oils. At We Olive, you can taste tapenades and mustards along with all manner of extra virgin. Olive oil has a long tradition in Ventura: A rebuilt press is among the Old California items on display at the San Buenaventura Mission at downtown’s western edge, where a recently completed 50-foot-long tile mural depicts the city’s history.

Next door, the Albinger Archaeological Museum houses artifacts of the area’s past, and across the street the Museum of Ventura County offers more historical perspective as well as works by Ojai potter Beatrice Wood and painter John Nava.

When it comes time to rest up before going out again, the Ventura Beach Marriott, now renovating its rooms wing by wing, is a solid option in a town that has never over- flowed with hotels. The Crowne Plaza Ventura Beach, housed in the area’s tallest building, sits right on the shoreline near the pier and recently completed upgrades of its own that add a contemporary touch to the rooms. Or get a vacation rental within walking distance of downtown. More than a few venues there host live bands on weekends, and on first Fridays an art crawl takes place on Ventura Avenue and around downtown.

At dinnertime, the handmade pastas and beef tenderloin stew will make you glad you came to Spasso Cucina Italiana, a shakesided cottage blocks from the beach on Seaward Avenue. Rumfish y Vino, on Palm downtown, serves South American and Caribbean specialties like fish stew and Creole sea bass on a lively patio.

Afterward, catch a play or musical at the Rubicon Theatre, an intimate venue adorned with the stained glass from its church days. The Majestic Ventura Theatre, a 1920s movie palace, has decidedly higher-decibel lineups that will leave your ears ringing as you head back out into the ocean-cooled night.

RELATED: This Ventura Couple Saved Millions of Bees From the Thomas Fire

Ventura County Supervisor Sues Over Political D— in a Box