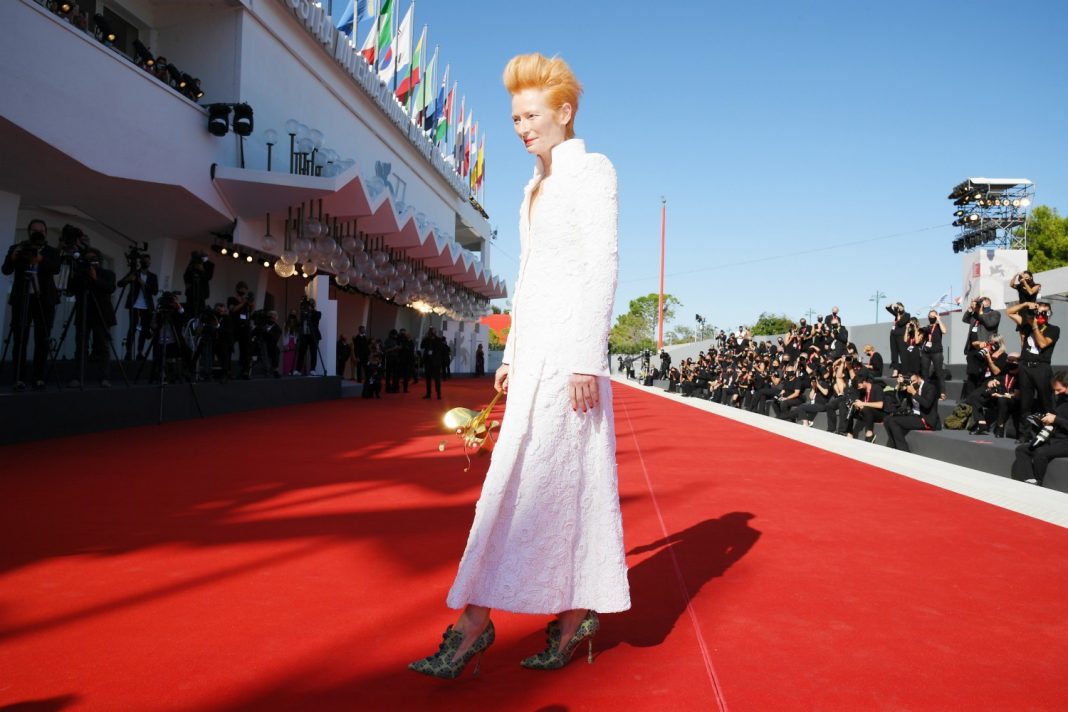 Remember the Oscars red carpet, with its pomp and drama, back in February? That seems like a million years ago, and in both red carpet and fashion years, it is. There’s been no gown-swishing, flash-clicking action since, with the pandemic putting the kibosh on all major entertainment soirees.

That’s made this year’s Venice Film Festival, the 77th, all the more relevant. The fest, which kicked off on September 2 and wraps up on September 12, will likely be 2020’s only big IRL industry gathering, as the Emmy’s will be digital, as were the Cannes and Telluride film festivals. Screenings for next week’s Toronto International Film Festival are taking place mostly at makeshift drive-ins.

Last year, Venice premiered Joker, which became a double Oscar winner. This year, it’s already spawned another milestone: 44 percent of the directors showing films there from all over the world are female.

While it was assumed Venice jury president Cate Blanchett and other stars who decided to attend—Tilda Swinton (Pedro Almodovar’s The Human Voice), The Crown’s Vanessa Kirby (Pieces of a Woman), Regina King (who’s directorial debut, One Night in Miami, received raves), Katherine Waterston (The World to Come)—would sport obligatory face masks, they also brought out some some pre-pandemic glam, if perhaps under playing it just a teence. There was less jewelry, few sky-high heels, and even less skin.

Tilda did a lot of Chanel: she arrived in a bronze Chanel trench coat and bag, appeared in a Chanel two-piece haute couture look that included a white smocking blouse and tiered black skirt on opening night (“It has innate comfort, flow, and a certain kind of unpretentious playfulness,” is how Swinton described it), and then donned another Chanel look for her own film’s premier. She stars in a new short by Pedro Almodovar called The Human Voice, the sole actress in the entire piece.

Her second night Chanel black tie was a white embroidered coat dress and shoes in a damask pattern. While most masks seen on the red carpet were standard issue, Tilda rocked one designed by embroidery artist James Merry, which, along with a number of red carpet pieces, was to be auctioned off for the charitable organization RAD.

Blanchett, who’s up for an Emmy in a few weeks for her performance in Mrs. America, launched a two-pronged fashion strategy: she wore many looks she’d worn to other premiers and events in the past for the purpose of sustainability, and she mostly rocked variations on menswear-style suits: an Alberta Ferretti beaded black suit, an Alexander McQueen black pant suit with a heavily beaded shell that was a repurposed version of a 2016 Bafta dress, an Acne black tux, and an Armani chic print suit, all very reminiscent of her character in Ocean’s 8. Her one nod to old Hollywood glam was her opening night look: a navy satin-caped Esteban Cortazar gown she first wore in 2015.

There were other three actress fashion standouts. Katherine Waterston, who co-stars in The World to Come, wore a black velvet fringed peekaboo Prada gown – monochromatic, with all the detail in the texture. Vanessa Kirby, star of two very well reviewed movies, showed off her sinewy back in a high-neck, low-back red Valentino gown. And Gia Coppola, granddaughter of Francis Ford Coppola and writer/director/producer of “Mainstream” (starring Andrew Garfield as a social media star) showed off the most colorful gown of the festival, a rainbow sunset palette Gucci gown, with every tier of chiffon a different color, which was also headed for the RAD auction, donated by Gucci and designer Allesandro Michele.

Given that the Emmys are virtual, placing cameras in stars’ chosen locales (home, hotel room, dressing room, stage, etc.), it will be interesting to see if Venice’s new precedent will rub off and if actors will lose the sweatpants even if they don’t have to leave the house.