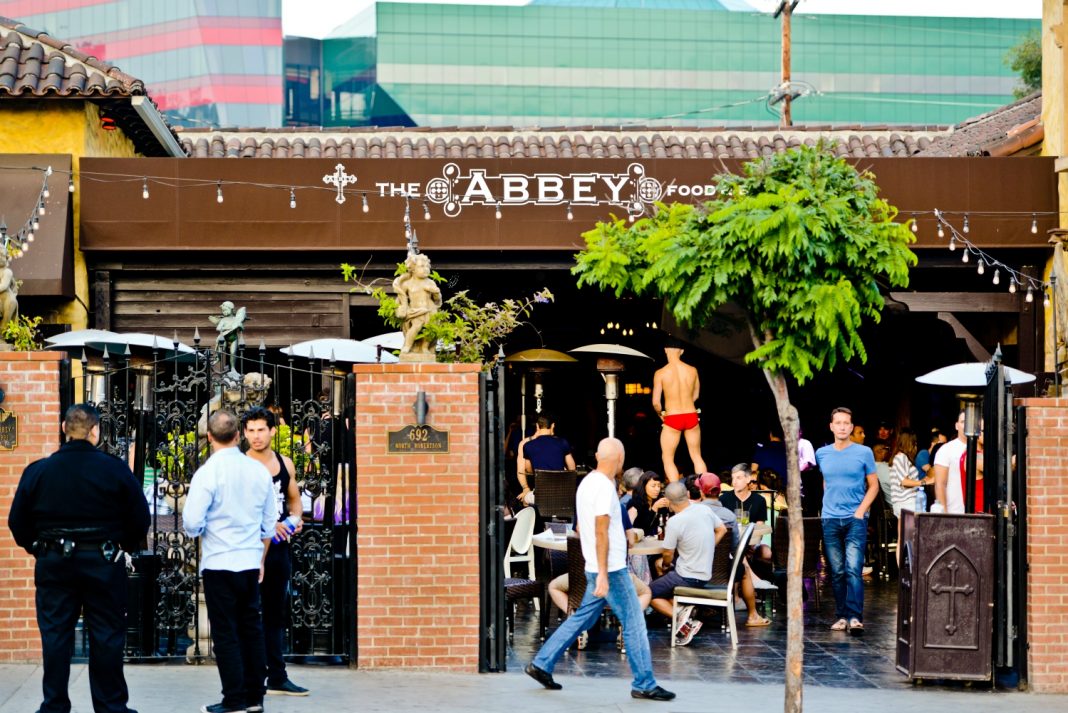 It was an epidemiologist’s worst nightmare set to the new Justin Timberlake/SZA collab from Trolls World Tour.

L.A. was hours away from shutting down all bars due to the coronavirus pandemic, but you wouldn’t have known it from the typical Sunday chaos on Santa Monica Boulevard, as throngs of people (some shirtless) crammed into West Hollywood gay bars like Mother Lode, Mickey’s, and Rocco’s for one last ungloved hurrah.

At Rocco’s, a drag queen in a black latex leotard bravely swooped her hand down to grab a dollar bill from a customer. Another performer did the splits, touching the floor ever-so-quickly as she pulled herself up. Go-go dancers valiantly kneeled on bar tops, accepting cash in their crotches.

Like some other bars in this bustling strip, Rocco’s kept its doors open to the very last minute before L.A.’s shutdown of bars and restaurants, assuring guests in a now-deleted Instagram post that it was committed to “the strictest of sanitary guidelines” while pledging to limit the bar to a 300-person capacity versus 600 to 900 on its most crowded nights.

Restaurants and nightclubs with bigger reputations on the line didn’t seem eager to take on the same level of risk. The Abbey, L.A.’s most famous LGBTQ nightclub, shut its doors on Friday out of an abundance of caution. “If staying open caused the pandemic to spread more quickly, I would be inconsolable,” owner David Cooley explained in a press statement. On Sunday, a black tarp obscured views of its gothic interior, and the usually packed sidewalk leading up to its entrance was eerily empty. Meanwhile, the doors to PUMP, Lisa Vanderpump’s Italianate al fresco restaurant, had been hastily tied with a flexible red bicycle lock. “PUMP will be CLOSED today at 4 p.m. until further notice,” a sign read. “Thank you. Stay safe and healthy.”

For those who work in L.A.’s queer nightlife scene, the coronavirus closings have already been financially ruinous. “On Wednesday, I spent the first part of the day laying in bed watching my email notifications go off, like ‘canceled, canceled, canceled,’” says Joe Faragher, known in the local drag world as Pickle. “My entire schedule for the next three months just evaporated.”

In addition to booking drag acts at the Western-themed bar Flaming Saddles, Faragher also read stories to kids as part of Drag Queen Story Hour, coordinated by the Los Angeles Public Library system, which recently announced closures of its own through March 31. “Of course it’s scary when thousands of dollars disappear,” he says. “I’m just trying to take it one day at a time.”

Colton Iverson, a drag performer who regularly works the queer brunch circuit, put it more succinctly. “Basically, we’re fucked,” he says. “We were all just holding on and seeing if we could still maybe do our gigs to fewer people but now it’s clear [we can’t].”

“But,” he added, “I think a lot of us are going to try to move into digital content to try to keep our creativity going and give the world something positive.”

Some weren’t pleased that West Hollywood’s gay bars stayed open as long as they did. “Thanks for helping the spread of a virus. Glad ur proud,” read one comment on Rocco’s Instagram page. But others praised the bar for continuing to serve drinks as long as they did.

For performers, the situation is more emotionally complex. Faragher says he believes that, ultimately, the city is making the right decision in shutting down bars and nightclubs, even if it means he may go without income for weeks. “The bottom line is that things are closing down because they have to,” he says. “People can say whatever they want but that’s the truth.”

RELATED: L.A. Pride Is Being Postponed, but Organizers Are Determined to Reschedule