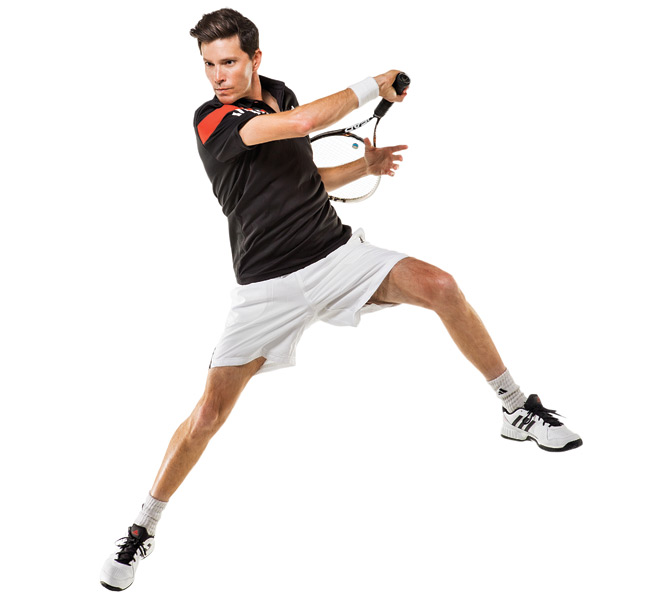 ➻ “Tennis may be a little more relaxed out here. One guy who hired me incorporated yoga into the matches. You didn’t see that on the East Coast.”

➻ Horen, 39, started playing tennis with his father when he was seven years old. The New Orleans native competed in college tennis tournaments and taught on Martha’s Vineyard before moving to Los Angeles in 1997.

➻ “The distinction between a touring professional player and a teaching tennis pro is where we make our money. I had a great college career, but I was never at the Roger Federer level.”

➻ “I started my business, Marina Tennis, about ten years ago. I’ve got a Web site, but I don’t really advertise. It’s all word of mouth.”

➻ There are about a dozen tennis clubs in L.A. County. The oldest is the Los Angeles Tennis Club in Hancock Park, which was founded in 1920.

➻ When Horen first arrived in L.A., he was personal assistant to Hollywood agent Michael Ovitz. “Then he found out I was a tennis pro. So I was playing tennis with him and Dustin Hoffman every weekend—very surreal.”

➻ Horen is a certified tennis professional through the United States Professional Tennis Association. He had to pass a written exam as well as tests on playing and teaching technique. The USPTA provides $9 million in on-court liability insurance.

➻ “I’ll try some crazy stuff when I teach. I’ve got frying pans in my basket. They’re very heavy, so they put you in the right position for a two-handed backhand.”

➻ The first Los Angeles Open, also known as the Farmers Classic, took place in 1927 and was later held at UCLA. Former champions include Arthur Ashe and Jimmy Connors. Last year the tournament franchise relocated to Bogotá and was renamed the Claro Open Colombia.

➻ “The hardest thing, and it sounds cliché, is watching the ball. It’s really unnatural to keep your head still through the shot. When I’m playing good tennis, the ball looks like a watermelon. If I don’t play tennis at all, it looks like a speck of dirt.”