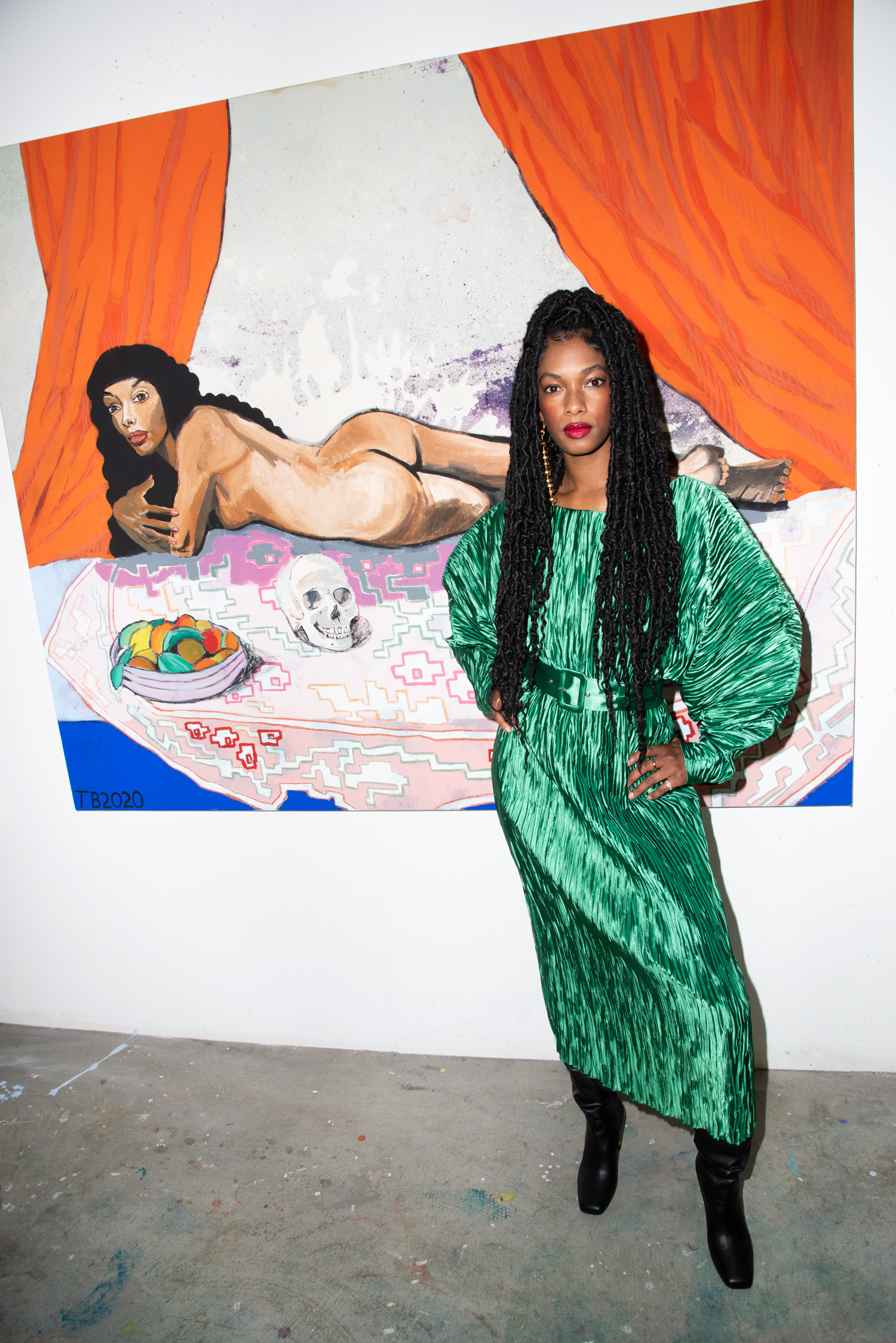 Two years ago, after a series of odd jobs, Melahn Frierson heard about an opening at Jeffrey Deitch’s Hollywood gallery. Following a marathon meeting where Frierson and Deitch bonded over their mutual admiration for outsider New York artists, Frierson was awarded the gig. She took over the gallery’s Instagram account and helped produce a few exhibitions, and now she’s cocurating her first major show, Shattered Glass, featuring the work of 40 emerging artists of color. “We’re tired of going into places and not seeing ourselves reflected on the walls,” says Frierson. The striking gallery director has become a muse for young Angeleno artists like Katherina Olschbaur, Theodore Boyer, and Alison Blickle, who’s currently painting Frierson as Medusa. As Donatella Versace once observed, “The Medusa is…about going all the way.”

In 2017, after spending a few not-so-happy years studying neuroscience in Santa Barbara, Santa Monica-born artist Jess Valice returned home. “The only thing that felt good in school was painting between exams,” says Valice, 24, who has since worked as a waitress and prop-house fabricator while developing her own brand of figuration, full of hyperbolic subjects in all manner of caricature: think prairie girls driving station wagons across the desert and sheriffs riding inflatable horses in kiddie pools. “A lot of it is about redoing childhood—you want to be the outlaw but you can’t run away on a horse, so you do it on a floaty raft,” says Valice, who just had simultaneous solo debuts at ATM Gallery in New York and Bill Brady Gallery in Miami. “I like walking in the shoes of others,” she says. “Their psychology, but with my eyes.” 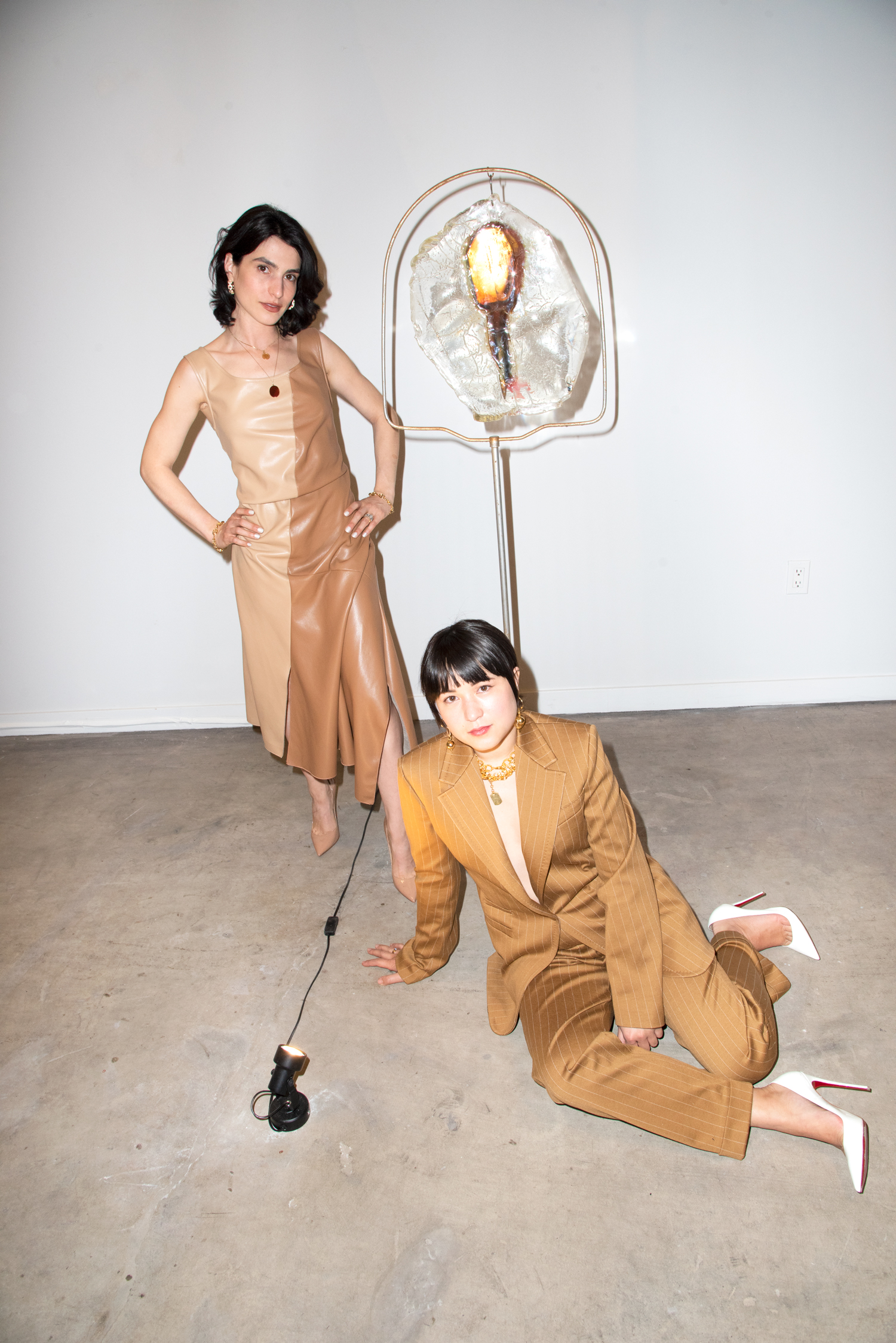 Morgan Elder and Allison Littrell first met in high school in Santa Monica, but lost touch when Elder went off to study at the Art Institute of Chicago and Littrell decamped to Bard. Soon after reuniting in L.A., they teamed up to start their own art space. “Initially, the idea was to start a gallery,” says Littrell, “but we ended up turning it into this multifaceted environment.” Murmurs, which opened in 2019 in a warehouse just south of the Fashion District, houses a popular cafe and a shop packed with a panoply of artist-made goods. Before the pandemic, the gallery in back was the scene of elaborate multimedia exhibitions, dinners, and plays. Up next: Sula Bermudez-Silverman’s solo show on the history of zombies. “We don’t mind mixing it up!” laughs Littrell. 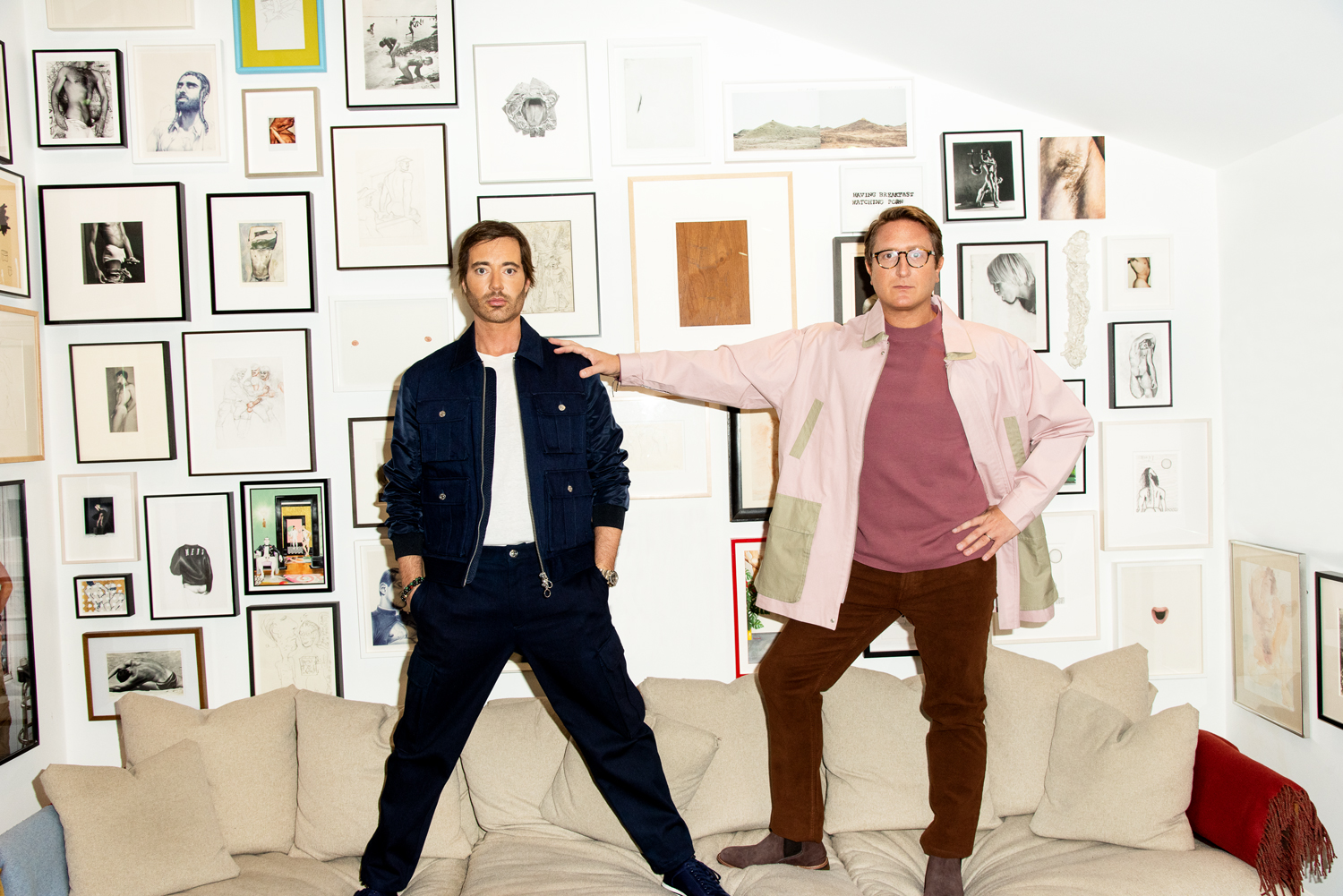 Dinners at the art and design-packed Hollywood Hills home of gallery director Graham Steele and his Brazilian-design-dealer husband Ulysses De Santi used to draw a guest list as eclectic and glittering as the decor, from MOCA chief Klaus Bisenbach to Courtney Love. “We love mixing artists, collectors, people from Hollywood, with doctors, lawyers, and architects,” says Steele, who recently departed a high-profile post at Hauser and Wirth to strike out on his own. “We like to open up the way we live our lives.” Vows De Santi: “As soon as COVID is past us, we’ll continue throwing those salons to bring people back together.” Until then, Steele is working to bring under-represented Brazilian artists to the U.S. market while De Santi is planning a series of pop-ups around the globe to showcase the best of mid-century Brazilian design. The first will take place at the Aspen offshoot of Mexico City’s Galeria Mascota, with other offshoots coming up in Seoul and Los Angeles. “If nothing else, last year taught us we don’t want a permanent space because of the overhead,” says De Santi. “Ulysses thrives off finding specific work for a specific city, with a specific energy, and his attitude also inspired me,” says Steele. “I didn’t leave the best gallery in the world to open a space that has to be one thing or another. We’re in a period of incredible flexibility, and it’s exciting because we don’t feel we need to commit ourselves to one particular idea right now. We can do what feels right at the moment.”

Baltimore native Jennifer Rochlin was a painter until she got a teaching gig at a Catholic girls school in La Cañada, where she launched a ceramics program in the early aughts. “I had never touched clay before,” says Rochlin, who began painting tiles in 2008. “But from then on, I just couldn’t stop. I love the feel of clay. And the alchemical process—the initial immediacy—is kind of addictive.” In the years since, her pots—filled with narrative paintings, sgraffito scratches, even bite marks—have teased out facets of her psyche, earning her solo shows at the Pit in Glendale, Maki Gallery in Tokyo, and Greenwich House Pottery in New York. In April, she’ll have her third major show at the Pit, in dialogue with works by the late ceramic icon Viola Frey. “There’s no baggage with clay,” she says. “I can go full tilt with it and just play.”

South Central-born artist Lauren Halsey had just come off a meteoric three-year run—one in which her sculptural environments depicting Black life earned her the $100,000 Mohn Award at the Hammer Museum’s 2018 Made In L.A. biennial—when she signed a lease on a building next door to her Inglewood art studio. The plan was to use the space as a community center. But in the wake of the pandemic, Halsey switched gears and turned the space into a distribution outpost that delivered more than 19,000 boxes of produce to feed more than 100,000 residents of South Central. Helping head up the effort was Halsey’s girlfriend, Monique McWilliams, who left her popular vintage-clothing business, relaunching this year as Tru2Form, to serve as her aide de camp. “We’re exhausted,” says Halsey. “But this work re-energizes me.”

In 2014, when he was the archivist at the Gagosian gallery, Ben Lee Ritchie Handler, 41, discovered the Insta account @permaidmermaid, which featured L.A.-born artist Nicolette Mishkan, 34, staging impromptu performances as a black-latex-clad mermaid. “Permaid was the synthesis of everything aesthetically and curatorially I was interested in,” says Ritchie Handler, now the global director of Nicodim Gallery. “Most people come at curating from an anthropological point of view, but I like creating a narrative.” In 2016, Ritchie Handler, also a fixture of the downtown scene for his drag alter ego, Olivia Neutron Bomb, began collaborating with Mishkan (whose mermaid paintings earned a recent solo show at Shoot the Lobster) and the rest is history. “We’re both creating personas that fill a void,” says Mishkan.

In his twenties, Terrell Tilford began buying artworks by seminal Black artists. “At one point, I probably had installment plans going on with five different galleries,” says Tilford, who worked as an actor before he became a gallerist, establishing the Artist Showcase Series in New York with four other budding dealers. “I laugh now because the acronym was ASS,” he says. In the early aughts, Tilford and his wife, actress Victoria Platt, moved to L.A. and spent a year hosting shows out of their Mid-City home. “We moved all of our furniture out on the weekends,” says Tilford. Then, in 2015, Tilford relaunched his art group as Band of Vices. Since, they’ve become kingmakers for emerging talent like Grace Lynne Haynes and Penda Diakité. But Tilford steers clear of the frenzy around BIPOC artists. “I tell my staff, “Let’s just do the work,” he says.