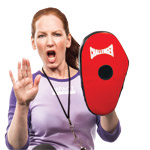 ➻ “A girlfriend of mine took the women’s basic class back in 1991, and she brought me to the graduation ceremony. I came to classes to learn how to fight, but what I walked away with was how to communicate, how to look aware and confident even if I don’t feel that way.”

➻ Adair, a Texas native who does product placement in films, is the lead instructor at Impact Personal Safety, where she’s been teaching self-defense to women (and occasionally men) since 1997.

➻ “There are women who have taken one or two classes and have defended themselves with only a couple hours of training. It’s that quick. The body is designed to protect itself and stay alive. We work with those survival mechanisms.”

➻ The women’s basics course meets for six weekly sessions—a total of 21 hours of training in full-contact and verbal techniques.

➻ “Many of our ‘attackers’ are actors, and they make it so the worst fight a student gets into is in class. If someone comes up to you and goes, ‘Hey, bitch!’ you can say, ‘That doesn’t faze me.’”

➻ “Some of my students have told me that when they first moved to L.A., they were afraid to go out at night, so they made their world very small. Because we are alone a lot in Los Angeles, it is a good thing to have these skills. You just feel safer.”

➻ During the women’s liberation movement of the 1970s, the self-defense initiative exploded and began to incorporate several elements of martial arts, including Krav Maga and jujitsu.

➻ “I am the only student ever to have broken her own nose in class. It was the class against an armed assailant, and it was a [practice] knife fight. But my body didn’t know the difference between a real and fake confrontation, so when we got into it, I was fighting for my life.”

➻ The ready defense stance is feet wide, with one foot back for balance and mobility. One hand is raised chest-high with palms open and facing outward.

➻ “On a man or woman there are only two targets a person has to go for: the head and the groin. If you can’t get to one, get to the other.”