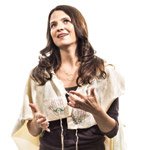 ➻ “When I was 20, I was part of a seminar in Jerusalem where they were trying to convince wayward Jews to become religious. During a slide presentation, I realized that I didn’t believe what they were saying, but I did believe in God and that I was being called to do this work. When the lights went on, I was crying hysterically. The guys came over and said, ‘What did you think?’ and I said, ‘I’m going to be a rabbi.’”

➻ Instead of forming an affiliation with a specific temple, Rabbi Brous founded IKAR, a progressive Jewish spiritual community that’s been attracting young, unaffiliated Jews since 2004.

➻ “There’s a device that DJs use called a crossfader, which takes two songs that feel seemingly incongruous and moves people from one experience to the other. That’s what we’re trying to do with Judaism: take these ancient, powerful rituals and introduce them so seamlessly that people might not even notice they’re in the midst of a powerful conversation about an ancient practice.”

➻ Newsweek named Brous one of the “50 Most Influential Rabbis in America” five years in a row. She was in the top five in 2012, the first time for a female rabbi.

➻On June 3, 1972, Sally Priesand became the first woman in America to be ordained as a rabbi. Since then, more than 350 women in the United States have become reform, reconstructionist,and conservative rabbis.

➻“At any given Shabbat there will be a few hundred people at each service. On the High Holy Days we have around 1,800 people.”

➻ Los Angeles is home to the nation’s second-largest Jewish population (New York has the biggest), with more than half a million followers.

➻ “The driving force behind Jewish life in the previous century was guilt. People went to synagogue because they felt a sense of obligation to go in the aftermath of the Holocaust, because Israel was so fragile and because of anti-Semitism. That’s no longer a driving force, particularly for young people.”

➻ In 1931, the Canter brothers opened the landmark Canter’s deli in Los Angeles, which has sold more than 7 million pounds of pastrami and more than 10 million matzo balls.

➻ “My favorite kosher place to eat in L.A. is my kitchen. My husband’s an amazing cook!”