Home Art Pottery Throwing Is Having a Moment 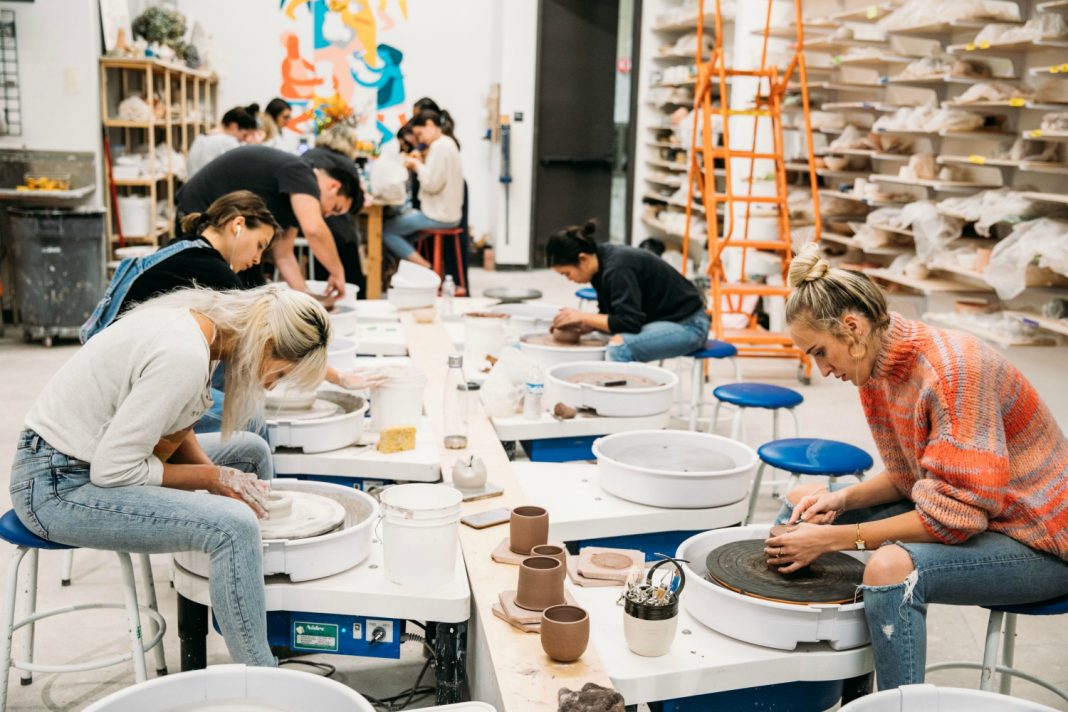 Once seen as the province of retired ladies, bored married couples, and birthday kiddos at Color Me Mine, pottery is having a moment in the cultural spotlight not witnessed since the sexy turn by Demi Moore and Patrick Swayze in 1990’s Ghost.

Serena Williams and Emily Ratajkowski have posted photos of their turns at the wheel. The Kardashian sisters bonded at an outpost of local pottery chain Bitter Root on their reality show. British tabloids have reported that Brad Pitt and Leonardo DiCaprio bro out while throwing pots at Pitt’s home. In the past nine months, Seth Rogen has chronicled the evolution of his clay works on Instagram, from sweet (if slightly sloppy) ashtrays to an Etsy-worthy collection of vases.

Technology seems to be driving millennial and Gen Zers to pottery from both
directions. While social media posts by celebs and friends are encouraging newbies to spin the wheel, working with clay also provides a tactile break from staring at screens and scrolling through social media.

“Your hands are literally in mud,” says Mel Keedle, the co-owner of Still Life Ceramics, of the craft’s draw. “You can’t touch your phone for hours.”

Still Life, which opened in ROW DTLA in 2018 and expanded to Santa Monica in December, is one of a number of new studios and shops looking to feed Angelenos’ growing hunger for pottery. Claytivity joined the fray in Silver Lake last August, attracting a crowd of cool retirees and Eastside hipsters. POT (#notadispensary), a pottery studio owned and operated by people of color, opened in 2017 to serve as an alternative to the city’s more staid studios. Bitter Root, one of the godparents of L.A.’s pottery scene, expanded from Beverly Grove to a studio in Topanga Canyon in 2015 and added a third location in
Valencia in 2018.

As Rogen can attest, there’s a learning curve when it comes to throwing—and successfully firing—a good vase. Beginners can expect to put in many hours before producing a serviceable result. But, Keedle says, that’s part of the fun. “There is no instant gratification,” she says. “There are things you can’t control. Things will break. That’s part of the process.”

Carl Cortes, 49, a creative director and student at Still Life, took his first class a little over a year ago with his then-girlfriend. He was soon hooked. “I did it for a girl,” he says with a laugh. “The girl is gone, but I kept the ceramics.”