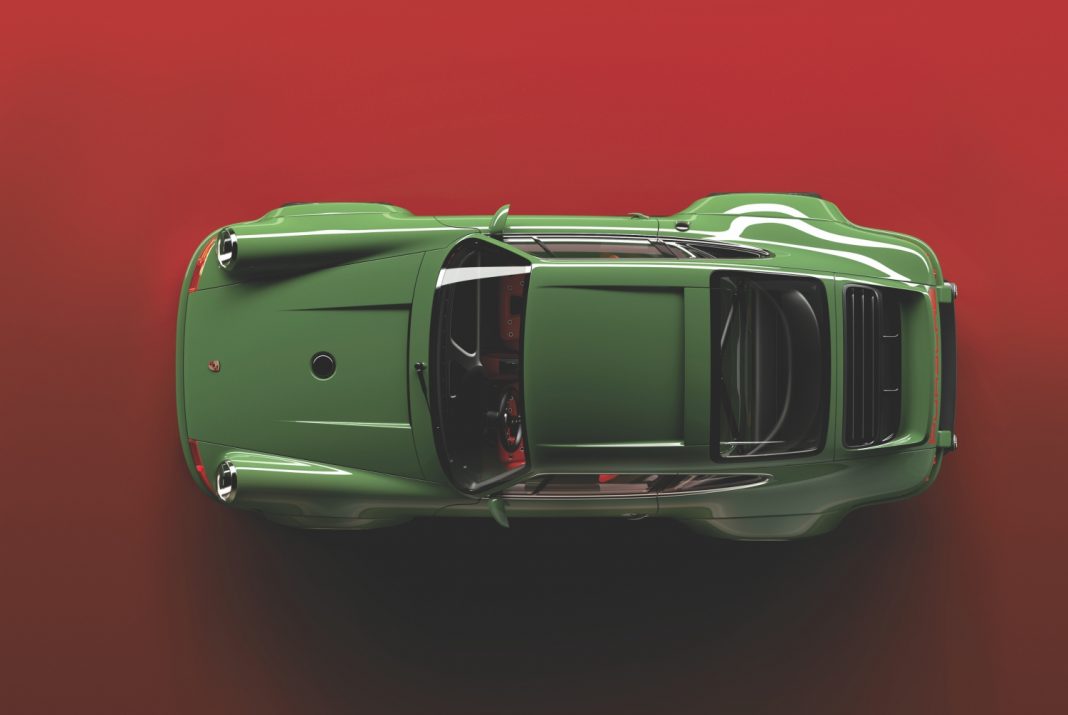 The seductive $600,000-plus supercars coming out of Singer Vehicle Design in Sun Valley started out as decades-old Porsche 911s before being rebuilt by Singer founder and Porsche fanatic Rob Dickinson to a standard of mechanical and aesthetic excellence that even the carmaker itself never imagined.

The list of optimized features reads like car porn—voluptuous carbon-fiber fenders, a gold-anodized intake manifold, bespoke taillights, and an elegant Momo Prototipo steering wheel. “I didn’t care how much the car cost,” Dickinson says. “I knew that if I could make it look good enough, I’d want it, and customers would want it, and they wouldn’t care if they had to pay more money for it.”

Dickinson amps up the sex appeal with hot-rodded air-cooled engines that spark to life with a breathy rumble; and at redline, the flat-6s emit a hypnotic snarl unlike the guttural roar of an American V-8 or the shriek let loose by a 12-cylinder Ferrari. The shape is unmistakably 911 but better, with wider fenders, smoother radii, and impossibly minute body gaps. Dickinson offers 75 custom-blended colors, most of them retro-ish and subdued but all applied so immaculately that the cars appear to have been carved out of solid blocks of metal.

Sumptuous details, including hand-woven leather dashboard panels and seats, read like ultra-luxe interior design. The tweaks seem at once excessive and essential—on one level, they’re nothing more than standard “tuner” fare boosting performance, but at their core, Dickinson’s cars pay homage to Porsche by revealing and showcasing the soul of the world’s most venerable sports car.

Contemporary hypercars are so over the top, with hybrid power trains, electronic wizardry, and look-at-me styling, they seem more like video-game vehicles than mechanical contrivances. The machines fashioned by Dickinson, on the other hand, are proudly analog creations.

“We’re celebrating the golden era of the Porsche 911 with the benefit of hindsight, a fresh perspective, and new materials,” Dickinson says, his British accent untempered by 16 years in Southern California. “It’s us doing our thing but being respectful of Porsche’s conservatism, their design language, their history—everything that the 911 stands for. We’re just turning the volume up to 11.” In fact, all of SVD’s custom cars have tachometers that go to 11.

The Spinal Tap reference is apt coming from Dickinson. Although he was trained as a car designer, he made his name as the lead singer for alternative-rock band Catherine Wheel and, at 53, can usually be found in shorts, a T-shirt and one of his 65 Goorin Bros. military-style cadet hats. It was as a musician that he first visited Los Angeles in 1992.

“We were collected at LAX by one of the guys at our record company, who took us out to his house in Malibu,” Dickinson recalls. “I remember sitting in the back of his car going, ‘Why the fuck would you want to live anywhere else?’ The weather was fantastic. The girls were gorgeous. The car culture, the optimism, the encouragement to dream—everything I fell in love with. This project never would have happened in England.”

A decade later, while living in West Hollywood, he modified an old 911 to use as his daily driver. Retrofitted with a larger engine, bigger wheels and tires, and more dramatic bodywork, his so-called Brown Bomber was a quintessential café racer, comfortable on both road and track. So many people offered to buy the car that he went into business in 2008.

A friend suggested that the first prototype be dubbed “Norbert” in honor of legendary Porsche racing engineer Norbert Singer. Dickinson decided that “Singer” sounded better, especially since it also alluded to his career as a musician (though legally, Dickinson’s reboots can’t be called Singers or Singer Porsches). Singer Vehicle Design started in 25 square feet of rented space in a hot-rod shop along a grimy stretch of the San Fernando Valley full of automotive junkyards. In Dickinson’s design studio, Singer’s motto is spray-painted on a wall: “Everything is important.”

Some major subsystems come from local vendors—the jewel-like engines courtesy of Ed Pink Racing Engines in nearby Van Nuys, for example, and the flawless bodywork from Aria Group in Irvine. But most of the work is now performed in-house by 100 employees in eight disconnected buildings. “We need to be under one roof,” Dickinson admits. “But being in this shithole is an odd part of our charm. Customers see us putting the money where it needs to go instead of some fancy showroom, and I think they respect that.”

The company has already completed 125 restorations, with orders for another 125. Meanwhile, Dickinson is ready to start delivering a much more exotic model dubbed the DLS, for Dynamics and Lightweighting Study. Developed in concert with a British Formula 1 race-car manufacturer, the DLS will start at $1.8 million, with commissions capped at 75 cars. The lucky (and filthy rich) owners will get the most exotic air-cooled engine ever built and Dickinson’s signature touches, ranging from an exposed carbon-fiber-and-magnesium gearshift assembly to a tachometer with gold trim applied by a supplier to Bugatti.

Dickinson is coy about what he’s planning next, though he acknowledges that the “Vehicle Design” in the company name suggests more ambitious goals. “As a serial car pervert, there are many other things that I want to do,” he says.