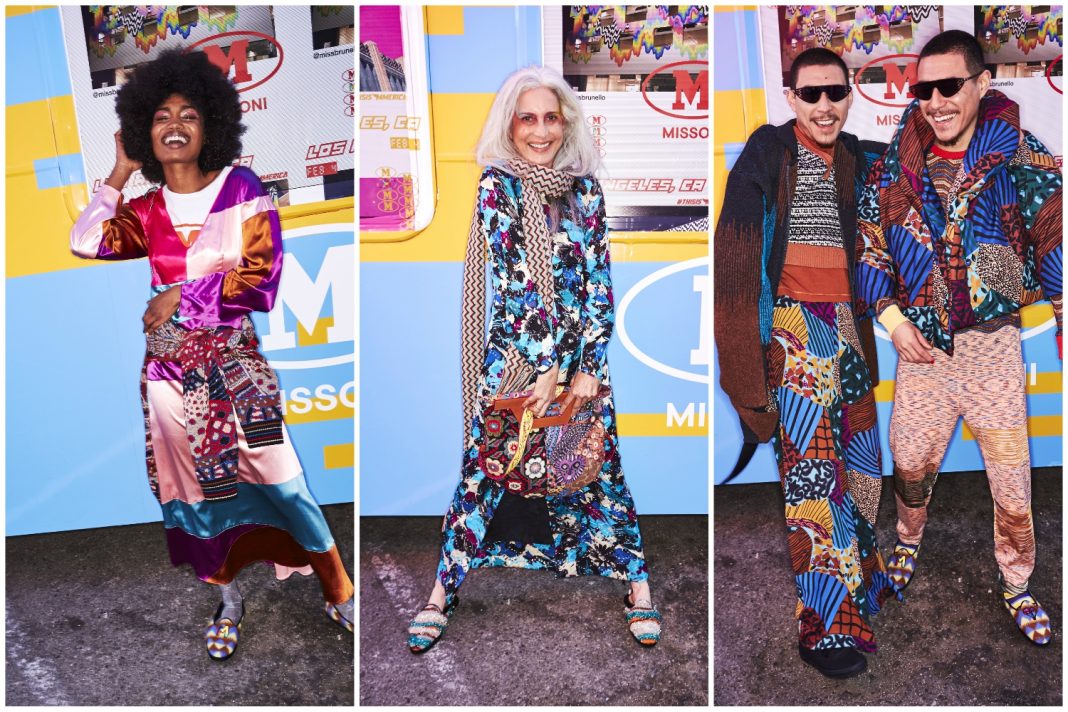 As movie stars, models, and members of the press swarm the city in advance of the Academy Awards on Sunday, three big-name designers are showing their fall/winter collections here rather than Milan or New York: M Missoni, Baja East, and Tom Ford. And this is in the midst of New York Fashion Week.

On Tuesday, M Missoni—the Italian knitwear giant’s more affordable iteration—kicked off the festivities with an outrageous show at Pink’s Hot Dogs on La Brea. The so-called “moving presentation” involved models being brought in by sightseeing bus and then cutting a rug outside the iconic fast-food joint.

Why show in L.A.? “It’s’a place where fashion is not constrained by the rules of the system and is positively influenced by different lifestyles and passions,” Missoni told WWD.

Baja East, Angeleno Scott Studenberg’s eight-year-old label, is also showing in L.A., even though it usually shows at New York Fashion Week. The clothes are based on the idea of “loose luxe” in beautiful fabrics, for both men and women. How L.A. is that? The fall/winter 2020 runway show, themed “Desert Disco,” in going down on Friday, February 7, in the basement club at the West Hollywood Edition Hotel, and will feature models from both L.A. and N.Y. (a number of supermodels are flying out to walk in Tom Ford later that evening). Among the celeb expected? Christina Aguilera, Sophia Bush, and Miles Richie.

Studenberg was planned on doing his show in L.A. even before Ford announced. “Last season, I brought the West Coast to the East, uprooting my Laurel Canyon living room, and now I’m inviting everyone to a desert disco in my hometown,” he told WWD. Now, will Billy Porter be showing up? He did wear a Baja East caftan to the Globes, after all.

Tom Ford’s Oscar weekend show actually has precedent: he showed here, also at Milk Photo Studios on Cahuenga, in 2015, with a pre-Oscars crowd that included Beyoncé and Jay Z, Sophia Vergara, and many other A-listers. Ford pissed off other New York designers then—and now—by bringing out major supermodels, and it’s hard to believe Kaia Gerber, Gigi and Bella Hadid, and Kendall Jenner won’t make an appearance in front of what’s sure to be a staggering front row. Brad Pitt wears a lot of Tom Ford, and so does Zendaya.

“The decision to show in February in Los Angeles feels very natural to me. It is my home and has a strong impact on the way that I live and work within both the fashion and film worlds,” Ford said. “This year, the New York Fashion Week calendar exactly overlaps Oscar weekend, and the last time that happened I showed in L.A. and it worked quite well,” Ford told WWD. “There is truly no bigger or more prominent stage in the world at any given time than Los Angeles during the Academy Awards.”

However, this time around, Ford is president of the Council of Fashion Designers of America, and some in the group consider this a betrayal because it will take models and editors—not to mention energy—away from New York Fashion Week. Of course, Ford’s loyalty has always been celebrities, who do so much more for his brand than any other kind of press could.