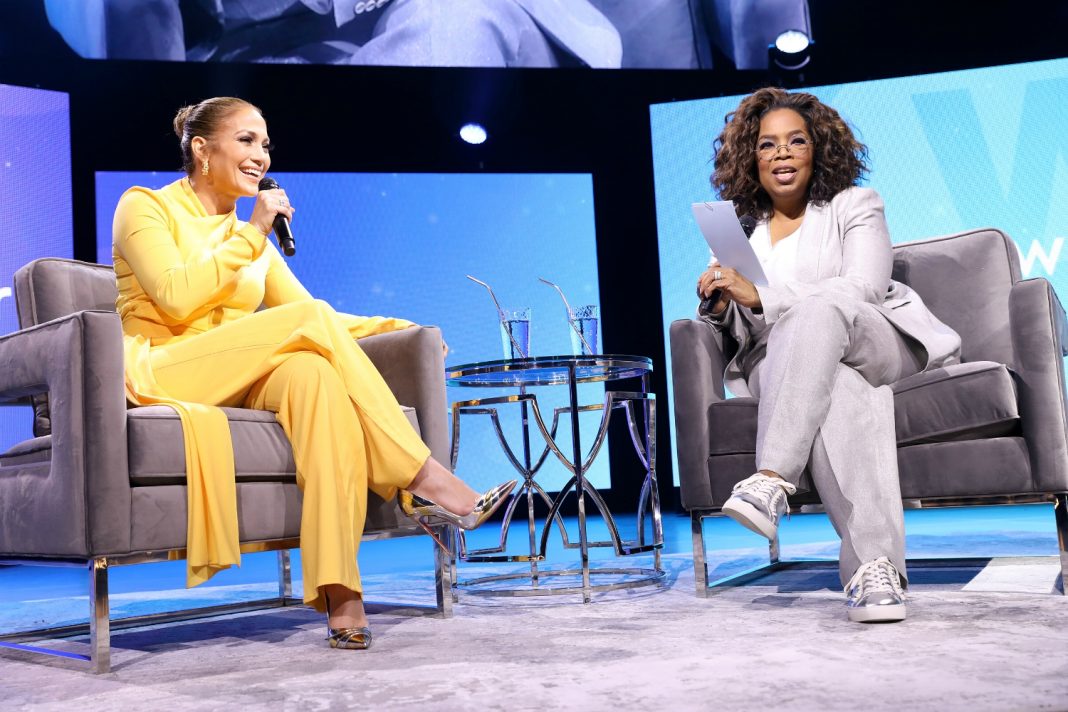 Even blocks away from the Forum, you can feel Oprah’s gravitational force. Traffic snarls around the venue as motorists with Orange County license frames honk at hapless traffic guards, desperate to get into the parking lot. Still, the mood is jubilant. “I’m at the Oprah Winfrey show!” a parking lot assistant exclaims into his phone while passing a group of anti-vaxxers holding signs.

No, Oprah is not swooping in to save the Democratic Party—at least not yet. Instead, she is doing elaborate branded content for a company that produces small frozen meals and assigns points to edible goods. Oprah’s 2020 Vision Tour is an all-day event—like school—meant to transform the “mind, body, and spirit” of attendees, and is sponsored by WW (or Weight Watchers).

At the media sign-in, a woman hands me a low-cal cookbook wrapped in a pretty bow before looking down at her phone and twisting her face in horror. “Oh my god,” she says. “Oprah just fell down.”

Oprah had been talking about achieving “balance” when she fell, her flowy white pantsuit rippling in the wind. Thankfully, she regrouped quickly and by the time I enter the auditorium, the 66-year-old billionaire media mogul is already deep into delivering a lesson about achieving “the highest version of yourself” to a rapt audience of nearly 14,000.

“What is holding you back?” she asks the crowd, channeling a very ’90s strain of self-help that is more concerned with banishing internalized doubts than addressing things like structural inequalities.

Still, it’s comforting to think that we could all achieve anything we put our minds to, were it not for our own inner critic. And I quickly remember that Oprah is also funny as hell: she talks about being scared of her grandmother’s giant breasts (which she pronounces “breast-esis”) and says that’s why she now hugs children from the side. Even when she’s describing a recent pneumonia scare, she manages to turn it into a joke about how her doctor was scared to have her as a patient, lest she die on his watch. The folks around me seem to be laughing not out of shock or surprise but deep relief and identification, her honeyed voice distracting us from the Coronavirus alerts bombarding our phones.

As we fill out workbooks meant to gauge our satisfaction with life, Oprah walks through the audience, peeking at our answers. (According to mine, I’m an emotional basket case.) “Oh Jesus!” someone screams when she pops up behind them. This being L.A., it seems like everyone she talks to has something to promote, but our host knows how to handle it: when one man who lost 160 pounds starts shilling his book, Oprah gives him a hug and succeeds in getting him to shut up.

In many ways, though, it’s a bizarre moment in time to be taking Oprah’s advice seriously. The television host-turned-tycoon has long offered spiritual guidance and materialist solutions to middle-class anxieties, but they seem out of step with the plans proposed by nearly all of the Democratic presidential contestants. What good is a “wellness intention,” which her workbook encourages us to set, when so many people can’t afford to see a doctor?

Likewise, when Oprah says “Life is going to give you the experience you need for your own evolution,” the mantra sounds similar to the idea that it’s god or the universe’s plan for bad things to befall certain people—say, being evicted or become homeless—because it will help them grow. These ideas don’t necessarily seem to reflect where Oprah is at politically—in her Golden Globes speech, she linked her mother’s struggles to those of abused women workers and called out systemic sexual harassment and gender discrimination in Hollywood—but they make up the philosophy she is selling to tens of thousands across the country.

Her thinking on weight-loss seems a little more evolved. She treats her own “journey” as fodder for a standup set: “[Longtime partner] Stedman and I went on a cleanse together,” she says. “Don’t do it! You get evil without bread.” She then does an impression of Stedman begging her to eat a biscuit. She’s quick to note that some people feel comfortable at any size, and that’s OK! When a local teacher is trotted out on stage for losing over a hundred pounds, she tells the audience that we should love ourselves at every stage of our weight loss journey.

Our own travels involve a simple boxed meal from Panera. As we file out of the auditorium for our lunch break, we find a ring of selfie-stations where we can pose alongside Oprah’s beaming face or hold vegetables in front of a backdrop of Oprah’s farm. (To the surprise of no one, a representative tells me the veggies aren’t actually plucked from Oprah-owned soil.)

“I’m in the Oprah cult,” says Beatrice Friedman, a retired speech therapist who drove from San Diego to attend the Vision 2020 tour for her birthday. “This particular tour is different from anything she’s done before, and I’m just in that spot where I’m ready to dive in for some more wellness.”

A group of sorority sisters who’d stayed in touch well into their professional lives told me they appreciated Oprah’s take on FOMO (she says she has JOMO, or Joy of Missing Out) as well as answering questions like “What’s your why?” to figure out why they want to accomplish a certain goal.

I wondered about my own life goals as we filed back into the auditorium for a dancing class led by Julianne Hough, a meditation session from Jesse Israel, and an interview with Jennifer Lopez (elsewhere on the tour, O was joined by Dwayne Johnson, Tina Fey, Michelle Obama, and other huge names). Was my highest calling endlessly refreshing Twitter, desperate for the freshest memes? Was I living my life’s purpose by obsessively washing my hands?

There’s a Hallmark card quality to the kind of life advice Oprah is selling, but its potency stems from its deep familiarity. What kind of American isn’t nostalgic for an afternoon spent sitting in the living room, enjoying a deeply satisfying parasocial relationship with a rich, empathetic woman who seems to have it all figured out?

Even when Oprah later bragged about the number of trees in her backyard (6,300; she hired a “tree counter” to tabulate), I didn’t think much about how absurd it was that one person could own so much property. Exhausted and desperate for some kind of truce, the rational part of my brain had temporarily short-circuited. All I could think was, “Wow, seems nice.”

RELATED: There’s Already an “Oprah for President” Billboard Up in DTLA

Yvonne Orji Was Headed to Med School, but God Had a Different Plan