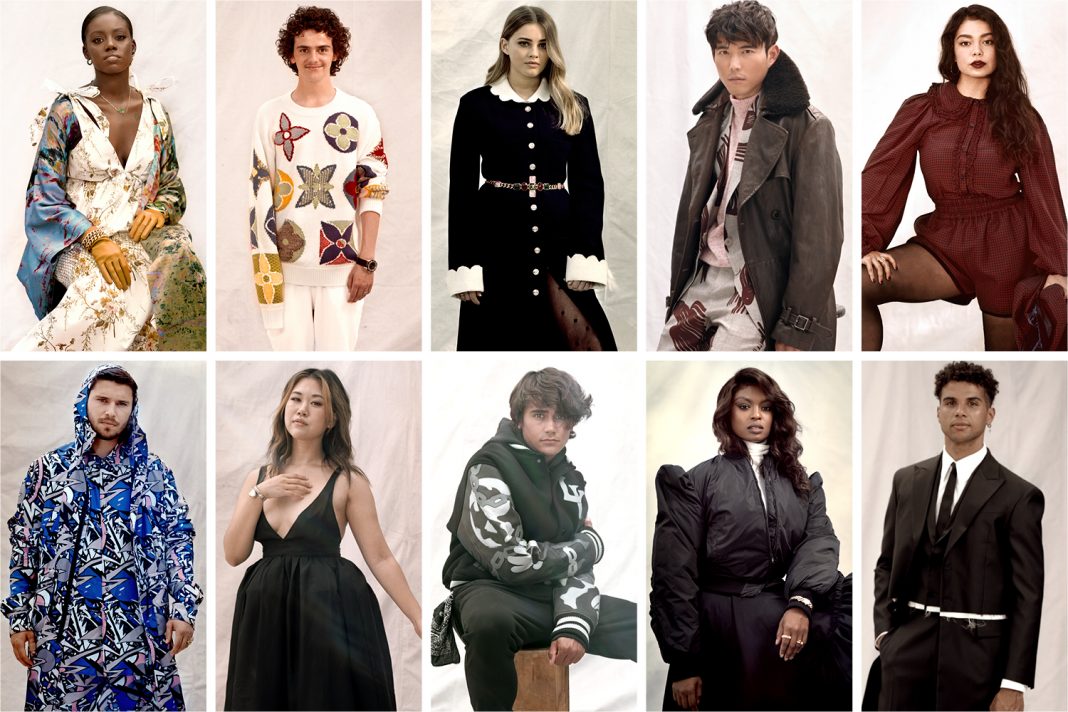 Mason Gooding might be the son of Academy Award-winning actor Cuba Gooding Jr., but he’s making his own name in Hollywood. In his role as Andrew, the antagonist on Hulu’s Love, Victor, Gooding hopes to show a new side of bullying. “You realize he’s the way he is due to his self-imposed insecurities and problems with self-image,” says Gooding, who was bullied in high school for being overweight. “It’s cathartic, the idea that I could embody something that as a child I thought was never possible.”

Even if you haven’t seen Auli’i Cravalho in a movie before, you’ve probably heard her: the native Hawaiian made her debut as the voice of Disney’s animated Princess Moana in 2016. Now she’s staking her claim in Hollywood with leading roles in the forthcoming Amazon Prime series The Power, and in the teen Netflix film All Together Now, which dropped August 28. Cravalho also generated some buzz back in April when she came out as bisexual in perfect Gen Z fashion—via TikTok.

Age 22, After We Collided

Before Josephine Langford made it in Hollywood, she passed out flyers in a shopping center while wearing an Elmo costume. “It gets really sweaty in the suit,” the Australian actress says. “I think I got in trouble once because a kid dabbed at me, and I dabbed back!” Luckily, following her 2019 breakout performance as Tessa Young in the movie After, Langford won’t have to don the Elmo suit again anytime soon. Many say that the After series, based on the popular books by Anna Todd, is positioned to be the next Twilight. The sequel, After We Collided, premieres in theaters on VOD October 2.

Jack Dylan Grazer is the youngest talent on our list, but the upstart actor already has an impressive résumé. Following leading roles in the films Shazam!, It, and It Chapter Two, Grazer will star in Luca Guadagnino’s hotly anticipated HBO miniseries, We Are Who We Are. The show, which is set to premiere on September 14, tells the story of Fraser Wilson (Grazer) and Caitlin Harper (Jordan Kristine Seamon), two teens who approach adulthood on an American military base in Italy. When he’s not acting, Grazer can be found perfecting his kickflips at skateparks across L.A.’s westside.

Though Ramona Young had a minor role on Santa Clarita Diet, her performance as a deadpan drugstore clerk earned her a reputation as a certified scene stealer. Now Young is receiving praise for subverting Asian American stereotypes in her portrayal of Eleanor Wong, a boy-obsessed, theater-loving teen on Mindy Kaling’s painfully funny new comedy series, Never Have I Ever. The already-prolific actress says she wants to also write, produce, and make her own movies. During the lockdown she’s been working on a nineteenth-century Western about a Chinese heroine’s journey to rescue her long-lost father.

Birgundi Baker has the performing arts in her blood. As a child, the North Carolina native often drove to New York City with her family to watch her aunt perform in student acting showcases at Juilliard. Through her performance as Kiesha Williams on Lena Waithe’s Showtime drama The Chi, Baker hopes to amplify the voices of missing and abused Black women. In the third season, which debuted June 21, Baker’s character was promoted to a series regular. She’ll also play the main character in the forthcoming short film Circuit, which sheds light on sex trafficking.

Age 30, The Umbrella Academy & After Yang

Justin H. Min is quickly building a rep as a bona fide supernatural star. On Netflix’s The Umbrella Academy, the second season of which premiered on July 31, Min has become a fan favorite as a ghost named Ben Hargreeves. The breakout role earned him a spot as a robot in Kogonada’s forthcoming A24 sci-fi flick, After Yang, alongside Colin Farrell and Jodie Turner-Smith. “While I was on a plane ride, my manager sent me the script and I just started to weep,” says Min. “The woman next to me was like, ‘Are you OK?’”

In preparation for her starring role in the CW series Batwoman, Javicia Leslie has taken up Thai boxing. Leslie’s name made waves in the entertainment industry when, following the sudden departure of then-lead Ruby Rose, it was announced that she would become the first Black bisexual actress to play Batwoman. “I knew that this was something that was just so much bigger, and it made me kind of reevaluate the role,” says Leslie. “Even though I’m doing something I love, I get to change the world while I do it.”

When Michael Cimino moved to L.A. two years ago, he spent his nights working as the mechanical-bull operator at a West Hollywood steak house. Now the actor is turning heads as the main character in Hulu’s LGBTQ drama Love, Victor, which debuted June 17. The show, a spin-off of the 2018 film Love, Simon, follows teen Victor Salazar as he struggles with his sexuality in a conservative Latin household. While Cimino, who is of Puerto Rican and Italian German descent, has been lauded for his performance, he’s quick to say “I still feel like I’m just a kid from Vegas.”

Though Ronen Rubinstein was born in Israel, his latest television role is deeply American. On Ryan Murphy’s 9-1-1: Lone Star, Rubinstein plays T.K. Strand, an openly gay firefighter and recovering opioid addict who relocates with his father (Rob Lowe) to Austin, Texas. Rubinstein says the show, which premiered in January, has inspired many first responders to come out to him. “To be able to have that trust and compassion from a complete stranger…that’s sort of all we could ask for,” he says. “People are seeing themselves onscreen, maybe for the first time ever,” he says.