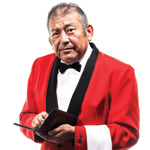 “I started working at Musso & Frank when I was 19 years old, in 1972. I was in the Naval Academy in Veracruz, and I came to L.A. from Mazatlán to see my grandmother. My uncle worked at the restaurant and asked me to fill in for a few days—and I stayed. This was my first and only job in my life.”

Gonzalez is married and has one daughter and three grandchildren. Even at 61, he is not the most seasoned server at Musso & Frank (“Musso’s,” to regulars). One fellow waiter is 85 and, by Gonzalez’s count, has worked there for 60 years.

Originally opened as Frank’s Café in 1919, the spot was renamed Musso & Frank Grill when owner Frank Toulet teamed with restaurateur Joseph Musso in the early 1920s. It was sold to Italian immigrants Joseph Carissimi and John Mosso in 1927 and has been a Hollywood Boulevard fixture ever since. Today Mosso’s three granddaughters and their children run the place.

Legend has it that Charlie Chaplin challenged Douglas Fairbanks to horseraces down Hollywood Boulevard. The winner generously paid for lunch at Musso’s.

“Celebrities come in often. My first customer was Buddy Ebsen, from The Beverly Hillbillies, and one of my regulars was Steve McQueen. Johnny Depp and Keith Richards are my favorite customers. Me and Johnny, we go back so many years. I have the most celebrities—very loyal clients.”

French chef Jean Rue created the menu, much of which has remained unchanged for 94 years. Two of the signature dishes are steaks and flannel cakes.

According to the most recent survey by the Bureau of Labor Statistics, there are 2.3 million food servers working in the United States, with a mean annual wage of $20,710. Servers in some fine-dining restaurants can make up to $20 to $50 per hour in tips.

“Sometimes I’d rather be working here than in my house because my wife will say, ‘Sergio, do this, do that, bring the ladder!’ And I’ll say, ‘No, honey, because if I have an accident, I won’t be a waiter anymore! Send somebody else to do it!’ ”