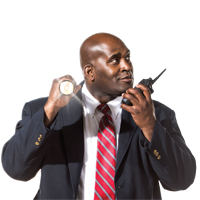 ➻ “I didn’t know much about art. I’d worked at nightclubs and high schools, so I wanted to know what this experience would be like. I also live about five miles from the museum, so it’s convenient.”

➻ Terry, 46, has been with the AlliedBarton security company since 2001. In 2009, he was assigned to work at the Los Angeles County Museum of Art. He has also trained at the Grossmont College Police Academy.

➻ “I consider LACMA my second home, and the pieces are like my possessions, only I can’t act like they’re my possessions. I have to be professional and kind. I have to say, ‘Please don’t touch that—you might damage it.’ Customer service here is everything.”

➻ LACMA guards must conduct a minimum of three inspections throughout the galleries during their shifts to ensure the art objects remain secure.

➻ “Everyone should know that they shouldn’t touch anything, so I don’t know why they feel like they can. Even fingerprints are a big deal because you can’t call in the cleaning crew with some Windex to wipe something down.”

➻ Originally established in 1910, LACMA opened in Mid Wilshire in 1965. With a col- lection numbering roughly 100,000 objects, it is the largest art museum in the western United States.

➻ “I’m not a curator or docent. I’m here for protection. We can direct people to a certain artwork, but we can’t tell them about it. At least I can’t.”

➻ A large-scale L.A.-based art theft occurred at the Natural History Museum in 1973, when African artifacts, Indian jewelry, and rare Navajo blankets were stolen—by a security guard. Most of the loot, valued at more than $1 million, is still missing.

➻ “When I’m working, I don’t want to be engrossed in a Picasso while someone is picking something up.”

➻ Picasso’s works are the most stolen in the world; 1,147 of his paintings have been lifted. LACMA has several Picassos, including Weeping Woman with Handkerchief and Head of a Woman.

➻ “I loved the Tim Burton exhibit, and every time I went to the Stanley Kubrick exhibit I had to remember I was at work. I get carried away.”