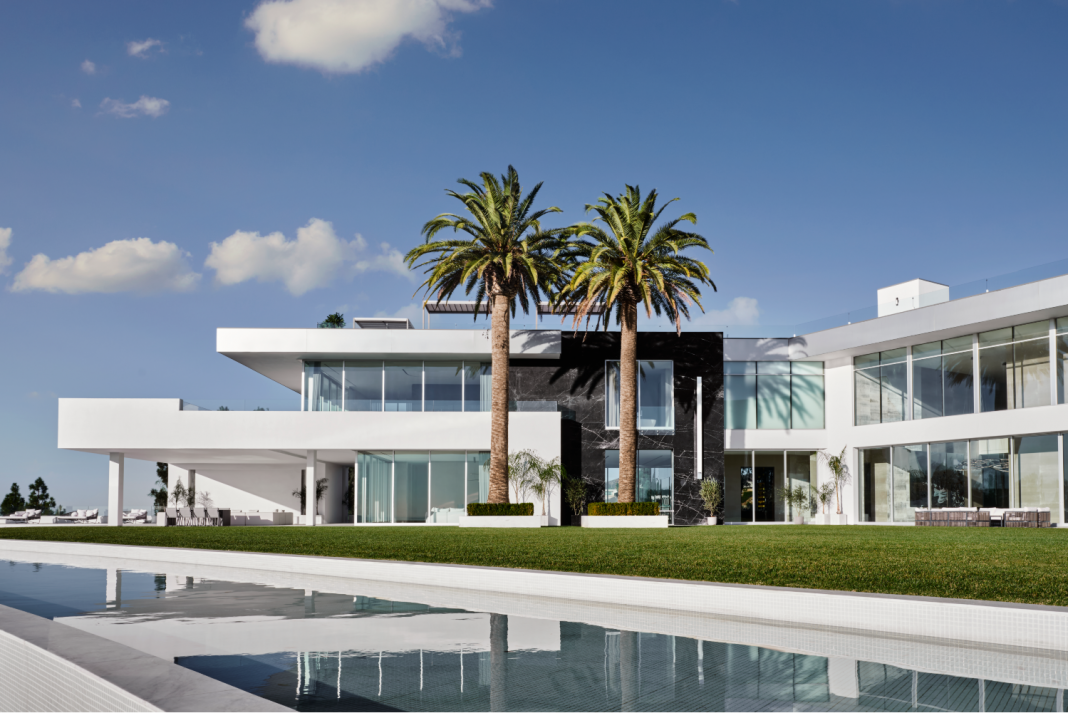 Nearly a decade ago, mega-mansion developer Nile Niami set out to build “the most expensive house in the urban world.” What he came up with is “the One,” an outrageous 105,000-square-foot spec mansion perched on a five-acre parcel in Bel-Air with panoramic views of the plebs below. Its rumored $340 million price tag matches its magnitude, although it falls short of the $500 million Niami had reportedly hoped to reel in for the property.

Designed by architect Paul McClean and interior designer Kathryn Rotondi, the L.A. mansion is set to become the third largest home in America, landing between Oheka Castle in New York (109,000 square feet) and Winterthur in Delaware (96,000 square feet); by comparison, Mar-a-Lago clocks in at a downright cramped 62,500 square feet. The White House? Just 55,000 square feet. According to real estate blog Dirt, the One stretches a full quarter-mile down Stradella Road.

The sheer size is impressive, but the list of amenities is really something (grab a snack; we’ll be here for a minute) and includes: 42 bathrooms, 21 bedrooms, a 5,500-square-foot master suite, a 30-car garage with two car-display turntables, a mote, a 400-foot jogging track, 360-degree views of L.A., 26-foot ceilings, a four-lane bowling alley, a spa level, a movie theater, a 200-cap “philanthropy wing” for charity galas with floating pods overlooking Los Angeles, a 10,000-square-foot sky deck with a putting green, five swimming pools, a juice bar, a cigar lounge, a custom tequila bar, a hair salon, and a gallery with custom-curated artworks by Creative Art Partners.

So, who exactly is in the market for a $340,000 house with a parking garage and a whole-ass wing for “galas”? As GQ explained back in 2015, buyers of “homes” of this magnitude typically “live on other continents and visit these properties for only a week or two each year, using them mainly as places to park their wealth.”

Niami told the magazine at the time, “To be able to say that the biggest and the most expensive house in the world is here, that will be really good for L.A.,” but not everyone has agreed. Much like Mohamed Hadid’s ill-fated, unfinished La Strada, which is set to be demolished once it’s sold, the One’s protracted construction timeline and outsize footprint riled neighbors, inspiring them to form an association and raise $750,000 to enact stricter limits on home sizes.

Sold yet? The home hasn’t been listed, but will be handled by Branden and Rayni Williams of the Beverly Hills Estates, along with Compass real estate’s Aaron Kirman.