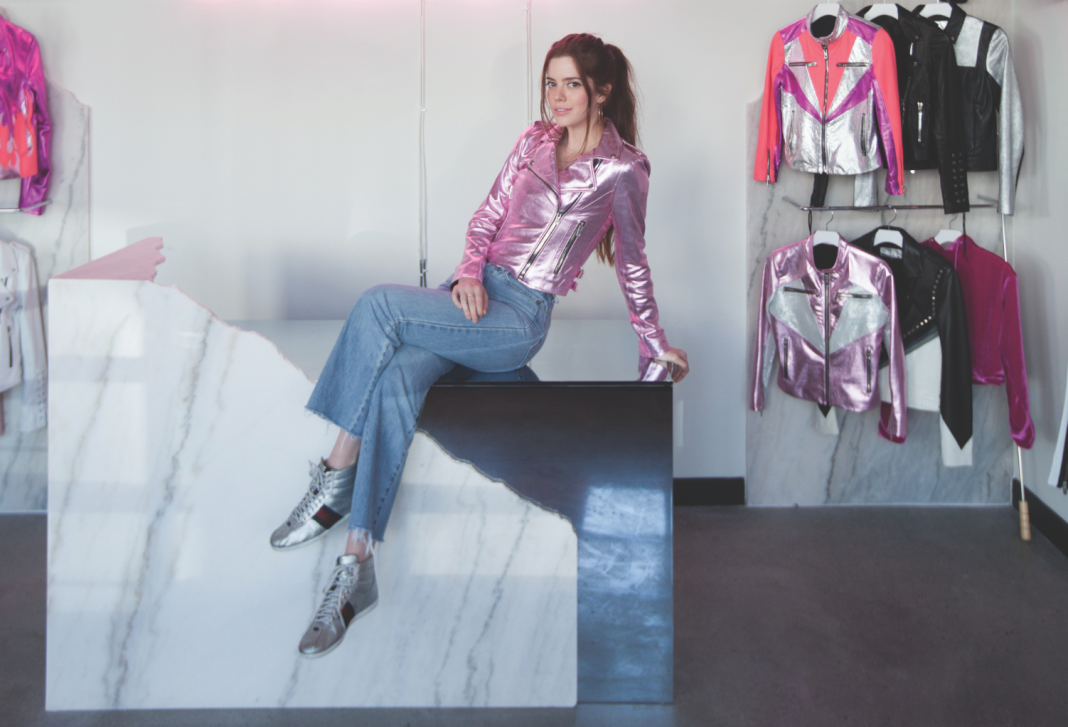 Jessie Willner is known for making slim-fit moto jackets and bombers in colorful, sparkly leathers with luxury fabrics like metallic jacquard and silk charmeuse. A little Ziggy Stardustmeets-Evel Knievel, they’ve been such a hit since she began selling them two years ago under the Mighty Company label that Willner opened a shop on Melrose Avenue in 2017. Now her line is expanding into more retail stores across the country this fall.

Not bad for someone who didn’t graduate from high school, let alone attend a fashion college. As a child Willner was obsessed with making art. When she hit her teens, though, she was expelled after her sophomore year and soon wound up in rehab.

After leaving the facility Willner found herself immersed in art once again, and she parlayed training in technical drawing into a career as a freelance visual artist. But then she began wondering about how to combine that form of art with fashion. Willner considered leather jackets. “I wanted to create something durable and lasting,” says the 26-year-old designer, who has 11 years of sobriety under her belt. “Even if you drop $400 on a blouse, it eventually ends up getting worn out. A leather jacket only gets better with age and can be handed down or passed on.”

Willner taught herself fit and construction techniques and began traveling the globe (on a budget) to track down high-quality leather manufacturers and textile mills—among them Malhia Kent, the company known for supplying Chanel with luxe tweeds.

When she was ready to debut her brand in 2016, Willner invited press and friends to personalize their own jackets at a pop-up event. Gigi Hadid wound up Instagramming a photo of herself in a Mighty Company jacket, and Willner was inundated with orders. “It’s kind of hard to believe that we live in this world of social media where one photo could change the course of your whole business,” says Willner.

She still laughs when she thinks about the fact that an L.A. girl launched a leather jacket collection. “I faced a lot of skepticism on many fronts,” she says. “But I’ve always been so determined to prove myself that I never paid much attention to it.”

RELATED: The Designer Behind 69’s Outrageous Denim Is Devoted to Anonymity