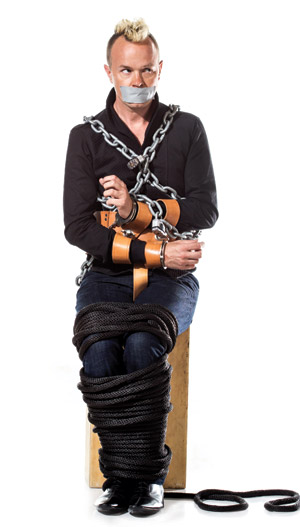 ➻ “I don’t consider myself a magician. I mess around with some of the props, but my passion is the escapes. It’s a whole other world.”

➻ Lovell, a Columbus, Ohio, native, became fascinated with magic as a child after seeing a magician perform at his school. He was soon entranced by the life of Harry Houdini, reading biographies of the legendary Hungarian illusionist and watching the 1953 biopic (starring Tony Curtis) countless times.

➻ “Houdini came to the U.S. from Budapest, escaping his situation and becoming what he desired to be: a world-renowned entertainer. It was not just the locks, cuffs, ropes, and shackles. The part I admire the most is how he overcame things, because we all have obstacles.”

➻ While escapists may rely on fantastic elements, they don’t do tricks. Escapology, as it’s called, involves dangerous stunts based on specific skills, like lock picking, contortion, and mind control.

➻ High-profile performers, such as David Copperfield, can make millions of dollars. Lovell generates most of his income by doing corporate gigs. His fee ranges from tens of thousands to hundreds of thousands of dollars per event, depending on the request—the greater the risk, the higher the cost. He once earned enough to take a 45-day vacation across the country.

➻ “I like to perform my escapes in full view so audiences know what I’m doing. I want them to see how I manipulate the situation and see me struggling underwater, trying to get the cuffs off. You know this guy needs to get out or he’s in trouble.”

➻ When Lovell first put on handcuffs as a teenager, it took him over an hour and a half to get out of them. After months of practice, he appeared on a local television show and was able to free himself in ten seconds.

➻ Among his hundreds of stunts, one of the most treacherous was when Lovell had himself chained and shackled into a “death trap” position, then dropped from a crane into the Singapore River. He did it 18 times in two weeks.

➻ “Everyone has to die eventually, and most of us don’t control that. I choose when and if it’s today.”

➻ Lovell says representatives from MetLife attended one of his performances—then canceled his life insurance. He now uses Lloyd’s of London, a company known for underwriting the unusual, including Betty Grable’s legs and the capture of the Loch Ness Monster. n