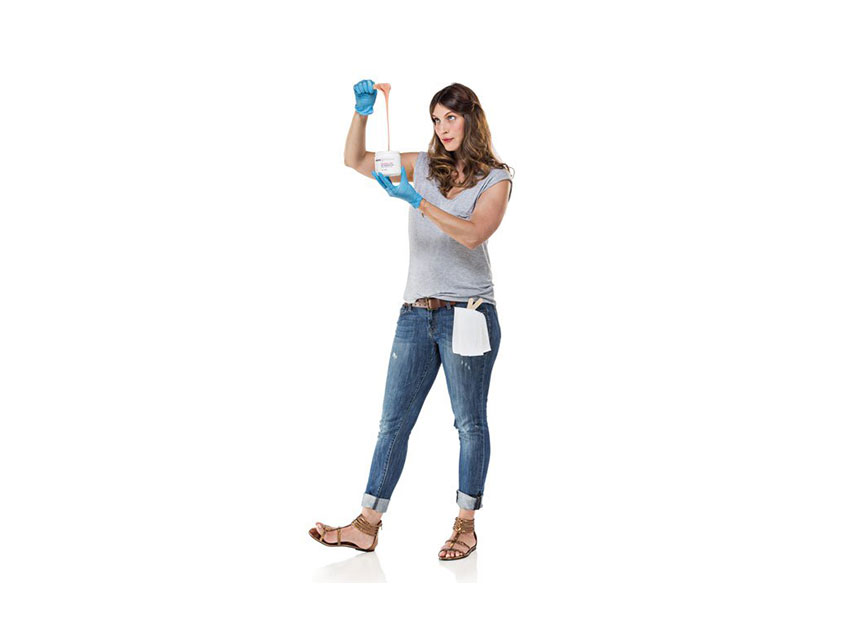 “Clients have to get into compromising positions for Brazilian waxes. Yoga poses are good—I do baddha konasana, which is soles of the feet together, with knees out. And this is very L.A.: If it’s a workday, I choose poses that allow clients to use their phones if they need to.”

Waxing pulls hairs from the roots. Soft waxes are removed with paper or muslin strips; hard waxes are peeled off after they cure.

Before starting at Wax Melrose, Benveniste, 38, was an art school graduate and makeup artist with a particular interest in eyebrows. After 600 hours of training at Culver City’s Academy of Beauty, she received her aesthetician’s license. She has been depilating L.A. ladies (and a few men) for eight years.

“People come in with pictures of Kim Kardashian, and I have to tell them that their brow bone can’t handle her shape. I look at clients’ faces and see what works with their eyes.”

The removal of body hair can be traced back to ancient civilizations: Tweezers from Egypt, dating after 664 B.C., are at the British Museum. In 1987, the Brazilian wax was introduced to this country in a New York salon owned by seven Brazilian sisters. The procedure eliminates nearly all hair “down there.”

“I’ve seen so many vaginas that it has no effect on me whatsoever. It’s like looking at an elbow. It’s nice to have a little hair down there. From my artistic perspective, it breaks up the negative space.”

“I do everything I can to minimize pain. Actors and teenage girls are dramatic. They think of that scene in The 40-Year-Old Virgin.”

In L.A. brow waxing ranges from $10 at Westwood’s Touch of Elegance to $50 at Anastasia Beverly Hills. Wax Melrose charges $35 for brows and $57 for a Brazilian.

On average, Benveniste has 10 clients per day, but she can see as many as 30. The U.S. Bureau of Labor and Statistics reports that “skin care specialists” make approximately $28,640 a year; Benveniste knows aestheticians whose incomes exceed $60,000. On commissions-only wages, she is able to support her family of three.

“I ask clients, ‘Do you want me to slap your vagina?’ If you slap an area before pulling a strip, it doesn’t hurt as much. This is a scientific thing—it really works.”