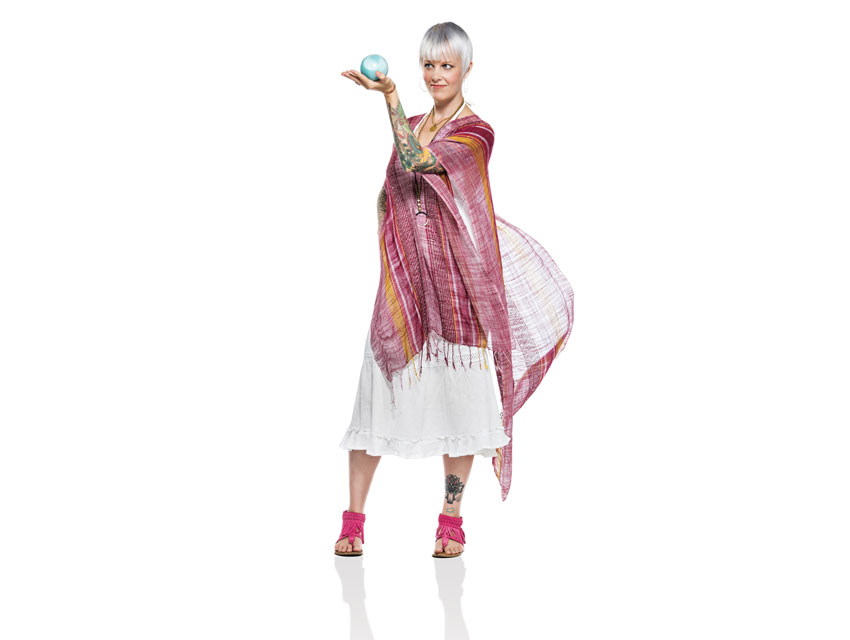 ➻ “I get a lot of clients who are not mystical or spiritual—left-brained lawyers and accountants. And because it’s L.A., I have tons of industry people. Creative types are naturally into what I do.”

➻ Armády, 39, was born in Los Angeles. She dabbled in occult studies on her own before meeting William Kiesel and Daniel Garber—master occult teachers and “like, real wizards,” she says—in her late twenties. They tutored her in practical tarot. Armády is now a senior reader and instructor at the House of Intuition in Echo Park.

➻ “I am very skeptical. Even though I work  in a mystical setting,  I am grounded in reality.”

➻ Tarot cards have been used to cast fortunes since at least the 18th century. A standard deck has 78 cards: 22 Major Arcana cards, or “trump” cards (like the Lovers or the Fool), and 56 Minor Arcana cards divided into four suits (cups, wands, pentacles, and swords). The meaning of the cards depends on their presentation—upright or reversed—and the needs of individual users.

➻ “People are scared to have a tarot reading because of the classic ‘you’re going to die’ [forecast]. But you have free will and the ability to change your life.”

➻ Armády has devoted 15 years to studying Hermetic Qabalah (not to be confused with Madonna’s Kabbalah), an esoteric offshoot of Judaism influenced by Jewish mysticism. She practices Middle Pillar Healing and incorporates crystals, which are laid on the body to “clear the mind of stress.”

➻ “L.A. is steeped in mysticism. Many secret societies and occult lodges had—or still have—their headquarters here. Not a day goes by that I don’t tap into something that goes beyond the images of the cards.”

➻ Lomaland, a Theosophical community founded near San Diego around 1900, paved the way in Los Angeles for scientific self-help groups such as Scientology and hippie-ish communal cults like the Manson Family.

➻ The House of Intuition charges $60 for a 30-minute reading and $90 for 60 minutes. Other psychics in L.A. give $5 readings, but Armády cautions against visiting them.

➻ “The places that offer ten-minute readings are often the ones that see a curse on your family, which you have to pay them all this money to remove. If money is the only remedy, there’s definitely no curse.”

➻ “People come to me when they are dealing with depression, anxiety, breakups, divorces, and major life changes. Sometimes I tell people what they don’t want to hear. If someone says, ‘I have a crush on this person. How do they feel about me?’ I answer honestly. Lying is a waste of money.”

Crystals Might Be Good for Your Aura. But Buying Them Could Be Bad Karma

The Story Behind L.A.’s House of Intuition, Purveyor of All Things Occult