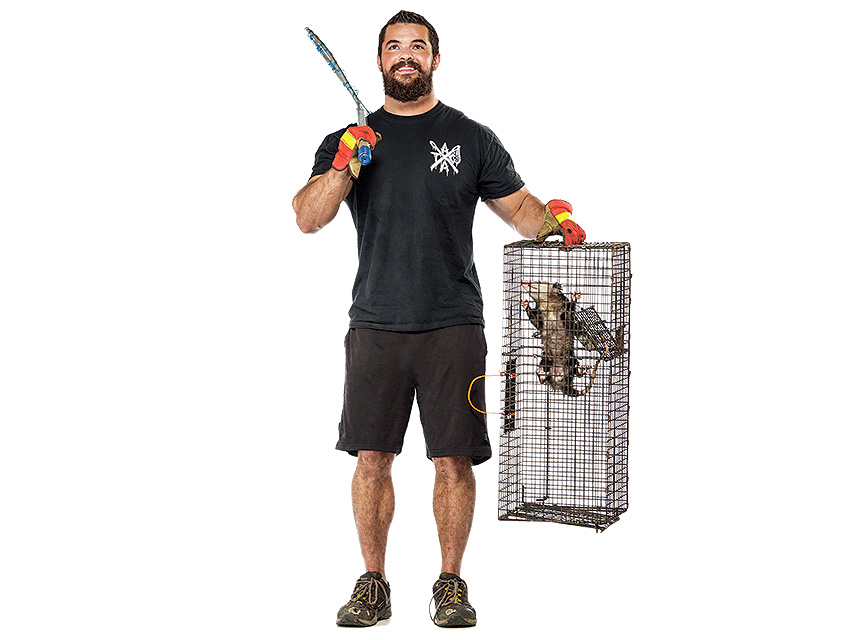 ➻My neighbor was trapping, and I would roll with him and check things out because it’s kind of interesting to watch. That’s how I got involved.”

➻Balderama, 25, is one of a dozen animal trappers who work for All City Animal Trapping & Removal, which handles only small critters. The California Department of Fish and Wildlife is called in for large predators such as bears and cougars.

➻All City rates vary for the removal of a live animal; the average cost is $200. “We’re as humane as can be. Our traps are cage style, with food and everything.”

➻Balderama works on as many as 50 “open jobs”—or trap setups—at a time, spanning Pasadena to Ventura.

➻“The client has to call our office and leave a message if there’s an animal in the trap. We always get to the animals the same day.”

➻Legally, All City is obligated to euthanize the problem animals, though innocent critters (such as the possum pictured here) that unwittingly enter their traps are released. “If I had my way, we could relocate everything, but with the spread of disease, we’re not allowed to do that. If I were to start releasing animals in downtown L.A., it would cause mass chaos, right?”

➻Over four years Balderama has been bitten by raccoons, rats, and a skunk. “I wear gloves so I don’t get my hands too cut up. I wear a mask, but only when I’m in attics. It’s more for the insulation, not the animal.”

➻Recently Balderama was setting traps for possums that were eating a client’s cat food. “My customer told me, ‘Yeah, I’m just one divorce away from moving to Van Nuys and becoming a crazy cat lady.’ ”

➻“Peoples’ emotional attachment to animals is bizarre. Maybe not bizarre but intense. I love animals, but in a healthy way. I don’t have 20 cats. I don’t have feelings like that toward animals. They’re not my little souls.”