Welcome to LAMag’s new weekly social-fashion-about town column L.A. Uncovered, where we’re optimistically praying there are no more party-crashing waves of COVID coming to spoil the upcoming Oscar season and all the frouf that goes with it.

Last week was our first wave of post-Omicron get-out-of-jail-and-the-house activity since early 2022. Winning the Super Bowl on our own turf (how embarrassing would it have been if we lost?) gave this down-in-the-dumps town a jolt of optimism. Then the annual Frieze Art Fair, cancelled last year, contributed almost an electric shock’s worth of buoyancy, not to mention great visuals and people watching.

Frieze Art Fair was held this year at 9900 Wilshire opposite The Beverly Hilton. Previewed Feb. 17-20, the week leading up to Frieze was a veritable blur of parties, dinner parties, and fashion events. It was the Oscars of the art world in terms of sheer numbers of events. Artists, art world denizens and artsy fashionistas descended from New York, Paris, London, Oslo, Budapest, Madrid, Rio de Janiero (where some of the galleries that showed work hail from) dripping in personal style and money to burn—on both art and clothes.

The marriage of art and fashion was cemented decades ago: Elsa Schiaparelli collaborated with Salvador Dali in 1935, infusing her clothes with surrealism. Since then, Louis Vuitton’s collabs with Murakami and Richard Prince, Calvin Klein’s work with Andy Warhol, Coach making chic bags with Jean Michel Basquiat prints, Raf Simmons using artist painted fabrics, happens on a regular basis. But no major luxury brand’s more associated with contemporary art than Prada. Miuccia Prada is a major supporter of contemporary artists—many have directed Prada and Miu Miu fashion films and illustrated designs.

They also created space for a major text and video installation of L.A. conceptual artist Martine Syms (called “HelLA World”), flooding inside and the outdoor social area with violet, pink and green light. The two day event might have been most impressive for the outdoor area built by the Prada team. They added a full-on open air outdoor restaurant in the adjacent Genghis parking lot with a back lounge/library, where well-dressed guests perused art books by Miranda July and Kim Gordon, while imbibing (free) champagne and snacking on (free) Salt and Spicy Tofu,  day and night.

Jeff Goldblum, Rashida Jones, Gabrielle Union, Storm Reid and loads and loads of artists popped by, as well as some of the most creatively attired people this (jaded) writer has ever seen. (And that’s saying a lot.) 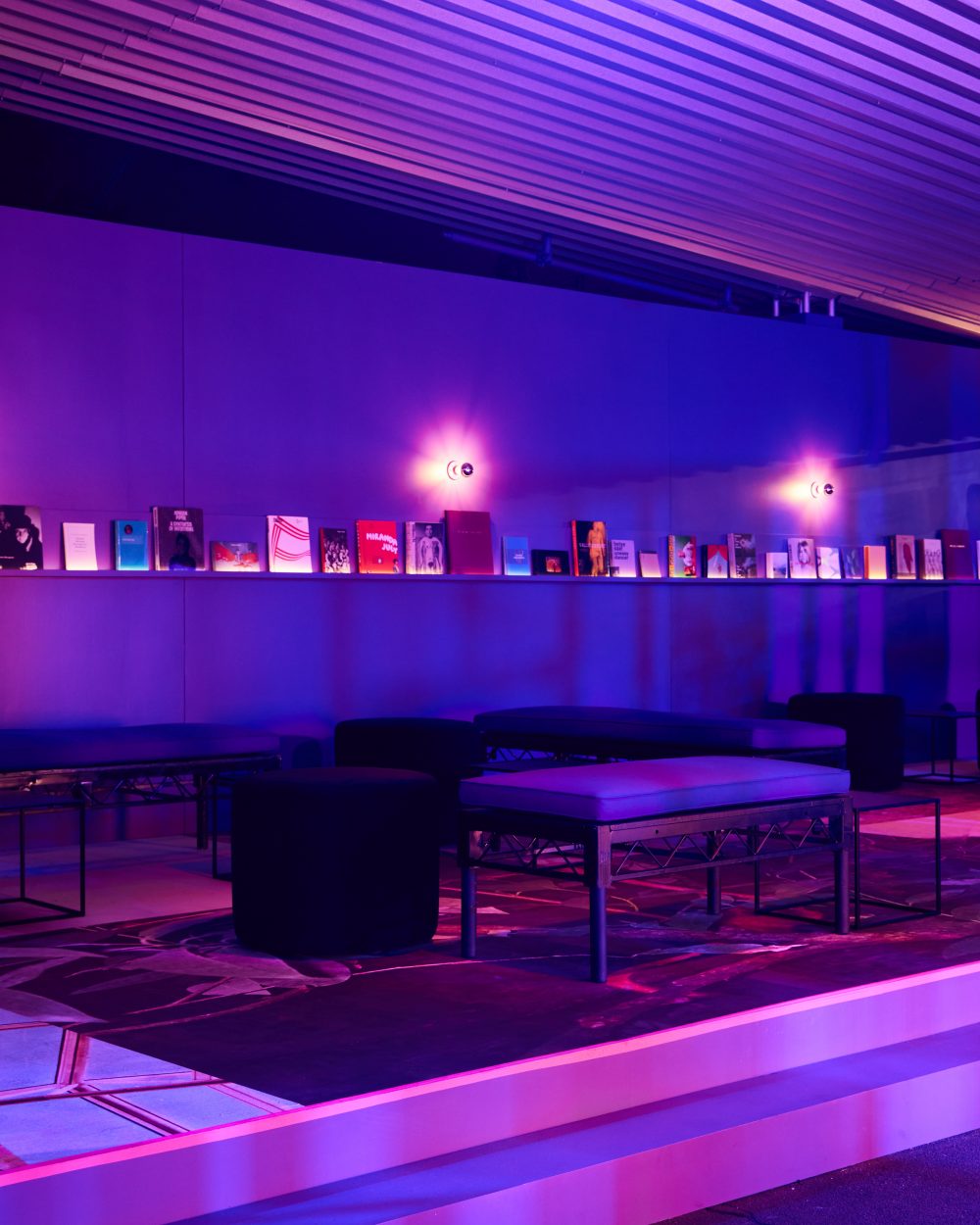 Starting at 10 p.m., a live musical performance by Junglepussy and DJ sets by Acyde, Bianca Lexis, Bae Bae, Damar Davis picked up the beat. The space was bombarded by the under-30 crowd, turning into a full-on buzzy nightclub. They sported all manner of Prada chic: fuzzy handbags, wide skirts with illustrations, ($1500) paillette bucket hats, faux fur trimmed coats, spring 2022’s ubiquitous flared pants and platforms, even old Prada classics like the iconic lipstick skirt, which I myself wore in the mid-90’s and wish to hell I could find now. One just didn’t know where to look first—or what to eat first. It was a luscious snack for the senses, with a champagne chaser.

Other fashion/art hybrid events around town included Britain based digital fashion e-tail site Matches Fashion doing its third collaboration with the fest: a gallery space as part of the fest with work by contemporary artists, and a Monday night (Feb. 15) cocktail party filled with edgy dressed guests at a private home in Truesdale. The Webster, the Miami based e-tail site with a store adjacent to the Beverly Center, held a cocktail opening for the VISO Project (apparel and objects designed by artisans) on Thurs. the 17th, featuring a pop-up of limited edition handcrafted mohair pieces. Dries Van Noten’s LaCienega fashion/art hybrid store regularly holds art events and openings in its adjacent Little House next door, but the show of British artist Raqib Shaw’s “Tales from an Urban Garden” was presented with major L.A. gallerist Jeffrey Deitch, making it all the more special, with an opening on 2/16. It will be up until March 26.

Another real art/fashion crowd crossover turned up at the annual Frieze reception hosted by film producer Sybil Robson Orr (of the Walmart/Walton family) and Matthew Orr on Wed. Feb 16, to honor Serpentine Galleries with its London CEO Bettina Korek, who of course was one of L.A.’s most high profile art world denizens before this international gig. Artist Alex Israel, fashion designers Peter Dundas and Scott Sternberg, shoe designer Nicholas Kirkwood, and local collectors like Colleen Bell, Liane Weintraub and Nicolas Berggruen – plus Owen Wilson (who turns out to be art collector) – feted Serpentine at their Bird streets home. Even the Hollywood agencies got in on the art action: Wednesday night (Feb. 16), UTA hosted a rooftop lunchtime reception at the West Hollywood Edition Hotel for the launch of artist Genevieve Gaignard’s limited print collection during L.A. art week.

The week’s notable glam drinks/dinners included Wednesday night’s celebration of Mortlach Scotch whiskey at Issima (with Anne Heche and KCRW’s Frances Anderton among a glamourous jet set crowd of artists, dealers and Scotch lovers). Neuehouse had its own mini Frieze, with varied cocktail parties and a dinner honoring artists Glenn Kaino and Tommie Smith, who collaborated on a project called Pass the Baton. It also welcomed a Hollywood crowd: John Legend and Kyle MacLachlan, among others, while its downtown offshoot at The Bradbury Building,

Frieze 2002 itself, with forty percent more space in its big BH tent than its former location on the Paramount lot, included myriad galleries the almost overwhelmed the eyes. The hot spots (no surprise) turned out to be boozy art lounges, including those by Ruinart Champagne (an official Friezes sponsor), the Avant-Garde Cognac Maison Bisquit & Dubuoche luxury lounge and a tequila lounge, where artists, major gallerists and art critics hung out. Opening night was crawling with celebs trying to look low key while they perused high profile art: Chris Rock with girlfriend Carmen Ejogo, Chloe Sevigny with baby, Leo DiCaprio in his ubiquitous non-anonymous baseball cap, Gwyneth Paltrow, The Weeknd, Kendall Jenner, Will Ferrell (at Gagosian) and Pierce Brosnan were looking for great art deals. And probably found them.

Art, of course, has always been fashionable, both historically and sometimes even whimsically. But that begs the question: is fashion art? Can fashion be art? Designers like Rei Kawakubo and Yohji Yamamoto are considered artists within fashion, but like art itself, that connection between the two is open to interpretation. Here are some interesting – and quite contradictory – opinions:
Karl Lagerfeld:   “Fashion is not an art form, it is a craft.”
Carolina Herrera: “The difference between fashion and art is that fashion is art in movement.”
Andy Warhol:   “Fashion is more art than art is,”
John Galliano:  ‘Fashion is above all an art of change.”
Oscar Wilde:   “One should either be a work of art or wear a work of art.”
Sonia Rykiel: “ It doesn’t matter one damn if fashion is art or not art.”
Michelle Obama:  “Paintings and poetry, music and fashion, design and dialogue, they all define who we are as a people.”
Miuccia Prada: “I’m always interested in the thing that is not clear.”

Go For the Gold Lips