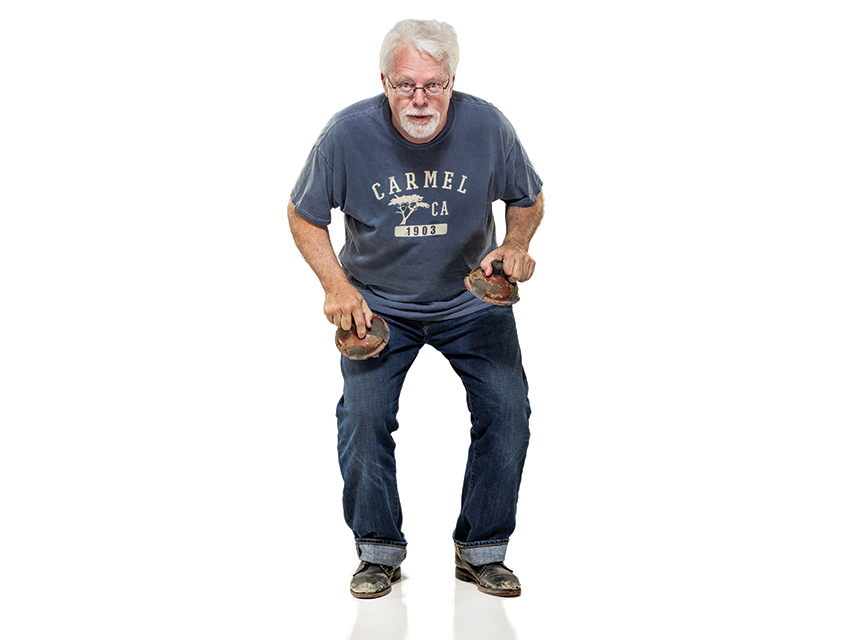 ➻ “The editor of Frozen was concerned with the sound of the snow. We used snow ice—like what you get in a snow cone—or cornstarch with cornflakes on it, depending on what was on the screen.”

➻ Jack Foley invented the postproduction process of adding sound effects to movies in 1929 for Show Boat. The work is usually done on a stage in front of a large screen on which a film is projected. As they watch, Foley artists use props (dirt pits, water tanks) to re-create background noises that were lost during shooting.

➻ The lead Foley artist at Warner Bros. Studios, Roesch fell into the craft 38 years ago when his landlord, award-winning Foley artist Joan Rowe, got him a job. He received the 2013 Motion Picture Sound Editors Career Achievement Award for his contributions to more than 400 films, including The Dark Knight Rises and The Hangover. His crew consists of his Foley partner, Alyson Moore, and their sound mixer, MaryJo Lang.

➻ Roesch works on 15 to 20 movies per year, plus TV shows, commercials, and video games. Smaller films take his team 6 to 8 days to complete; blockbusters, such as Interstellar, require upwards of 23.

➻ “Once every ten years a film like The Matrix comes along. What does a squiddie sound like? Or the device that pulls the tracking snail out of Neo’s tummy? We come up with that.”

➻ Onscreen noises are not what they seem: Roesch replicates bone breaks by snapping uncooked lasagna noodles; a metal spatula dragged along the shaft of a sword produces the schwing! when it’s unholstered; a vintage ice cube tray doubles as creaky train wheels.

➻ Roesch and Rowe used Jell-O and raw liver to create the squishy sound of E.T.’s movements in E.T.: The Extra-Terrestrial. “The liver would go bad, so Joan would have to pick up more every other day. The guy behind the counter eventually said, ‘What the hell are you doing?’ ”

➻ “Instead of looking at a horse and seeing its hooves, think plungers without the stick. That’s usually what we use.”

➻ By Roesch’s estimate, there are only 400 Foley professionals in the world. Foley hopefuls must pursue apprenticeships with established artists.

➻ Sound editors can also access prerecorded noises in digital libraries. “People ask, ‘Aren’t you afraid your job is going to go away because of the digital domain?’ No matter how anybody cuts your footsteps, it will not be as good as what we do.”