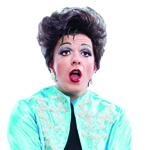 ➻ “The Wizard of Oz was a religious experience when I was little. When I was 12, I discovered Judy’s other recordings on a family vacation. I made my family listen to that cassette from New York City all the way to Lancaster, Pennsylvania. A fan was born. ” Mac, 34, is a Queens native who moved to L.A. in 2009. He’s performed approximately 600 gigs as the MGM actress since 2002. Five times a week he sings at Oil Can Harry’s in Studio City.

➻ “Back in New York I had to deal with lots of nasty, older female impersonators who didn’t want me around. I had to travel 3,000 miles to finally come into my own.” For his show Mac draws from the singer’s famous 1961 comeback at Carnegie Hall, belting out “The Man That Got Away,” “The Trolley Song,” and of course “Over the Rainbow.”

➻ “Early on I was billed as a drag queen. My wig designer and friends of mine have said I’m not a drag queen because drag tends to go over the top. Impersonation is supposed to be the sincerest form of flattery, not battery.”

➻ At five Mac started doing impressions for his family for 25 cents. Years later he wrote an autobiographical play called Judy and Me but became frustrated when the actress he hired couldn’t capture Garland’s warmth and humor. A friend urged him to take on the diva’s role himself.

➻ “Judy’s” closet consists of 20 replica costumes, 15 pairs of heels, 13 wigs, countless pairs of false eyelashes, and a Macy’s bodysuit. It takes 45 minutes for Mac, who is five feet seven, to transform into the four-foot-eleven headliner of A Star Is Born.

➻ Renowned Garland historian John Fricke introduced Mac to his partner, John Schaefer (who also emcees the show), at a Wizard of Oz breakfast screening. “Judy saved my life. I grew up in a very narrow-minded, homophobic suburb. After a day of being beaten up and having my eyeglasses broken, I would go down in my basement and listen to Judy’s albums. I would sing along with them and feel better about myself. I never viewed her as a tragic figure. I got this sense of joy.”