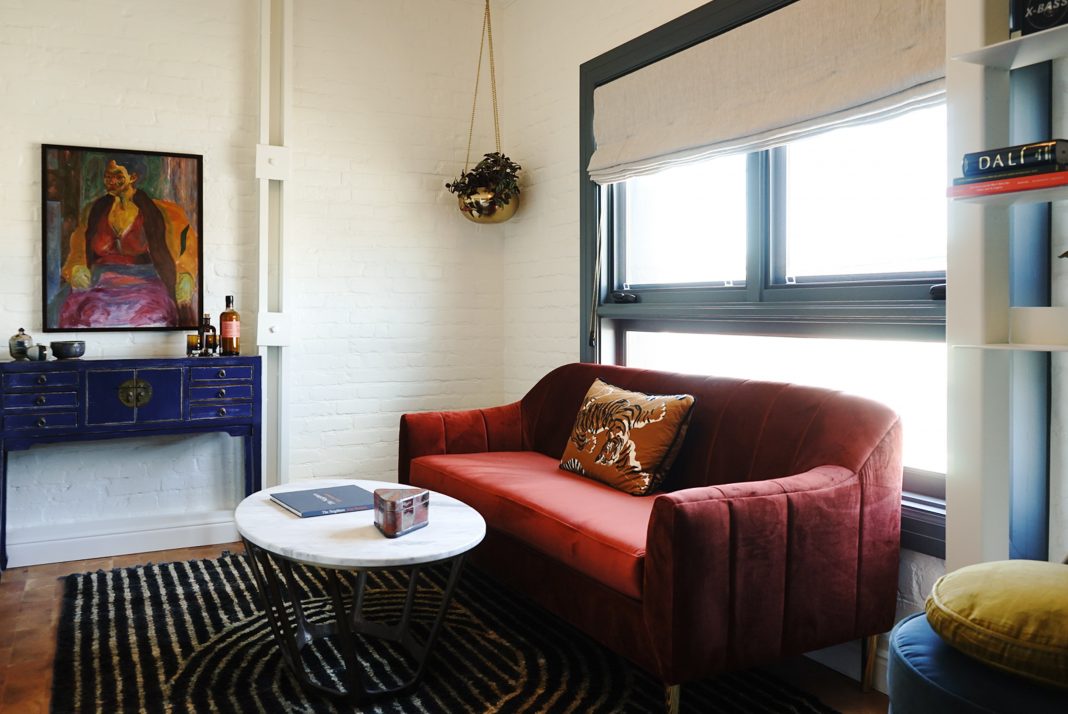 Nearly a century of L.A. history is tucked behind Gold-Diggers’ alluringly dingy Santa Monica Boulevard facade. The building started its life in the 1920s as a tavern and inn, catering to motorists traveling the new Route 66. As the years went on, the inn closed and the property was expanded to make space for a filming studio, which in turn became a rehearsal space for rock bands in the heyday of the Sunset Strip era. Along the way, the street-front bar evolved into a dive with exotic dancers working the stage.

The East Hollywood property caught the eye of Dave Neupert, a partner in L.A. nightlife concepts La Cita, Footsies, Melody Lounge, El Dorado, and Monty Bar. In addition to his local places, Neupert owns the Royal Street Inn and R Bar–a neighborhood bar with hotel rooms above–in New Orleans. With Gold-Diggers, he saw the potential to bring a version of that concept (he calls it “bed and beverage”) to Los Angeles.

To go along with the 11 boutique hotel rooms and the bar and live music venue space, Neupert brought in a team to retrofit the former rehearsal spaces into a high-tech modern recording studio. He envisions a band coming to stay in the hotel, work in the studio, and then play in the bar, without ever having to leave the property.”

Gold-Diggers bar was the first of the three components to open, and the stage has already seen concerts from Nick Waterhouse, Iceage, Luna, and other big-name bands. This month, the hotel begins accepting bookings, and the studio will come online later this fall.

We spoke with Neupert to learn more about how he went about restoring this historic building without losing the sense of character, and how his passion for music inspired every detail of the project.

Why did you decide to create this three-part business in the Gold-Diggers space?

It was the location and unique property itself that actually inspired the idea.

The Gold-Diggers property in East Hollywood was ideally situated to become another ‘Bed and Beverage’ because the pre-existing rooms on the second and third floors were already zoned as hotel rooms from the 1920s. The ground floor was already an operating bar that we acquired when we bought the property, so I naturally envisioned a kind of Californian little sister for the Royal Street Inn here in L.A.

The project really became special when we partnered with Dave and Ronna Trumfio, the veteran Kingsize Soundlabs studio team, to bring new life back to the 6,000 square foot bow truss building that was neatly tucked away behind the bar and hotel.

It’s an unparalleled opportunity to establish a creative campus where music artists and recording industry professionals can cross paths, share ideas, have a drink, sleep it off, and ultimately bring new music into the world. 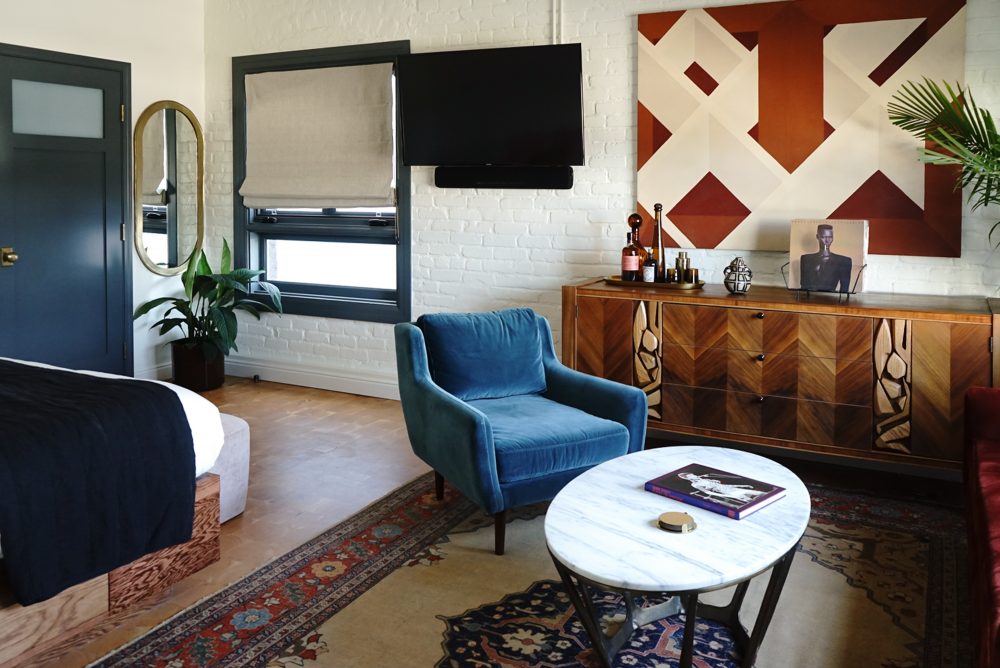 What have you learned about the history of the building?

The Greene Building was built in 1924 to house an inn above a tavern on the original Route 66, now Santa Monica Boulevard. When we bought the building the top two floors had been unoccupied for years. The Gold-Diggers bar on the ground floor had been a local bikini bar since the ’70s.

The building behind the hotel and bar was built in the ’40s, and first operated as a drama school, before becoming Ed Wood’s infamous sound stage, Quality Studios, in the 1950s.

Scenes from Plan 9 from Outer Space were filmed here. When we demolished the inside, we discovered Wood’s original catwalks under the dropped ceiling. Of course we had to preserve this hidden treasure; now you can see them overhead as one of the architectural details of the new studios.

After the Quality Studios era, the space evolved into the legendary band rehearsal space, Shamrock Studios, which was the stomping grounds for many famous punk and metal bands in their early days, notably Guns N’ Roses when they were Hollywood Rose.

What was your concept for the style you wanted to achieve in renovating this historic property?

We wanted to create a place to stay that feels like a refuge from the outside gritty city, but that is still a dynamic reflection of it. A. Savage of the band Parquet Courts, whom we commissioned to create 20 original paintings for the hotel, said he was inspired by the “film noir feeling” that he got when he walked the halls. Another partner we collaborated with described Gold-Diggers as having a formerly seedy, nostalgic vibe, now drenched in something deeply romantic. We loved that.

We definitely tried to soften the existing industrial edges of brick walls and steel retrofitting with lush fabrics and textures. There are chevron tiles, brass fixtures throughout, Douglas fir end-cut wood floor tiles, velvet, linen, wool, ceramic. We worked with the stellar architect team of David Wick and Andrew Lindley, along with Silver Lake-based designer Tiffany Howell of Night Palm.

Most importantly, music is the main “fabric” of our space. Each hotel room is equipped with the latest audio and video equipment–including Bluetooth-connected turntables so that you can play LPs from our large vinyl collection–and a choice assembly of art and music books. All that, plus the great views from the third floor rooms, come together to make it feel like your L.A. dream pad.

How did you go about curating the music for the in-room record collections?

My friend Justin Gage, the owner and founder of the Aquarium Drunkard music blog, came on board to be our campus music supervisor. I had always wanted to work with Justin on a project, so this was the perfect opportunity to engage his singular selector skills.

He described his process of curating the in-room music selections as aiming at both entertaining and promoting discovery, bending era and genre. Local artists also make an appearance, including Thee Oh Sees, Peaking Lights, Kevin Morby, and Ty Segall. That says it all. It’s an eclectic mix of tunes on vinyl, cassette, and via custom Gold-Diggers Mixcloud and Spotify playlists.

Can you tell us a bit about some of the collaborations with other L.A. brands that guests will see in the hotel?

I am a long-time entrepreneur, and I really think it is important to support other entrepreneurs who have passion for their craft, product, idea, or service. I can tell you from experience that L.A. is not the easiest city to operate a small business, so I’ll always do anything I can do to prop up other innovative local brands.

All of our mattresses are 2920 Sleep, based in Silver Lake. We’ve been elated to also collaborate with Sanae Barber of Sanae Intoxicants to create a custom scent for the hotel available as a room essence spray. My wife is in love with it. I think they’re still testing a shower scrub, too.

We’re huge fans of Monk Drinking Botanicals, found in every room’s mini fridge. Our coffee partner, La Colombe, roasts its coffee beans in Frogtown. Minibars are also stocked with local artisan munchies, which include my favorite chocolate bar, made just blocks away, in the kitchen of East Hollywood’s Friends and Family restaurant. Also, we are working with the Pleasure Chest, our neighbors just down Santa Monica Boulevard, to offer custom Pleasure Kits made just for Gold-Diggers guests as a bedside amenity in each room.

Who would be your dream band to have come stay, hang out, and record at Gold-Diggers?

The Original Meters. I love everything about New Orleans and the Meters uniquely represent the spirit of that special city. Seeing and hearing the second line rhythms of the New Orleans funk legends on our stage would certainly fit the definition of a dream come true.