A studio visit with Jessie Homer French is not for the faint of heart . . . or stomach. From the suburban sprawl of Palm Desert, it’s a ten-mile climb up the Roy Wilson Memorial Highway, whose hairpin switchbacks overlook mile-deep ravines. When you make it to the top of Pinyon Crest, punishing winds push flaxen dust devils in every direction, amplifying the otherworldliness of the place.

“You made it,” says Homer French, almost incredulous, as she greets me in the driveway. Her eyes are bright; her pewter hair, long and flowing. Her light and art-filled home has none of her in-demand, folk-inflected paintings on display; it is, however, chockablock with those of friends like Billy Al Bengston, Chuck Arnoldi, Laddie John Dill, Don Bachardy, Joe Goode, and the late Peter Alexander. In the past five years, after five-plus decades of toiling away as a self-described “regional narrative painter,” this consummate outsider has finally made it to the white-hot center of the international art world.

At 82, the New York-born artist was selected to participate in the 2022 Venice Biennale, where she’s showing seven paintings, one of an offshore oil rig engulfed in flames and another of wolves and deer roaming Chernobyl. Her humorous, delicately rendered paintings recall those of Grandma Moses, with the technical finesse of Jonas Wood, and the understated, if incisive, wit of her old pal Ed Ruscha. In other words, they’re the perfect antidote to a world on the brink of collapse. And on the heels of Venice, Homer French will have a solo show in July at VSF Dallas, followed by another this fall at Massimo de Carlo in Milan.

“My granddaughter is going to be in Venice in my place—I don’t really travel. If I were going to travel, it would be to fish,” says Homer French, who’s been obsessively fly-fishing since the 1970s. Until a few years ago, she’d spend 100 days a year between Canada’s Cowichan, Oregon’s Mckenzie River, or any tributary in the Sierras. She’s lived in all of these places, so wildlife and water are constant subjects of her paintings, which typically foreground nature over man’s folly, be it a stealth bomber flying over the desert or Noah’s Ark filled only with animals.

“I don’t like heavy-handed political stuff; I come at it sideways,” she says, as she relaxes on a fainting couch in her garage studio. “It’s insane,” she adds of the recent critical and market attention on her work (her solo booth with VSF at the 2020 Frieze New York fair sold out during the preview). She admits, “It doesn’t seem so important since Robin died last Labor Day.”

She’s referring to her husband of 52 years, Robin French, who worked as an agent for Marlon Brando, Elizabeth Taylor, Elton John, and Montgomery Clift, among other luminaries, before becoming the chief of production at Paramount. The couple met in 1969 when producer Ray Stark set the young agent up on a date with this 29-year-old model/artist who appeared in campaigns for Nina Blanchard and the first-ever Sports Illustrated swimsuit issue. “He almost married Carol Lynley three times before he met me,” jokes Homer French. A month after their first date, though, they were on their honeymoon at the Puerto Vallarta estate of Elizabeth Taylor and Richard Burton.

“We actually took our honeymoon before we got married because that’s the smart thing to do—you want to make sure it’s going to work out, to see if you can travel together,” she says. A month after the Mexican odyssey, they married at the L.A. County Courthouse on Valentine’s Day. “That night, we went to our manager’s business party. That was our wedding.”

They spent the next 30 years raising four children on an idyllic 2½-acre estate in Beverly Hills, where Jessie planted fields of wildflowers and Robin installed a decagon studio for his wife that later became the subject of many bucolic paintings. After they moved to Vancouver Island for a decade, the family home became a place of Hollywood lore: Drew Barrymore almost burned it down while living there with Tom Green, and the subterranean guesthouse Robin built became the pandemic studio of its current owner, Bill Maher.

“It was heaven,” she says of the time that marked the beginning of her professional career, which began in 1976 at Ankrum Gallery. While some Hollywood spouses might enjoy the spoils of their proximity to stardom, Homer French spent the past half-century making 1,200 multimedia works: she painted in the bedroom every day and made tapestries, rugs or quilts at night. Most of her paintings come from visions or wanderings: she started painting fires after witnessing a prescribed burn in Beverly Hills in the late ’70s, then sharpened that narrative on the heels of the Rodney King verdict with Prescription Burn, South Central. She began painting funerals after her first daughter, Valentina, passed away at age six of complications from cerebral palsy, and then went deep on her love of rural post offices from upstate New York to Pinyon Crest on the heels of the Trump administration subverting the USPS for votes.

“I can’t just sit around and do nothing,” says Homer French, who doesn’t use a computer or a cell phone.

Today, there are a handful of paintings in the studio waiting to be shipped to Dallas and Milan: a tender portrait of her childhood dog, Daisy Mae, during the summer she killed 23 woodchucks; rock-filled landscapes by their old home in La Quinta; scenes of a group of nun beekeepers from Redwoods Abbey harvesting honey in Whitethorn (“It’s really good, I bought a whole case”); and a half-painted work in progress featuring an Our Lady of Guadalupe statue on the hill above Robin’s gravesite.

Though Robin, French’s de facto manager for decades, might have urged her to put it out in the world, Jessie says, “That one should maybe stay in the family.

Here are some of French’s pieces: 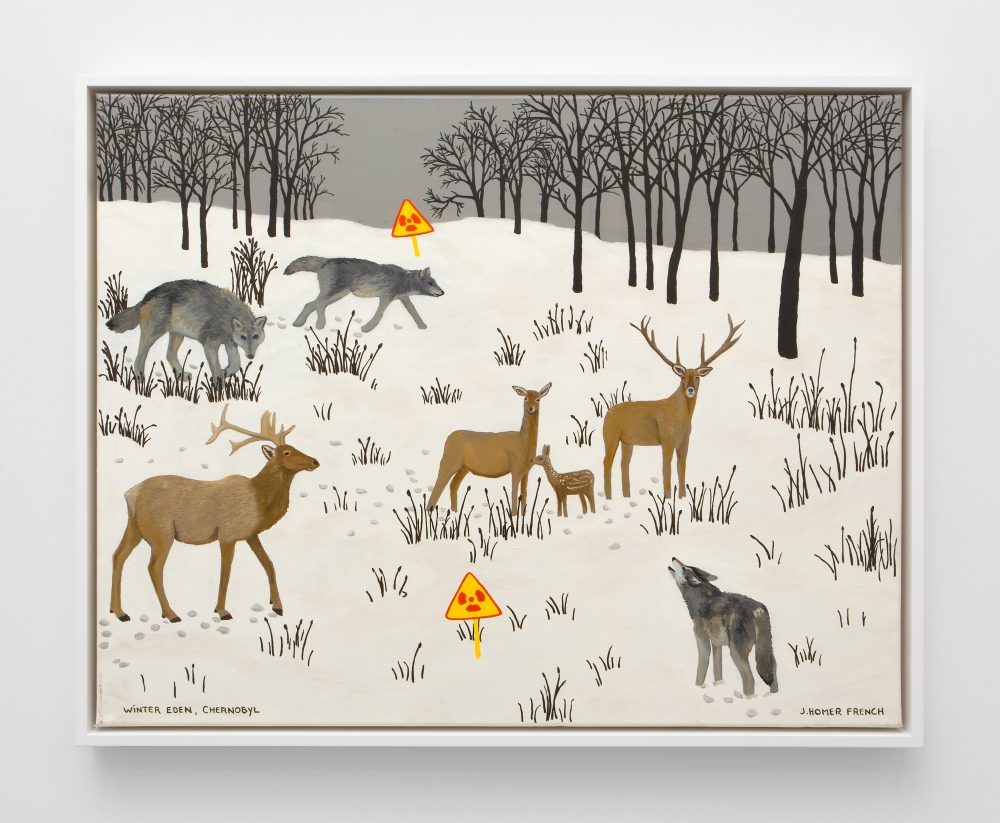 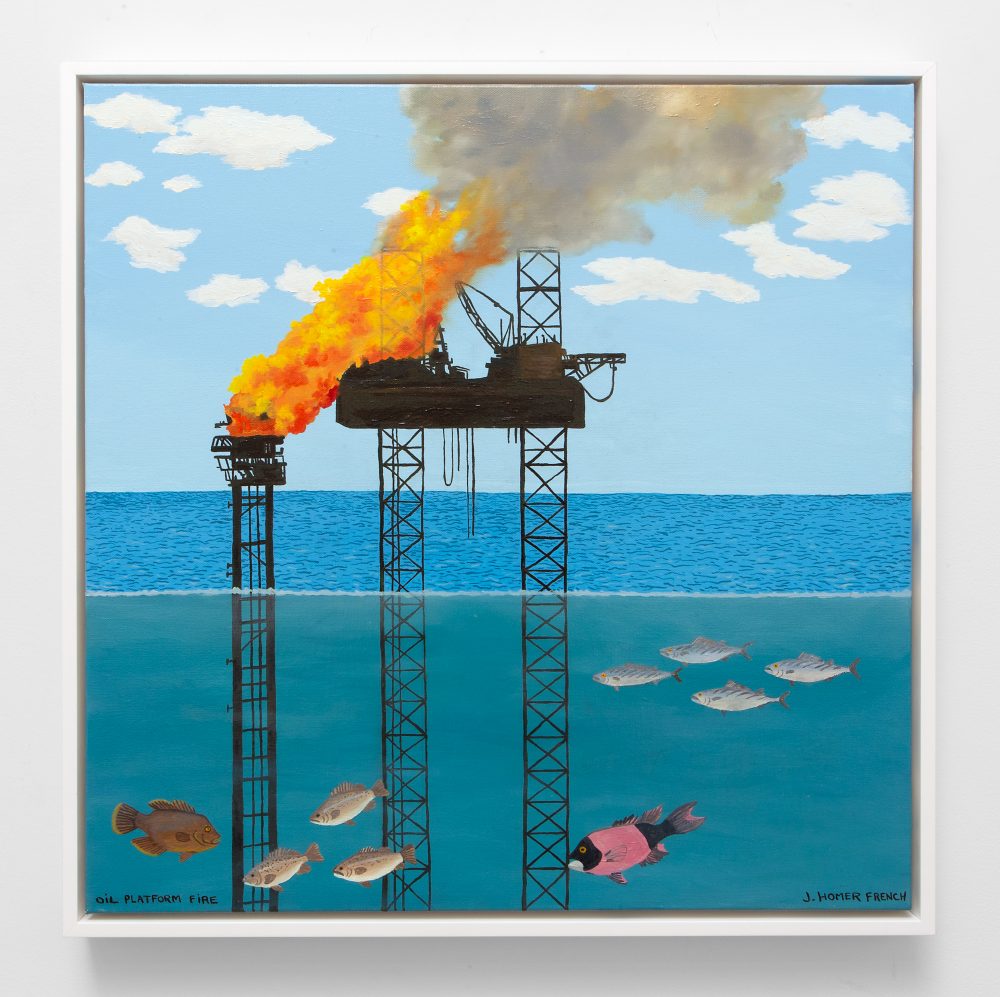 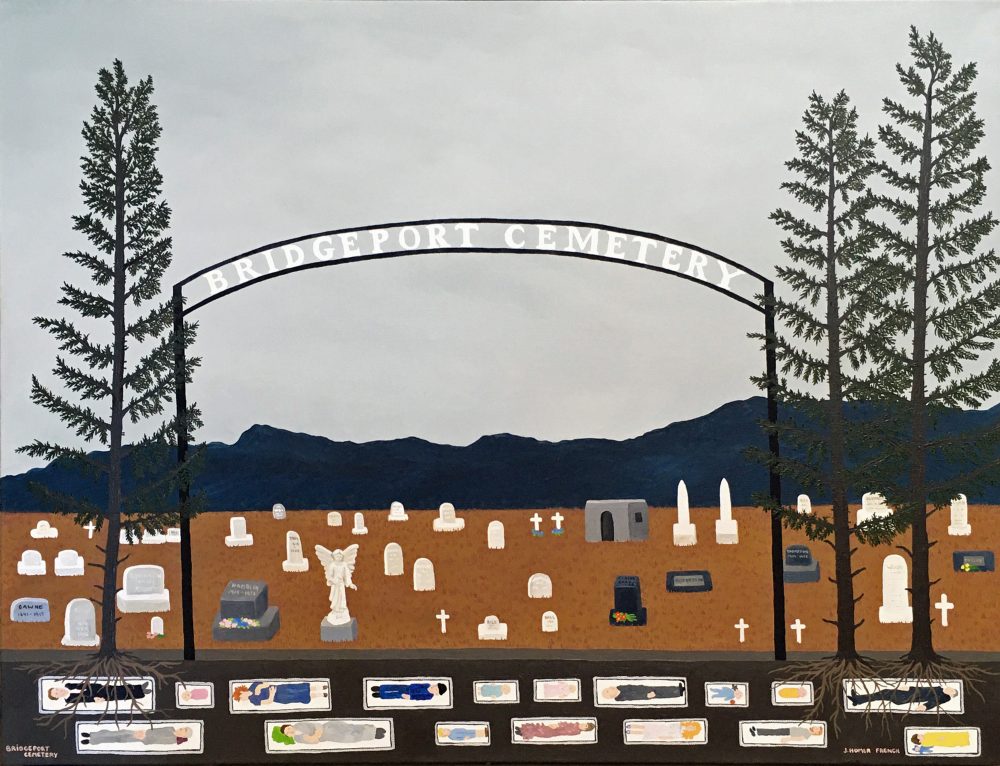 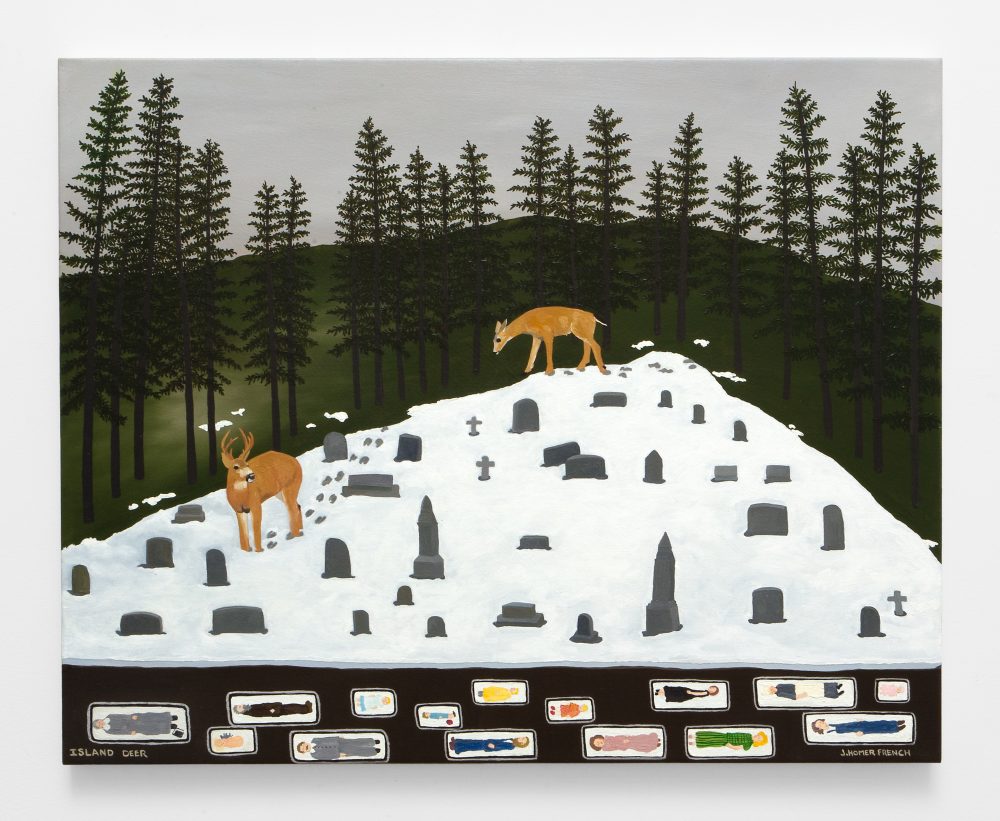