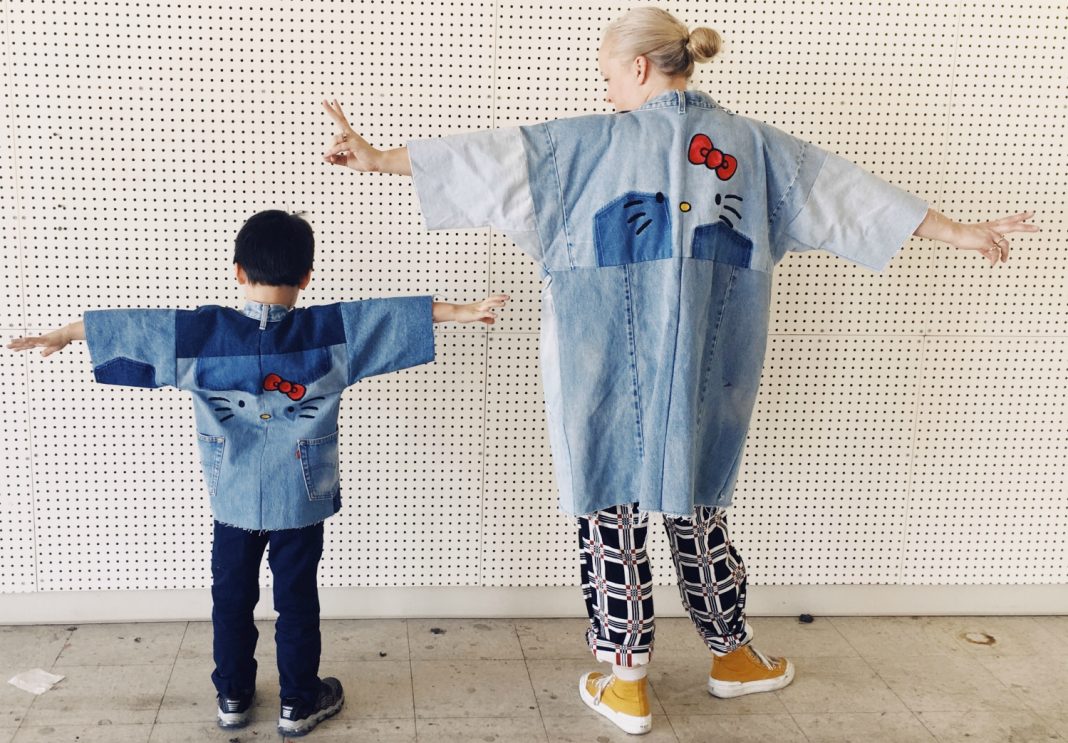 “If you’re trying to be zero waste—100 percent—it can be quite paralyzing,” says Erin Han while unfolding a tapestry inside Chinatown’s East/West Shop, which she and husband Dennys Han own. “So, if I look at a gradient of good, better, best in every scenario— what’s the best thing I can do? Is that an option?”

The tapestry, made of a vintage cotton gauze curtain, often hangs in the store and has been used for events like pop-ups and mending workshops. It shows the life cycle of an article of clothing, how it’s trucked to different points of production, shipped for consumption, and eventually driven to a spot where it’s disposed. “Good, better, best” scenarios are on Erin’s and Dennys’ minds when they’re building the store’s stock. That’s thinking about everything from the environmental impact of specific materials and travel between production steps, to the human toll that garment manufacturing takes. Air pollution, poor labor conditions, low wages, and overflowing landfills—how do you avoid these side effects of fashion when that’s your career? “I try to work in between the system,” says Erin. And she and Dennys are still learning.

Located on the first floor of foodie hub Far East Plaza, East/West Shop is where Erin and Dennys are forgoing a path towards sustainable fashion. They sell vintage and dead stock, as well as pieces that have been “remade” from previously existing garments. They have a limited-edition line of shoes made with leftover materials at a friend’s factory in China. There’s also a station where people can buy thread, needles, and patches (often decorated by local artists) to mend their own clothes.

Both Erin and Dennys spent years working in the fashion industry. Erin was at Obey Clothing, where she was the women’s design director. Dennys worked for several different companies as a shoe designer. Back in 2014, Erin went to China for work. It wasn’t her first visit to the country, but it was one that made a major impact on her. The air pollution was intense. “It was a sunny day, but you couldn’t see the sun,” she recalls, “it looked like a dirty fog.” Erin, who was getting over a respiratory infection at the time, took a short walk to get dinner and had difficulty breathing. “I actually left feeling really shitty about what I was doing, which was the first time I ever had that sort of a feeling,” she says.

Not long after returning home, Erin found a rag house in South Los Angeles and started to learn about the complicated afterlife of clothing donations while sifting through piles of castoffs. “I just started to get this sense that I can’t work in a business where I’m creating new things all the time and trying to teach people that they need new clothes all the time, that they need a new wardrobe four times a year,” she explains.

On the side, Erin sold vintage to her friends out of the garage of her and Dennys’ Highland Park home. Then, after spotting a vacant store front in Far East Plaza, they opened East/West Shop and she left her old job. That was three and a half years ago.

Part of their work is defying the perceptions of eco-friendly clothes. “We just wanted to be a really amazing store that people are excited to buy things, yet, they probably have no idea that it’s a really environmental conscious shirt that they’re wearing,” Dennys says.

Earlier this year, they collaborated with Sanrio, making items like Hello Kitty and Gudetama shirts out of overstock materials. Erin also taught sashiko, a Japanese method for patching clothes, at Sanrio’s Little Tokyo store. “If it gets the conversation started to people who might not even be thinking about it, then our mission is accomplished,” she says.

They frequently work with other Angelenos in their sustainable fashion mission. Erin combs through pounds of cast-off T-shirts at a rag house in Compton to find pieces that are salvageable. They hire a Chinatown alterations shop to rework vintage pieces into new styles. They also carry other local designers, like Tay Trong, who remakes vintage army jackets.

And they’re often thinking about what else can be done to reuse and recycle. They cut up their own rags, some of which Erin has made into rugs. When they print up T-shirts for someone, like they did for the restaurant Yarrow, Erin thinks about designs that might compel someone to buy the shirt secondhand as well. They reuse their sale tags, which note the processes used to make the clothes.

“We want to be a lot more real and honest with what we do,” says Dennys. “We can’t be 100 percent sustainable, but we can try to be at least 70 percent.”

RELATED: Murderinos Can Stay Sexy (and Not Get Murdered) in This Local Brand’s Clothes