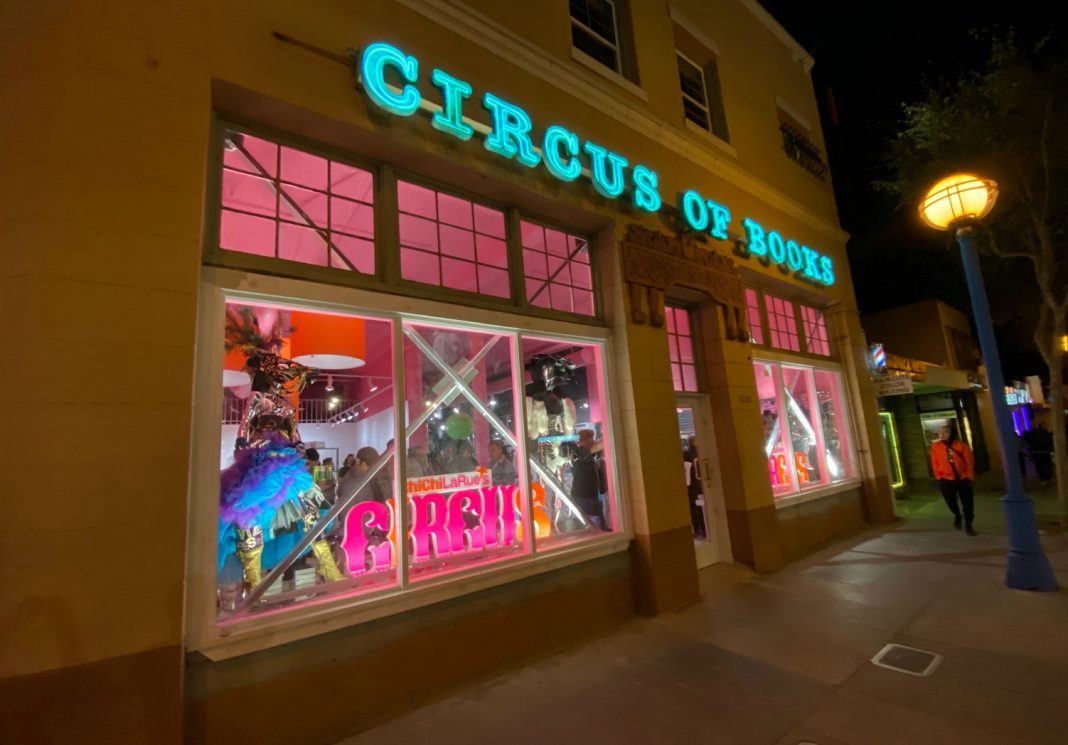 “They had no idea they were doing all of that, they did this on a fluke,” says Rob Novinger, walking me around the newly revamped Circus of Books space last week before it reopened on Saturday as Chi Chi LaRue’s Circus. Where the old Circus of Books was a dark and somewhat dingy cruising spot with most of the windows covered up—some by the drop ceilings—the new space is voluminous, abounding with glass tables stacked with gay art books, freshly painted carnation-pink walls, and tangerine Kandinsky chairs. The newly installed department-store-sized windows allow passersby to glimpse leather-clad mannequins—or a mirrored wall of lube (“Vaseline Alley”)—beside a bright white poppers bar, and a white-walled gallery with a curated selection of LGBTQ coffee table books and art by local LGBTQ artists.

“Adult stores used to be these old seedy, covered-up spaces because they were always living in fear of the law, being rejected by the community, and then getting kicked out,” adds Novinger. “Now everyone is out in the open.”

Novinger should know, he’s been doing this for the better part of two decades. Before he was making and distributing Rascal sex toys and running iconic adult film director Chi Chi LaRue’s flagship—an upscale adult store between Fiesta Cantina and Micky’s West Hollywood, featuring everything from poppers to licensed gear from the store’s namesake—Novinger was licensing sex toys and acquiring the largest gay-owned adult video library in the world.

“Now it’s free for everyone on the internet. Luckily we had been licensing toys to a big company in the Valley, and when that contract came up, I just started doing it myself in China,” he says with a laugh as workers rush around hanging ball gags from the racks in the toy section, which will also have a selection of shirts by Huntees.

Novinger isn’t just a tenant of the Masons, he’s a fan—but he’s also quick to note that his version of Circus will be a more curated affair. In addition to the Gallery at Circus, which will host quarterly exhibitions and open with a series of paint-smeared Polaroids by Jeremy Kost, Novinger will display art in a black-walled annex gallery (formerly a stock room brimming with unsellable DVDs and cheap cockrings) featuring the penis shaped ceramics pipes and erotic “C(r)OCKERY” of Frederick Vernon. In a nod to the OG Circus, Novinger will also carry new accessories and vintage zines from Tom of Finland, who used to do book signings in the store.

“So many people come in and they are so happy the store is coming back because it’s sort of the gay Stonewall of L.A., so I’m hoping we get the neighborhood traffic back. Our other store is a walk-in customer, this is a destination,” says Rob Novinger, who started talking to the Masons about taking over the space two years ago. But where Circus of Books attracted a more price-conscious shopper, Chi Chi’s will be a more luxe affair.

“The problem with the novelty business is that there is so much cheap crap out there that is not body safe at all. Our products are all medical grade silicon that is not meant to be thrown away that night. I truly believe there are two customers out there, this is just a higher end experience.”