Home Celebrity Chloe Sevigny Says Her New Perfume Is About Being a Lady, Not... 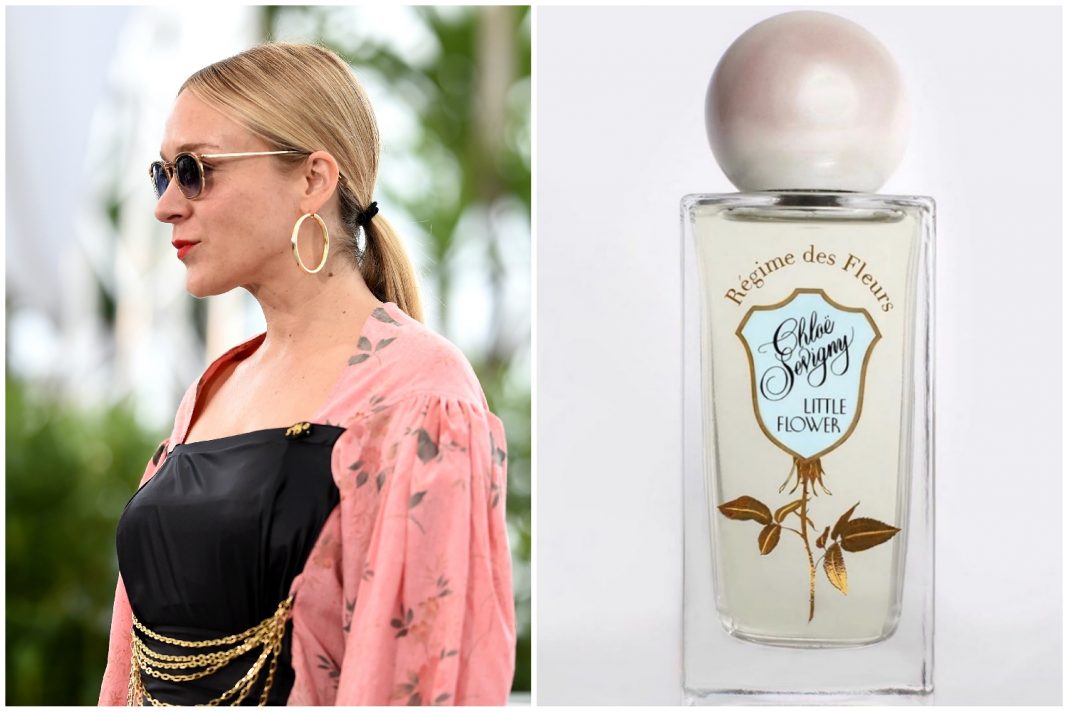 Roughly two decades ago, Chloe Sevigny successfully made the tricky transition from model to actor, but she never stopped being a designer darling. Now her old friends Alia Raza and Ezra Woods at fragrance brand Régime des Fleurs have created an eponymous scent for her—and with her—called Chloe Sevigny Little Flower, currently on sale online and at DTLA’s Dover Street Market. which debuted at both New York and DTLA’s Dover Street Market.

Both Raza and Woods have long working relationships with Sevigny, Woods styling her for the red carpet and Raza casting her in video artworks. In 2014 they founded Regime des Fleurs, inspired by their fixation with 18th century European court culture and Versailles.

“The scent’s partly a classic rose and partly a whole new take on the genre,” Raza says. “Like Chloe, it’s both traditional and rebellious. It’s like taking a shower in rosewater while burning 400 year old incense.”

“This product isn’t a celebrity perfume,” Woods adds. “It’s a niche perfume made in collaboration with an incredible artist. Olfactively, this perfume smells like nothing else. It’s a mold breaker like Chloe.”

Sevigny, a rose-fragrane aficionado, was involved at every turn: with the bottle design, the ad campaign by famed Dutch fashion photographers Inez and Vinoodh (who’ve done campaigns for Givenchy, Gucci, LV, and Balenciaga), and the actual “juice,” which took thirty three fragrant iterations over a year and a half.

Eventually they settled on notes of pomelo and blackcurrant bud, dry incense, and black tea, with a floral heart of lush Turkish rose. The name “Little Flower” is in reference to St. Therese of Lisieux, a 19th century French nun who died at age 24, after which she became the Catholic patron saint of flowers.

Sevigny’s fragrant Little Flower routine: seven sprays every morning, then refresh for an evening out. We spoke with Sevigny, who’s in the middle of shooting the HBO mini series We Are Who We Are in Italy, as she readied for Little Flower’s launch.

When did start to form your scent sensibility?

At a very young age. My mother wore Arpege—she would shower herself with it, under her fur coat and Hermes scarf. She also wore Rive Gauche, which was blue and very ’70s. The smell of those perfumes was for me the portal to a more glamorous life. And my aunt had a dressing table full of bottles. I started a collection and showed them in class.

I was obsessed with their design—the lady-ness of them. I’m embracing being a “lady” now. I still get this “it girl” thing—I find it somewhat irritating, but I let it go. I’m not a girl and I’m not that cool anymore. For me, Instagram is a way of making money and that’s it—it’s now factored into every contract

I hoodwinked Inez and V into doing our ads. They’re pretty radical. It’s not your average celebrity perfume. You can barely recognize me in them—they’re quite surrealist.

How did you first meet Ezra and Alia?

Ezra is a cousin of the artist Alex Israel. His grandfather was in the floral industry. I met Ezra when he was just out of high school and I was shooting Big Love. When he wanted to do celebrity styling, I said, “Why don’t you do me?” Alia, his partner, was making art films, and I performed in some of them. We’ve had an ongoing collaboration, so the scent was a natural for us.

How did they start Regimes des Fleurs?

Ezra is from a long line of florists. I helped them do this promotional record, I read this poem by St. Therese. A DJ did a remix, and it wound up in the Chanel couture show and Valentino. I hosted a party for them in New York when they released a candle. So when they said to me last year, “Let’s do a fragrance,” I said, hell yeah!

Rose is pretty much my thing; when I was a little girl I wore Tea Rose. I love roses; I will go to this specialty florist, buy one stem and have it forever. I wore Comme des Garcons rose for ten years.

Describe the process you went through for creating Little Flower.

We all sat down with the fragrances I wore over the years: Hermes, vetiver, neroli. We found some of the old ones on Ebay. We sampled like 50 different fragrances. I’d wear it around and see how people felt. We also did blind smell tests with my old favorites. Finally our deadline was looming—we could have kept going forever! Little Flower is the one we feel in love with so we tweaked it in the lab, added some tea scent. We had to get the color right; it’s like a very pale silvery yellow. The bottle is very substantial: square clear glass, with a crest they use. We turned that into a rose, gold and baby blue with black, a pink pearl top—so it’s both Hollywood and old timey.

Yes, I’m on my way back to Italy. Luca wrote it and is directing the eight-part miniseries for HBO. It’s about teenagers on Army base there—I’m a mother, but I’m an out mother. I’m a married to a woman and my wife’s played Alicia Braga. We did extensive military training together with an ex-green beret. We had to learn saluting right so we can be convincing. Luca (Call Me by Your Name, Suspiria) has got amazing taste; he’s truly chic.

Well, if you say so, it must be true! What else are you up to?

Trying to cram in two seasons of Fleabag!

Meet the Indie Perfumers Who Are Making Scents of L.A.

Frocking It: The Best Dressed Ladies of 2015