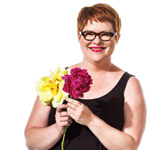 ➻“When people call my shop, they know they’re going to get individual service. They give us complicated feats, and we tackle them. If they’re going to spend that kind of money, they care what happens.”

➻Birkicht, 55, grew up in Cedar Rapids, Iowa, and moved to L.A. in her twenties. After designing window displays at Neiman Marcus and serving as art director at the Four Seasons in Beverly Hills, she opened the Velvet Garden on West 3rd Street in 1995 and became the go-to florist for lavish weddings and events.

➻“I happened to eye a florist who was working for Neiman Marcus and how wonderful his work was. I started to think that would be a good path for me, a transition into something more nature involved. Fashion can be a very shallow place to live. Natural products are so much more comforting to touch every day.”

➻Eighty percent of all flowers sold in the United States are imported, including most at the L.A. Flower Market, where Birkicht’s buyer shops at 4 a.m. on Wednesdays and Fridays. Birkicht also imports flowers directly from Holland, New Zealand, and Ecuador.

➻“I’m inspired by how many amazing places there are to go here, like the Huntington in San Marino, and by natural landscapes. I went to Lancaster one year and saw the California poppies naturally growing. It was just mountains and mountains of orange. It was incredible.”

➻“A lot of flowers get a bad rap. Baby’s breath, when it’s in clumps, looks beautiful.”

➻“The craziest thing I’ve made was for Richard Simmons—feathers and glitter.”

➻There are approximately 650 florists in the L.A. area. The average annual salary is $29,500, but high-end florists can make many times that amount.

➻“I never get any flowers because people think they’re not going to be up to my standards. But I would love any sort of gesture.”