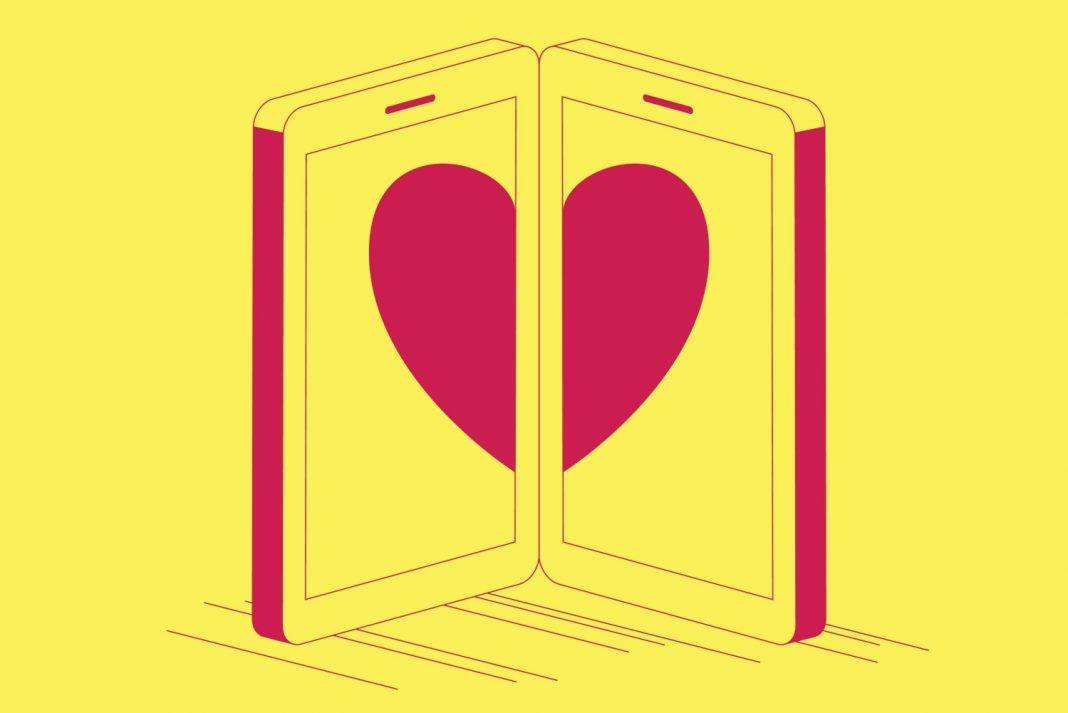 Erin Gallagher was swiping on Bumble when a picture of her longtime crush, Blink 182 drummer Travis Barker, popped up. It seemed too good to be true but she noticed the blue check verification next to his name, so it had to be him. Erin swiped right and, to her surprise, it was a match.

The countdown began. On Bumble, women have 24 hours to make the first move once two people both swipe yes to one another. With the clock ticking, Erin quickly thought of a clever introduction: “Why am I not surprised that you’re a Scorpio?”

Now the ball was in his court; he he didn’t respond within 24 hours, the match would disappear forever. Erin waited. And waited. Eight hours later she sent a follow-up message. In Erin’s mind, he had thousands of messages from thirsty women and she had to use her wit to stand out.

A part of her still assumed it was a fake profile so she went into online detective mode. She saw that he’d traveled from Calabasas to Beverly Hills, and began to cobble together a narrative—he must have gone from his home to the studio and back again. She assumed he was busy making music without a spare moment to reply to a potential paramour’s messages. As time began to slip away, she sent one final note. Then she checked his Instagram feed.

“I’m giving away festival and meet & greet passes through @bumble for our show on Saturday. If you’re in SoCal and want to hit up @backtothebeachfest (& meet me), download @bumble and find me.”

Erin had fallen for an expertly executed promotion. And she didn’t even win the passes.

From Bumble’s point of view this collaboration was a success. “Based off of the interaction on his Instagram post, many of his fans were excited for the opportunity to meet him,” A Bumble spokesperson says. “As a company, we love to engage our users in an authentic way that adds value to their Bumble experience.”

The spokesperson continued, “It wasn’t an in-app promotion. Travis shared that he was on Bumble [Date as well as Bumble Bizz] via his social media platforms, including Instagram.” However, did Bumble have a responsibility to notify users on the app that his primary goal at that time was neither dating nor business networking but rather promoting his show?

Tinder has taken heat in the past for promotions using celebrities (in full disclosure, I’m a dating coach who collaborates on content with the Match Group, Tinder’s parent company.) In 2014, The Mindy Project made headlines for presenting Tinder profiles of characters from the show, which was made even more confusing by the fact that Mindy Kaling’s character was also named Mindy. In 2013 there was even an ad for the TV series Suits that gave you a chance to match with Meghan Markle as Rachel Zane from the show. Yet in both of those cases, as soon as you matched you received tune-in information that put the butterflies in your stomach at bay.

If Bumble isn’t to blame for giving thousands of Travis Barker fans a 24-hour panic attack, is it ethical of a celeb to dangle a dating carrot in front of women on Bumble Date without the intention of actually dating?

I interviewed several women in Los Angeles who regularly match with celebrities, most of whom have never even gotten past the chat phase and some who’ve never received a single message back after a mutual match. An actress I spoke with who uses Raya, known as the dating app for celebrities, has spent over a year on the app making hundreds of matches without a single date taking place. “It’s an ego-boosting tool,” she told me, indicating that many people are there just to see and be seen. Yet in terms of collaborations like Barker and Bumble’s, she believes “it should be clear that it’s a paid promotion.”

Whether driven by the brands, dating apps, or celebrities themselves, it’s clear that the line between love and promotion has already been blurred. The best advice that I can give as a dating coach is to proceed with caution. Love at first swipe is risky – especially with a celebrity. At least let them buy you a drink first.

Damona Hoffman is the host of The Dates & Mates Podcast and an L.A.-based Dating Coach.

RELATED: In L.A. Is the Grocery Store Actually a Good Place to Look for Love?