Home Fashion L.A. Is in the Throes of a High-Dollar Sneaker Craze 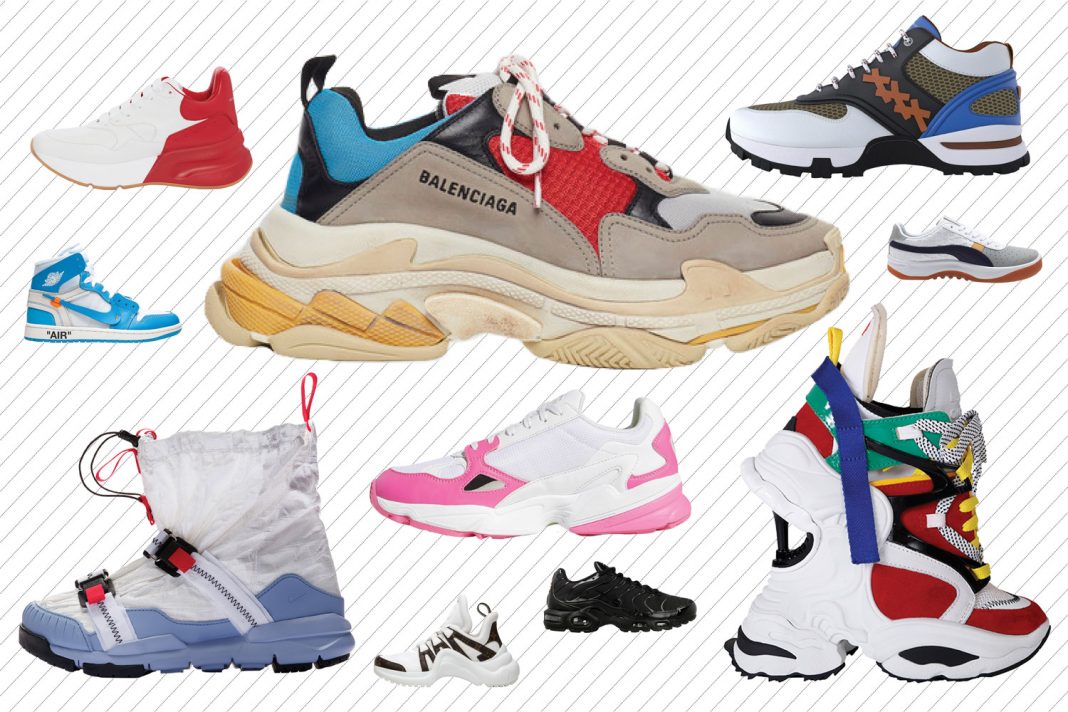 When the clunky “dad sneaker” first debuted on runways last year, underwhelmed fashion observers responded with a question: Who would wear them? The answer came amid a relentless onslaught of Instagram posts featuring L.A.’s top influencers—sisters Gigi and Bella Hadid, Hailey Bieber (née Baldwin)—all of whom were suddenly rocking the proudly ugly shoes (and raking in hefty fees for each post). They donned Louis Vuitton Archlights and Balenciaga Triple S, both clocking in at around $1,000 a pair, with everything from cocktail dresses to jeans and tees.

They almost had us (and store buyers) convinced, for a second, that these geriatric-soled kicks are cool. Last year the shoes saw a rise in sales of 627 percent in just three months, according to a study by retail analytics company Edited. Sales are expected to fall, however, as this year the dad sneaker was largely absent from collections, suggesting a merciful end to the trend. But its success has inspired a tsunami of designer and celebrity-branded sneakers, hawked by a diverse group of ballplayers, actors, and musicians.

First came the sport stars: Soon after the NBA loosened restrictions on players’ footwear during games last summer, courts became catwalks as b-ball heroes from LeBron James to Tristan Thompson showed off their self-styled footwear, priced at $150 off the shelf and running up to fully customized pairs worth thousands. This year we saw the arrival of the sneaker world’s biggest game-changer yet—the Nike Adapt BB. Billed as basketball gear, it’s equipped with state-of-the-art technology enabling the wearer to adjust the fit. It relies on an “advanced power-lacing system,” which continually sends input to an app on your smartphone. Laces may be a thing of the past, but charging shoes is in your future.

As sneakers became pricier than Prada’s patent leather pumps, they also began popping up on the red carpet, hugging the feet of A-list actors such as Timothée Chalamet and Charlie Plummer. But it’s not just winsome millennials that have jumped on the bandwagon, Jason Sudeikis, Robert Downey Jr., and Alan Cumming have been known to pair athletic shoes with tuxedos. And Adidas is currently in talks with Jonah Hill, a longtime advocate of the sneaker-and-tux look. He would be an unexpected choice for the brand, but companies are now aligning themselves with stars who can help them tap an ever-widening audience. So it’s not just Rihanna inking million-dollar deals with Puma, but you now have artists like Tom Sachs designing limited editions for Nike. The sneaker business juggernaut generates billions of dollars in revenue ($36.4 billion last year alone), with top dog Nike followed by Adidas and New Balance.

Los Angeles has long been a sneaker mecca. It’s home to the Shoe Surgeon, Dominic Ciambrone, whose bespoke footwear is coveted by collectors around the world, fetching, on average, about $3,500 a pair. His traveling reconstruction classes sell out well in advance.

And in terms of retail, for years stores along Fairfax and La Brea avenues have drawn blocklong crowds when sneaker lines are launched. But the recent emergence of “Sneaker Row” in downtown positions L.A. as the white-hot nexus of the footwear explosion. The small stretch of Broadway features some of the country’s most popular shops, including Jumpman L.A., Jordan Studio 23, Nike Kicks Lounge, and a soon-to-open Vans. The Fashion District’s Nice Kicks, Holy Grail, and Bodega prove DTLA is poised to become the city’s—and world’s—sneakerhead ground zero. Here are a few of this season’s standouts and the stars sporting them. 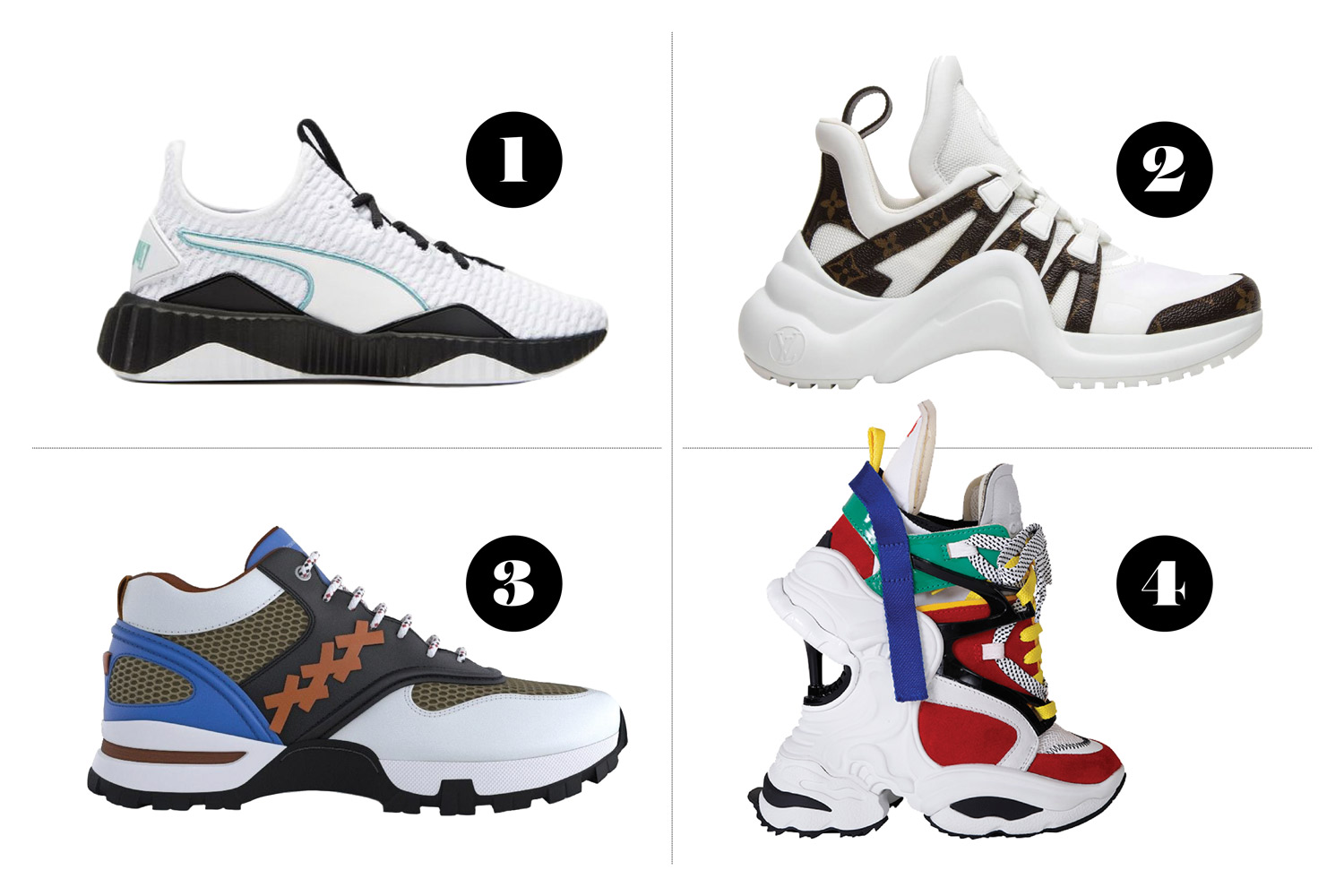 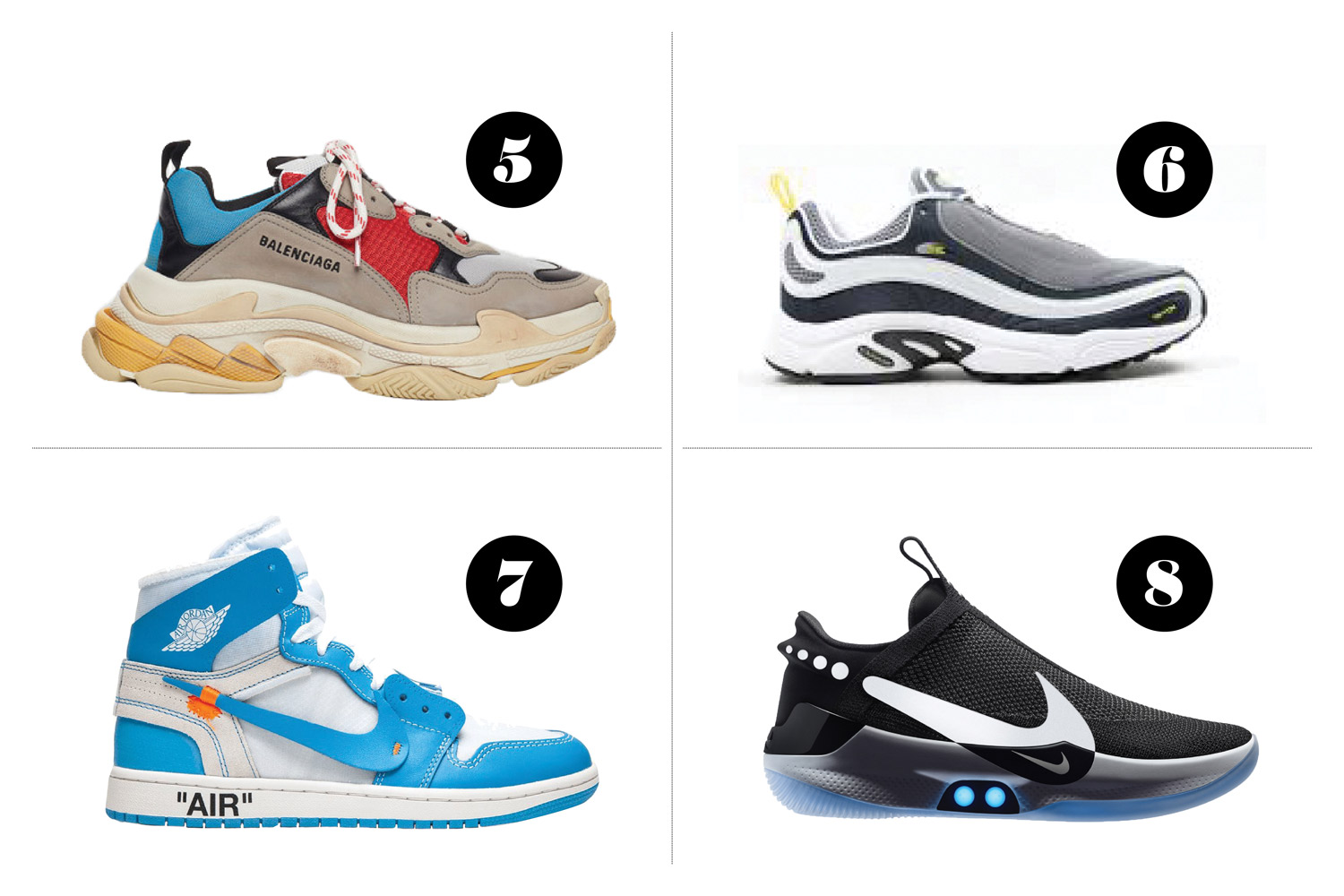 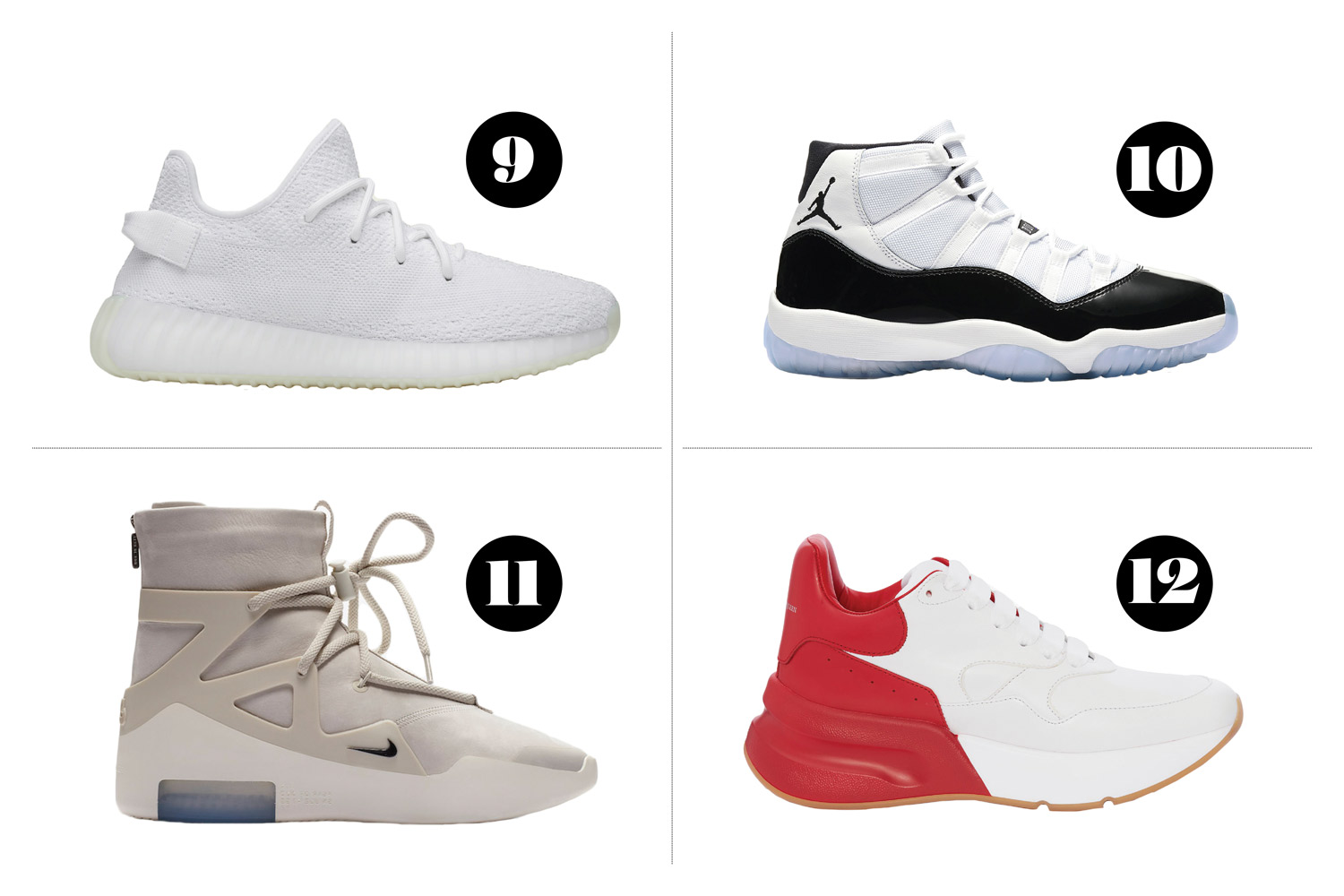 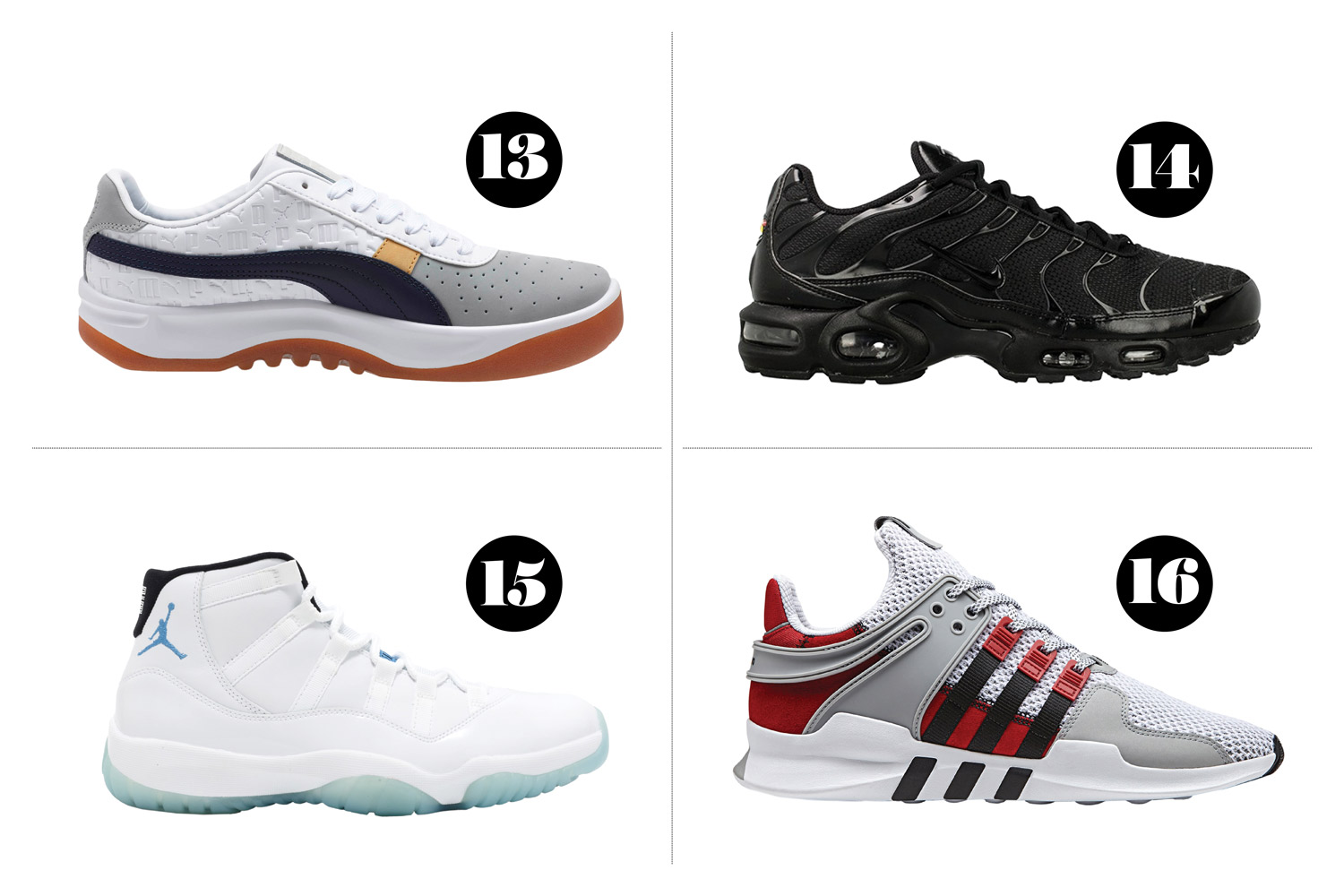 RELATED: Adidas Made Game of Thrones Sneakers to Wear While You Watch More of Your Favorite Characters Die