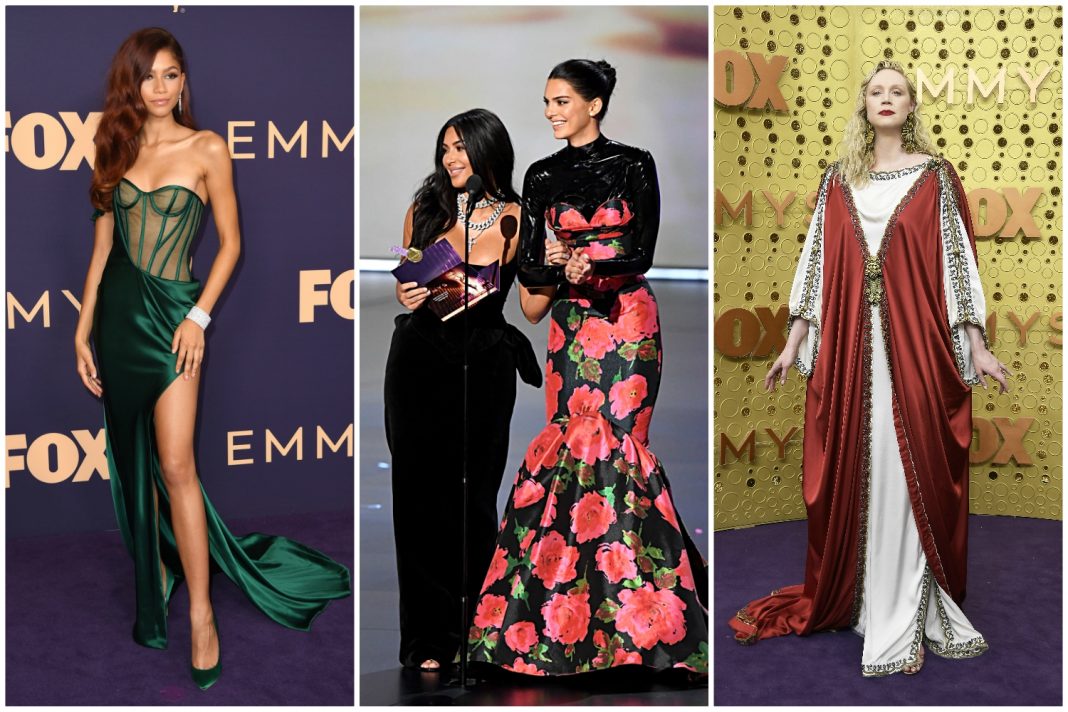 What gets the most attention?

That’s the thought running through the minds of the female Emmy nominees and presenters— and Billy Porter—as they choose their Emmy, Globes, and Oscars red carpet looks. And we’re talking “looks” as in the whole package—gowns, jewelry, shoes, hair, and makeup. They want to be the night’s top trendsetters, and to make the covers of the mags and the leads on digital carousels—or, hell, even land on worst-dressed lists. After all, nothing’s worse than being ignored on the night you’re most likely to draw eyeballs.

Best way to accomplish that? Go big or go home. Big skirts, big cleavage, big hair, big lips, big jewelry—the combo of which is most often impossibly tacky. But going underdone—small earrings, no necklace, sleek hair, natural makeup—can also grab the spotlight. It’s always interesting to discern, if you can, who made which choice…and why.

Because the best thing you can do on the red carpet: surprise.

We know which way Billy Porter went. The newest crowned queen of the red carpet eschewed a costume, a turban, a caftan—he went in the opposite direction. In a custom shimmery Michael Kors pinstripe suit—OK, the stripes where silver lamé and the pants stovepipe bells—he managed to be surprising by being subtle…for Billy Porter. And now we know one more of the many sides of Porter.

Going big and not going home: Angela Bassett, in some volumized red thing and giant hair; Kim Kardashian in a waaaayyy too long Vivian Westwood corset gown; Kendall Jenner in a waaayyy too long Richard Vinyl vinyl-sleeved floral gown (neither one of these ladies could walk sleekly to the mic); and Niecy Nash, showing lots of cleavage in a pink crystal Christian Siriano. Natasha Lyonne has a big enough personality—and big enough hair—to carry off her gold lamé Gucci pleated pussy bow gown—but it was still a lot to take in. When the dress comes before the star, fashion has triumphed over charisma. Not the desired result.

Not everyone who went subtle looked great: Kerry Washington wore a white blouse, black sequin bellbottoms, and a ponytail. Save that for the Grammys and those without fashion imagination. Girl, we know you’ve got that.

And not everyone who went oversized looked silly: Gwendoline Christie’s spectacular pale silk Gucci caftan looked like she might have borrowed it from Varys’ wardrobe—but that woman carried if off like it was something she threw on off the floor. Always the heroine, she managed to triumph over the most flamboyant dress of the night.

Interesting fact: Gwyneth Paltrow’s stylist Elizabeth Saltzman, an American fashion pro living in London, whose gotten many kudos for her unique fashion choices for Saoirse Ronan, dressed Sandra Oh, Jodie Comer, and Phoebe Waller-Bridge. She really was the big winner of the night.

Two Decades of Libertine, the Fashion Favorite of L.A.’s A-List