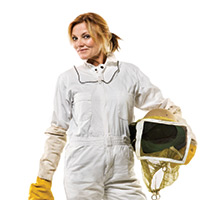 ➻ “People say I’m an expert, but I’m more of an advanced hobbyist. We don’t raise bees; the bees raise themselves.”

➻ McLaughlin, a 51-year-old actress and voice-over artist, started keeping honeybees in 2010 with her husband, Adam Novicki. The couple founded T&A Farms and sell their honey at a handful of L.A.-area farmers’ markets.

➻ Raising bees is not legal in some parts of L.A. County, but organizations such as Backwards Beekeepers, of which McLaughlin is a part, are pushing to make hive-minding as widely accepted as gardening.

➻ “We’ve rescued bees a few times. A family in Temple City called and said they had a swarm on a branch outside their house—it was the size of a basketball—but the bees were incredibly docile. We cut the branch, lowered it into a hive box, and shook them in.”

➻ “The cruelest thing is when the females kick out the drones after mating season. It’s like, ‘This isn’t a frat house. You don’t provide anything. You’re out.’ The drones die and get eaten by birds.”

➻ Beginning beekeepers need a cotton suit, a smoker, a hive box, and frames to collect the honey. After the initial cost of $400, bees don’t require much upkeep except enough space to accommodate an expanding hive.

➻ “Our hive boxes are like apartment complexes. We have three ‘floors,’ with ten ‘apartments’ inside each box. We only harvest honey from the third box—their surplus.”

➻ The smoker is a canister filled with burning pine needles (or other natural materials) whose smoldering masks the bees’ attack signals, which are communicated through pheromones.

➻ “One of the first times I opened the hive, I didn’t smoke them properly and they were flying at me. There was nowhere to go—I just got stung. That’s a mistake you only make once.”

➻ Bee populations are plummeting (a phenomenon called “colony collapse”), but their survival is crucial to our national food chain. In California the $4 billion almond industry depends on these insects for healthy crops.

➻ “L.A. is a great place to have bees. It’s honey season pretty much all year.”