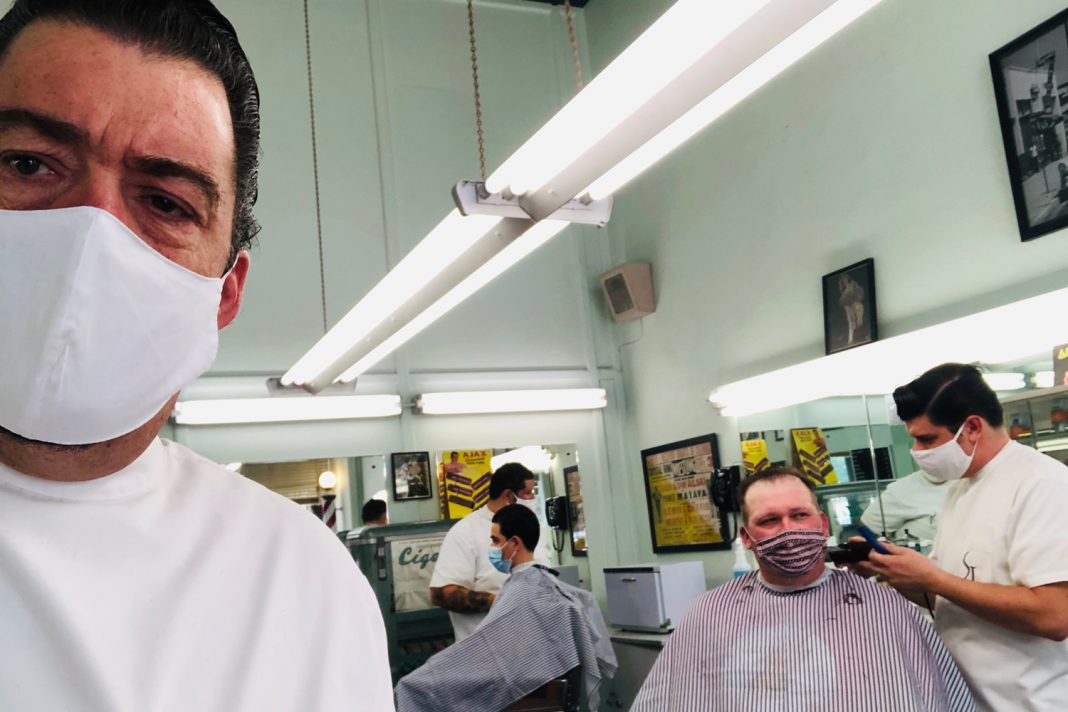 During the quarantine, every day is a bad hair day. Your locks get tangled and your sideburns grow wispy. You don’t recognize yourself when you pass a mirror, and wonder, “Who’s that Neanderthal?” But now that barbershops have reopened for haircuts, you can emerge from your cave a new man.

Time Machine
Enter a portal back to the golden age of Hollywood at Sweeney Todd’s, where a barber pole spins in the window and jazz plays in the background as you kick your feet up in one of the vintage barber chairs. There’s been a barber at this location since 1947, says owner Todd “Sween” Lahman. The shop has had to pause its famous three-hot-towel shave for now because masks must be worn at all times, but that hasn’t kept regulars from flocking back. In its first week, the shop was booked solid. “People want to get that mess off their heads,” says Sween. 4639 Hollywood Blvd., Los Feliz, sweeneytoddsbarbershopla.com.

Star Power
Beverly Hills’s Gornik & Drucker was established in 1989 after a merger between two competitive barbers: Harry Drucker, who founded his shop in 1936 and whose clients included fabulously coiffed stars like Ronald Reagan, Frank Sinatra, and Clark Gable; and William Gornik, who wooed Tony Curtis and Peter Lawford into his shop in the Beverly Wilshire Hotel. But in his old age, Drucker made peace with Gornik and asked him to combine the two businesses. Gornik & Drucker still follows its founders’ strict grooming standards, serving the “cultivated gentleman” at locations in the Beverly Hills Montage Hotel and at the Palisades Village mall. Beverly Hills Montage Hotel, 225 N. Cañon Dr., Beverly Hills; Palisades Village, 15275 Sunset Blvd., Pacific Palisades, gornikanddrucker.com.

Hipsters From Another Mister
For the hep cats of L.A., a pilgrimage to Blind Barber is a must. Launched in New York’s East Village, the shop opened its Culver City outpost in 2012. You can get that shaved-sides, long-on-top, vaguely Hitler-youth cut here, but you’ll have to wait a little longer for the secret speakeasy in the back to reopen. The bar is closed due to COVID; otherwise, you’d find a dance floor, a DJ, and mixologists pouring cocktails with edgy names like Impeach 45. 10797 Washington Blvd., Culver City, blindbarber.com.

Tequila Sunrise
Within walking distance to the beach, Paper Scissors Rock Salon in Venice offers snacks, beer, or a round of tequila when owner Deb Kennedy is feeling celebratory, which is often. Maybe it’s the sea breeze or just the circus vibe of the boardwalk, but it’s hard leaving here without a smile on your face. (It helps that there’s free parking.) Kennedy is a hard-working mom, and that Venice rent is expensive, so leave her a big tip. 1711 Pacific Ave., Venice, paperscissorsrocksalon.com.

Dudes Abide
With its hardwood floors and vintage Koken barber chairs, Baxter Finley oozes class. It offers a simple menu of cuts and a relaxed environment. You’ll find a large selection of its original shave creams, beard oils, and razors for purchase, all born out of the Baxter of California grooming line. Think of it as a spa for discerning bros. 525 La
Cienega Blvd., West Hollywood, baxterofcalifornia.com.

Fade In
As gentrification creeps into Inglewood on the heels of the new Rams stadium, pray we never lose local gems like In the Cut. Owner Trevor Graham runs the comfortable, no-frills, no-website barbershop. He’s been cutting hair here for 27 years, offering popular ’dos like the box fade, wave, and buzz cut. But the place is about more than haircuts. Graham says, “The model of the shop would be to uplift, encourage, and inspire the community through the art of barbering.” 220 E. Regent St., Inglewood, 310-671-9177.

Gentlemen’s Quarters
True to its name, The Barbershop Club in Koreatown has the feel of an old-fashioned men’s club, with aged wood furniture, the scent of Bay Rum aftershave wafting in the air, and even a tailor on staff. Located in the Hotel Normandie, the shop’s owner, Woody Lovell, learned his craft by watching his father and grandfather. “We were tossed into manhood through the barbershop,” he says. “You learned how to talk to a fellow man . . . how to shake his hand.” Handshakes are on hold, but the friendly barbers haven’t changed a bit. Hotel Normandie, 3610 W. 6th St., Koreatown, barbershopclub.com.

Happy Days Are Here Again
Downtown’s Bolt Barbers is a throwback to the 1950s. You’ll still be handed a chilled beer with your cut, but for now the vintage shuffleboard is off-limits. “It’s been a difficult year,” says owner Lynn Roberts. Some downtown barbershops have had to shutter permanently. A lot of clients have fled town. Then came the looting. Someone threw a brick through Bolt’s window, narrowly missing the jukebox. Another brick lodged in the glass. “I’m leaving that one,” says Roberts. “It says we survived.” 460 S. Spring St., downtown, boltbarbers.com.