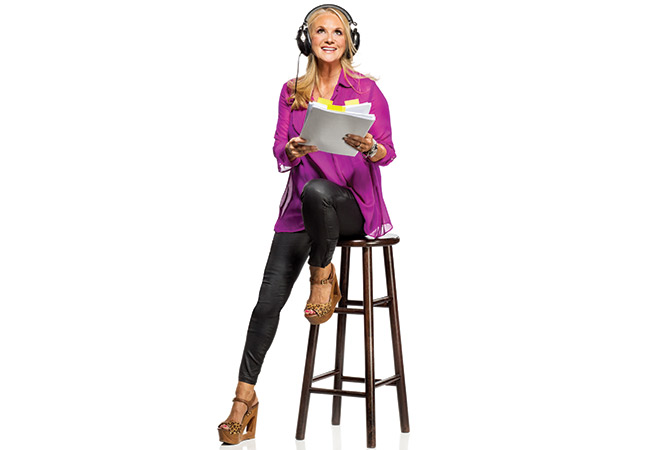 ➻ “Page one is the hardest part. After 300 audiobooks, I’m always terrified to sit down and read page one. I don’t know if I can do it.”

➻ Raudman, 51, moved to Los Angeles from Michigan in 1989 to pursue a career in acting. She spent 16 years as a successful voice-over artist for TV commercials, animated series, and video games before taking on work as an audiobook narrator. Her credits include books by best-selling romance novelist Nora Roberts, classics such as Anne of Green Gables, and the hit diet book Skinny Bitch.

➻ “In my twenties my recorded voice sounded tight and nasally. I learned that if I spoke from my diaphragm instead of my throat, there was more gravitas—allowing for control over the breath and relaxed throat muscles. I’ve never had an issue with losing my voice.”

➻ Raudman puts in eight hours a day, five days a week. A narrator is typically paid according to the total number of hours of the final recording ($200 to $300 per hour).

➻ “While recording, I keep my vocal cords healthy by drinking warm, clear liquids—nothing with sugar, though. Sugar creates mucus, which can turn into mouth noises.”

➻ The first audiobook was produced by happenstance. In 1952, Caedmon Records’ Peter Bartók recorded Dylan Thomas reciting his poetry. It filled only one side, so Thomas narrated his story A Child’s Christmas in Wales on the other. Audiobooks are now a $1.6 billion industry. This year’s best-selling audiobook is John Green’s The Fault in Our Stars, according to Audible.com.

➻ “Before recording, I read the book through once except for the final chapter. I hire a person to prep: make notes, code the script, and create character pages. I do know how the story ends; I just haven’t read through the final words.”

➻ Raudman has been nominated for several Audies, the Academy Awards of the industry. She was once up against Johnny Depp, who won for his reading of Keith Richards’s Life in 2011.

➻ “I record in a dark room—my sound engineer and I don’t see each other. When I come out of my closet after a love scene, it can be awkward.”

➻ “Narrating an audiobook is like running a marathon. I have to read it through and play all of the characters. There’s nothing unsexier than me in the studio.”