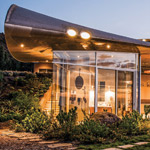 Imagine that a silvery bird of prey with a 125-foot wingspan has come to rest on a Santa Monica Mountains ridge. Home owner Francie Rehwald loves the comparison. “My totem is the red-tailed hawk,” she says, and sure enough, one of the rust-colored raptors loops over the horizon as she talks. In 2008, Rehwald famously brought in by helicopter pieces of a chopped-up Boeing 747 she had purchased for $40,000 from Mark Thomson of Aviation Warehouse in the Mojave Desert. Thomson supplies scrapped aircraft for films and TV, but this was the first time a jetliner was becoming a residence. The design by architect David Hertz—Rehwald had asked for something “curvaceous” and eco-responsible—placed one wing atop the living area of the main house, while the tail stabilizer became the roof of a second-story master bedroom suite. Another wing covers the guest quarters and its sweeping terrace.

To decorate the houses and landscape the grounds, Rehwald traveled to Bali and returned with three shipping containers of textiles, statues, wood artifacts, stone basins, colored rocks, and other items. She also roamed the site looking for remnants from former owner Tony Duquette, the interior designer who never met a discard he didn’t like. Duquette’s original compound of 21 whimsical structures had burned in a 1993 wildfire. The driveway is still lined with surviving bits of metal and ceramics that he had turned into sculptures.

Rehwald, whose family established one of the state’s first Mercedes-Benz dealerships, rivals Duquette in the art of repurposing. Enclosing the 55-acre estate is a webbed fence with an elegant agave patina; it’s World War II runway material that’s held in place with pipes salvaged from a Bakersfield oilfield. She transforms found pieces of green glass in a cement mixer, placing the tumbled “rocks” in emerald rings around cactus. An entertainment center near the pool has counters and flooring of Syndecrete, Hertz’s patented lightweight concrete composed of recycled industrial materials. She still has plans to incorporate the fuselage into an art studio. When you’re a master of reuse, your work is never done. When Dave Hall and Donovan Fell were working for an industrial sign-age company, Fell hand-sanded and polished airplane propellers in his spare time. The pieces looked like luminous Brancusi sculptures, and he sold them for $1,500 each at the Rose Bowl Flea Market. Fell was happy with the extra cash; Hall saw an opportunity to make even more. In 2002, they debuted MotoArt, now a $4 million company in El Segundo that turns all manner of aircraft parts into polished satin or enamel-coated home and corporate furnishings: Gulfstream wing conference tables with glass tops, reception desks made from engine cowlings, ejection seat bar stools. “It’s the love of aviation,” says Hall of the furniture’s appeal. “It’s green, it’s recycled, it’s deco-looking.” And it’s cool. They popped one of their “Mile High” beds, made from two DC-9 rear stabilizers and a C-130 inner flap, atop a golf cart to win a Burning Man Award of Excellence. MotoArt pieces can be pricey—wing desks start at $8,000. More affordable are picture frames made from a plane window ($245) and lamps fashioned from pistons ($350). Corporate clients (AOL, Go Daddy, Microsoft, General Electric, and Boeing) are the core of the business. Fell oversees fabrication in a shop hung with a WWI Fokker. He still makes propeller sculptures. They go for as much as $15,000.
-Margot Dougherty Take a Seat, Any Seat
A Pan Am aficionado re-creates the airline’s first-class cabin—down to the napkins

Anthony Toth’s relationship with the 747 started when he was five and flying with his parents on a Pan Am jet. He gazed upon the sailboats drifting across a blue ocean—the airline’s signature decoration on the closet door—and was enraptured. He memorized the entire first-class cabin: the posh central serving station and plush velour seats in red and blue. Best of all was the upper deck, reached by a winding stairway. From that moment in 1971 his childhood was defined by aircraft—they were his only toys.

By the time Toth was a junior in college, he was working for United Airlines; he’s now managing director for its western division. Toth has flown just about every airline. But he never got over Pan Am, which filed for bankruptcy in 1991. He assembled a decommissioned 747 fuselage in his Redondo Beach garage and reconstituted its first-class cabin; the big score was when he acquired a trove of unused Pan Am items, from pillows to flatware, that were about to be discarded. What Toth couldn’t buy he replicated: the seat fabrics and wallpaper, the etched-glass partitions. He hankered to add the upper tier, but city officials wouldn’t let him build onto his garage. So this year he moved his assemblage to a City of Industry warehouse, attached the upper deck, and has plans to construct an airport gate. That way when he walks through the doors, he’s a kid again.
–Ann Herold