Home L.A. Home The Castle on the Hill 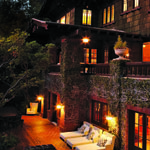 Rumor had it that the 1913 mansion atop the Hollywood Hills was long gone. It was an easy assumption to make about such a massive home—the largest Craftsman that’s still a residence, 13,290 square feet of high-maintenance woodwork. Leonard Fenton was secretly glad about that misconception.Twenty-five years ago, as the 27-year-old founder of a successful advertising and marketing agency, Fenton was hunting for a home of substance. A two-line newspaper ad for a property called Artemesia caught his eye; he could almost sense the seller had given up. When he walked through the door, he understood why, but Fenton wanted nothing more than to live there. “This was before Craftsman became popular,” Fenton says. “People would come and look at the house and think, ‘This is a multiyear project.’ I was young, and I didn’t set limits on what I could do.”

From outside, the eight-bedroom, seven-bath structure evokes a northern European hunting lodge, complete with chalet-style window boxes from which geraniums would spill. The interior, however, is a paean to the Arts and Crafts movement of late-19th-century England, when artists were responding to the Industrial Revolution by drawing from nature. The dark, ornately carved wood also exudes a Tudor opulence—certainly not the light touch of the American Craftsman houses. The home had stayed in a couple of families for much of its life, and they’d not had the cash to modernize and remodel it. As Fenton began his long, discreet refurbishment, he realized this pristine state was nothing short of a miracle—and that he would take some time before sharing it.Fenton assessed the building’s needs, most having to do with upkeep deferred, as he met with top restorers and experts on the period. He ached to bring back the colors of a Batchelder tile fireplace with a glorious wisteria decoration, which had been cleaned practically to oblivion. “Like with a lot of museum work, you’re scratching your head and trying to figure out what to do,” he says of the bedroom fixture. “We looked down low and found some remaining color. Then I hired a restoration architect who worked on it for six months with custom-mixed pigments.”

Frederick Engstrum was a rich man by the time he built Artemesia. He wanted a house that would celebrate his success, from immigrant stonemason to construction magnate (he built downtown’s magnificent Rosslyn Hotel, for one). He also chose to implement the latest in environmental and technical developments. A rainwater collection system supplied the bathroom showers; the resulting gray water was recycled in the garden. A tankless water heater fired only upon use, an early energy saver. He installed a fancy new electric intercom and central vacuuming system and then opted for one of the era’s great luxuries: a Murray Harris organ of record-setting size. In 2006, Fenton committed to a $250,000 re-creation of a redwood terrace that once spanned the arroyo at the front of the property. He could see it in the earliest photos. Construction was daunting; structural engineer Nels Roselund, who had consulted on the renovation of Pasadena City Hall and the Upton Sinclair home in Monrovia, accepted the job, but only on the condition that it be done in the manner of 100 years before.Fenton is now parting with the property, listed for $11.9 million as “art you can live in.” He sold his agency to Microsoft more than a decade ago and is using what he’s learned from Artemesia to acquire and revive other buildings of age. It suits him. “As a child, I loved uncovering old things,” he says, “like peeling the label off a fruit crate and finding something even older underneath.”

If Furniture’s Your Thing

Check out the Huntington for a range of Arts & Crafts pieces

Century Guild Chair
A departure from the Gothic revival sensibilities of Britain’s Arts and Crafts practitioners, the sinuous carving by Arthur Heygate Mackmurdo caused an uproar when it debuted in 1882.

Byrdcliffe Colony Cabinet
The 1904 chest was produced at the upstate New York enclave that exhorted furniture makers to return to the dignity of hand labor over machine-made goods.

Frank Lloyd Wright Chair
America’s foremost architect also made his own furniture, including an armchair that was showcased in the Oak Park, Illinois, house that he created in 1902 for Arthur Heurtley.

To find the British Arts and Crafts furniture at the Huntington Library, Art Collections, and Botanical Gardens, go to the Huntington Art Gallery; for the American pieces, the Virginia Scott Steele Galleries of American Art.

Fans of Arts and Crafts architecture know all about Pasadena’s Bungalow Heaven, roughly a square mile of homes from the golden age—1900 to 1925—of the movement. The landmark district throws open its doors to the well versed and uninitiated alike on April 28, when eight of the homes in the area bordered by Lake and Hill avenues and Washington and Orange Grove boulevards are singled out for the annual tour. While a Spanish or Tudor revival might be in the mix, the majority of the homes are Craftsman exemplars. Last year’s lineup included (below, from top) a traditional structure with cavernous front porch and a chalet-style variation. Docents are on hand at every turn so that you don’t miss the significance of a single hinge. Go to bungalowheaven.org.