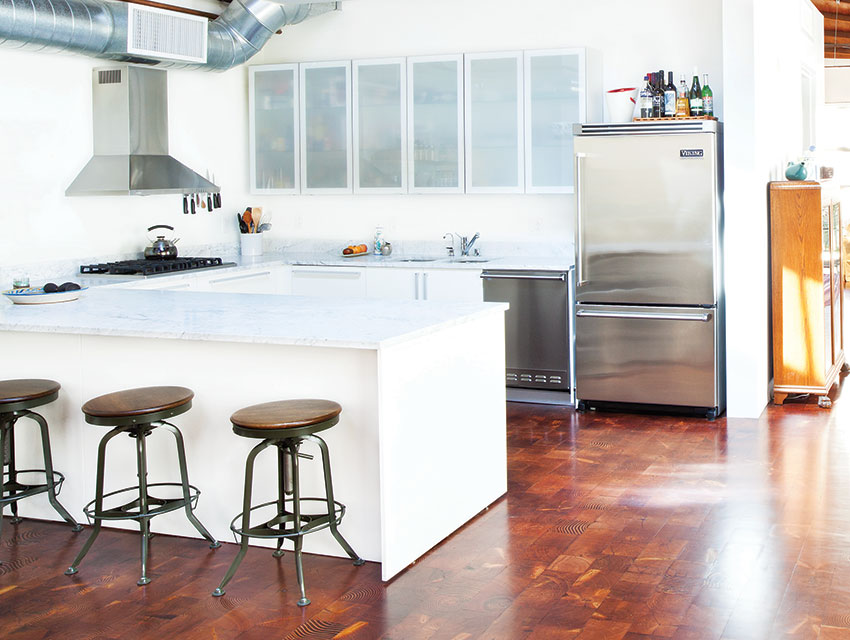 The dining table and chair came from Laurie Jacob's Westside Village home. The hallway cabinet and mirror and antiques she brought to L.A. from New York

Laurie Jacoby wanted to shake up her life, which had been rooted in the Westside Village house where she raised two children. She looked at condos but found them confining. Then she came upon the Prince-ton Lofts, a factory conversion in the historic Oxford Triangle in Venice, and felt a familiar frisson—of her early life in New York among that city’s yawning interiors. “There was an open, wonderful feeling, like a house but without the doors,” she says of her 1,800-square-foot space.

The 1960s building, a tilt-up construction, had been the factory for White Stag, the venerable outdoor and ski wear company that was a Portland institution until it was snapped up by the Warner Brothers textile firm. The apparel maker’s move to the Oxford Triangle, a small commercial hub fed by a Southern Pacific railroad spur, also put it next to the manufacturing center of the iconic Shelby Cobra cars. That detail enchanted principal developer Arnold Bernstein, who decided to preserve the vintage industrial connection as he transformed his 2003 purchase into lofts.

For Jacoby, a TV talent agent who works in Beverly Hills, the biggest challenge was deciding which furnishings to keep. In paring down her houseful of belongings, she ended up with a mix of pieces from New York, some L.A. acquisitions that blended seamlessly into her new space, and a couple of family heirlooms. Between the downsizing, which was liberating, and weekend excursions on her speed bike, “I feel like I’m on vacation all the time,” she says. A New York set designer made the canvas piece hanging behind the bed; the trunk is a family heirloom. Jacoby bought the Japanese bowls at a silent auction. The spinning top was made by her artist son. Jacoby stores her bike in the skylight-topped entryway of her Venice loft.

As industrial developers, Newport Beach residents Randy Kendrick and Gretchen Sauer were spending a lot of time in the heart of L.A., and hotels didn’t offer them the room to stretch out—or accommodate their three dogs. They invested instead in two lofts, one for themselves and the other for clients, and turned to interior designer Nadia Geller to make them homes away from home. Their own living space, on 2nd Street, is in a 1906 warehouse constructed by shipping magnates Adolph and John D. Spreckels to store sugar beets on their way from L.A. farms to Chicago processors. Inside, Geller created a generous kitchen: Kendrick is a gourmet cook who loves to host get-togethers for friends before and after USC events, which meant the adjoining entertainment area needed to have lots of comfortable seating. A sectional sofa and Eames chair from Design Within Reach are framed by the original 1906 brick wall in an open living area. The table was custom made, while the chairs come from Pottery Barn.

The second loft, on Hewitt Street, features a bedroom for overnight guests, along with a conference space and offices. The neighborhood was part of the Barker Brothers furniture empire that started in 1880 with a small structure in Los Angeles Plaza and grew into a web of factories and showrooms. In a nod to its other history as a rail center, Geller hired master woodworker Jesse Vint to repurpose wood ties for the sliding, barnlike doors off the entryway. Geller, whose downtown shop specializes in loft furnishings, says the owners remark on how the lofts “strike a balance between their urban selves and their sophisticated selves. Plus the raw materials remind them of the building process that they come from.” Turn-of-the-century millwork inspired the backdrop for the guest bedroom. All photographs by Tom Fowlks