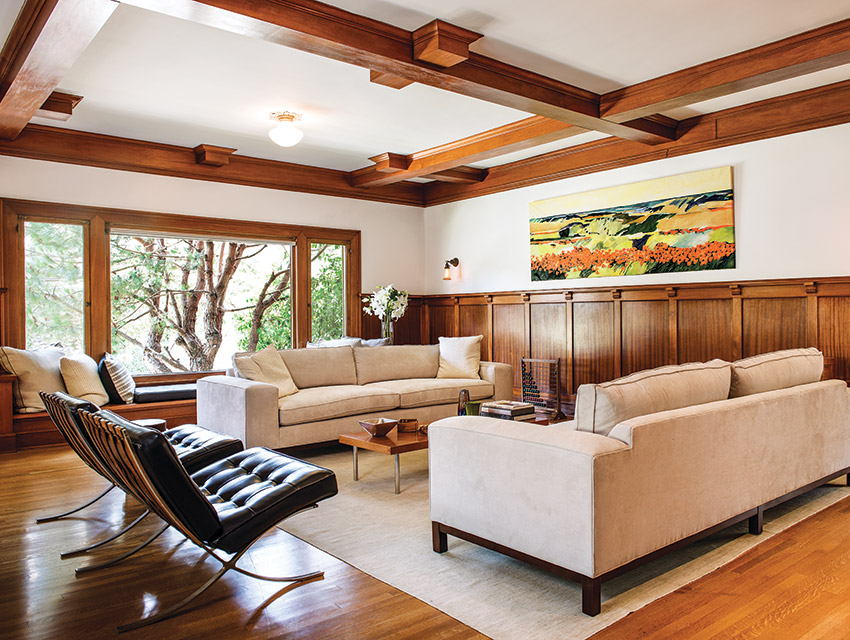 The 19th-century idea of neighborhoods designed as worlds apart—the sky-piercing Victorians of Angelino Heights, the royalty-worthy castles of Chester Place—appealed to George Crenshaw, who used his banking fortune to build the sort of enclaves he would live in. None was more swank than Lafayette Square in Mid City. The grand mansions there lined streets as broad as a yacht’s wake and had monikers just as splendid: Buckingham, Victoria, Wellington.

Attorney Kirsten Albrecht confesses she didn’t go east of the 405 much before driving up Crenshaw the first time in search of Lafayette Square. Like many Midwestern transplants, Albrecht, who specializes in transracial adoptions, and husband Marc Evans, president of production at Paramount, headed straight for the beach to settle in Venice. But the sight of Lafayette Square’s stately homes, lawns, and streets threw Albrecht back to her idyllic suburban Chicago childhood, while Evans appreciated the connection to the urban core. The couple bought a large Georgian, which happened to adjoin the 1913 mansion intended as the development’s model home. When the mansion went up for sale, they waited several months, then bought the 6,700-square-foot house in the summer of 2011. They were hooked by the third-floor “ballroom” that local lore contends was converted to a speakeasy during Prohibition. “It was the special part of the house,” says Albrecht of the spacious room with its stained-glass transom and three bell-shaped alcoves.

“I have fond memories of playing in my grandmother’s attic with thousands of toys that had been saved from when my mom and her siblings were little. It was a magical place, and I thought I could create that for my kids.” While the house has a deceptive stucco exterior and red-tile roof, the interior exemplifies the height of Craftsman workmanship: exquisite wood moldings, intricately carved built-ins, a Batchelder tile fireplace. Each bedroom has an attached sunroom so that Gideon, 6, and Harper, 3, have their own light-filled aeries. The bedroom suites, the playroom, the many neighborhood activities—a rented train at Halloween to take the wee ones trick-or-treating, a 50-foot snow sled run at Christmas—well, a kid couldn’t want for more.

A Neighborhood’s Brush With History

AMERICAN PIE
The dormered two-story at 1727 Buckingham was home base for the Cleavers in the Leave It to Beaver pilot, which set a new standard for Middle America.

IN REQUIEM
Robert F. Kennedy spent his last night at 1821 Victoria, the home of oil heir Charles McGinley, whose dad, Walter, had been Kennedy’s godfather.

GLOVES OFF
A 1930s heavyweight champion, boxer Joe Louis grew up poor in Detroit. But the pugilist enjoyed the comforts of wealth for a time at 1711 Wellington.

THE COLLECTOR
Long before he acquired an art museum, Norton Simon built a glamorous home at 1739 Buckingham, where he lived for 15 years with first wife Lucille Ellis.