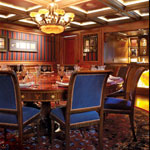 The low-slung facade is nothing special. For one thing, it gives no clue as to the enormity of the house, built into a Brentwood hillside, behind it. Frank Luntz gets a kick out of this. One minute his guests are politely admiring the tiny garden outside the front door, the next they’re wide-eyed as they enter gallery-size rooms decorated with museum-quality collectibles. Photos of Luntz with famous folks line the library; rub the head of the Winston Churchill statue and a bookcase swings open. The doorway leads to Luntz’s secret playground, in which beckons Ulysses S. Grant’s billiard table, a virtual golf game that plays the world’s best courses, a movie theater that morphs into a bowling alley, and a wall-length “newsstand” of magazines that span 20th-century history.

Despite the house’s incalculable size (Luntz says he has no idea of its square footage), it’s the memorabilia that’s the vote getter. As a boy in Connecticut, the political consultant, pollster, and Republican Party strategist could recite the presidents backward and forward by the time he was ten. They were his first idols, but he was quickly drawn to collecting pieces tied to sports and entertainment and any other high-profile inspirational figures “who did the right thing at great personal expense,” he says. “These are the guys who represented courage in times of crisis, and I wanted to be surrounded by them.” He cites Sandy Koufax sitting out the first game of the World Series because it was Yom Kippur, Bobby Kennedy visiting an inner city after Martin Luther King Jr.’s assassination, Albert Einstein protesting the proposed establishment of the state of Israel (Luntz owns the controversial letter). It explains his acquisition of the scribbled note from Abraham Lincoln asking General George McClellan why he won’t testify about the war’s progress, and of a missive from Ulysses S. Grant years later advocating the disbanding of troops so the South could save face. “You walk around this house and you see everything I think about, believe in, and appreciate,” Luntz says. “I’m amazed I ever leave town.”

That he has the house at all he ascribes to friend Michael Milken, who challenged the East Coast macher to purchase a place in L.A. The reward would be the honor of hosting the opening reception for Milken’s global conference. It would also add a third trove for Luntz’s treasures. His Virginia home is filled with music and film collectibles (including a letter from Orson Welles), and his New York City condo is dedicated to sports memorabilia, among them the baseball cards that finally got the reticent Willie Mays to open up to Luntz at an event and satisfy a burning curiosity: Who’s the meanest pitcher in baseball? (Answer: Bob Gibson.) Luntz bought the Brentwood house in 2009 and draped it with the artifacts of power a year later. In 2011, Milken made good on his promise, and the conferees gathered amid Luntz’s collection, a letter from Oliver Cromwell to his son holding pride of place in the living room.

Brentwood is where Luntz stages fund-raisers and political get-togethers, and where his colleagues and friends come to chill. They lounge on the terrace with the outdoor fireplace, shoot hoops on the basketball court, swim in the pool with the Bellagio-style fountains. His otherwise itinerant calling has proved a boon in his hunt for Americana. He scored a rare 1941 Life magazine with Göring and Goebbels on the cover in—of all places—a used-book store at the Milwaukee airport. The Lincoln letter was a stroke of luck at a shop in Pennsylvania as he was killing time before a speech. “Physically I look like someone who might be homeless,” says Luntz. “But the owner recognized me from Fox News. That’s when he brought out the letter. Otherwise he would never have shown it to me.”