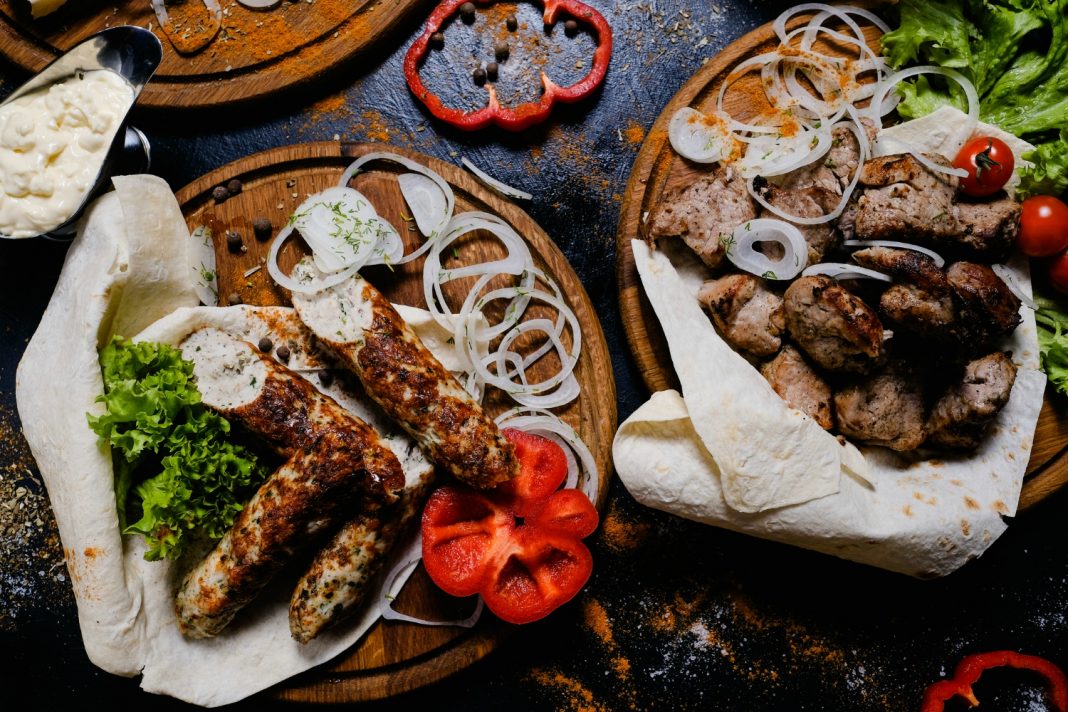 An Armenian meal in Los Angeles can make your head spin. At Araz in Studio City, lunch might begin with silky bowls of Middle East-conjuring hummus, progress to the yogurt cheese known as labneh, and  conclude with a buttery rendering of chicken Kiev so crisp and accomplished that it would have garnered a ribbon in Soviet times. But it’s not just the food that leads to confusion. The same garlic- and cumin-laden puree of roasted eggplant that is called baba ghanouj at Glendale’s Chicken Al-Wazir, a sparse white room with wood tables, is listed as mutabel down the street at Elena’s Greek Armenian Cuisine. Meat sliced off a rotating spit might be called shawarma or a gyro. Even flags, those unflinching symbols of national identity, get caught in the mix. The lady who tends the cash register at Falafel Arax, a Hollywood cubbyhole where falafel dough is scooped to order and dropped into baths of hot oil, is surrounded by three: Old Glory; the Lebanese tricolor, with its cedar at the center; and the red, blue, and russet emblem that represents the source of all this muddle, Armenia.

In a matter of decades L.A. has become one of the great cities to experience Armenian food. It’s a cuisine that is always vital, reliant on key contrasts, and, somewhat reassuringly, puzzling even to Armenians. Asked which kabob Armenians favor, the owner of Paros, a restaurant attached to Jons Marketplace in Hollywood, seems stumped. “It depends,” he answers, able to pause only momentarily because of the press of customers. “For Russian Armenians it’s pork, but for Lebanese Armenians it’s beef.” With a laugh he throws up his arms in a gesture of resignation that we can all understand.

A small landlocked country in a corner of the lower Caucasus, Armenia is among the world’s charter nations. To say it lies between Iran and Turkey is only to point to the far end of a long time line. You could as easily say that it lies between Persia and Byzantium. Its church predates Roman Catholicism. Resembling a jumble of plumbing, those scrawly letters you see on signs and awnings belong to a language so unalloyed, it occupies its own branch among the Indo-European tongues.

Because of Armenia’s desirable location as the hub that connects Europe, Asia Minor, and Russia, the country has seen more than its share of warfare over the centuries, though nothing parallels the genocide of 1915. And so its people have sought safety elsewhere, giving rise to a diaspora (spyurk in Armenian) that has reached places as diverse as Aleppo, Syria, and Geneva, Switzerland. Armenian exiles arrived in L.A. relatively late. “In the ’70s, Armenians came from Lebanon because of the civil war, in the ’80s, from Iran because of the fall of the shah, and in the ’90s, from the Soviet Union when it collapsed,” Glendale city councilman Ara Najarian tells me at Phoenicia Restaurant, where our lunch includes an intense muhammara, hand-pounded walnuts brightened with pomegranate juice and olive oil. Some Armenians settled in one-room Hollywood apartments, others in mansions on the slopes of the San Gabriel Mountains, but Glendale clearly experienced the largest influx. “For the Lebanese,” says Najarian, himself an Armenian American, “I think Glendale reminded them of Beirut.”

Each wave brought its version of Armenian food—the traditions they had maintained, the ingredients they had incorporated from adopted homelands, the dishes they had borrowed. Well, “borrowed” may be the wrong word. Rather, a kind of shading has occurred over many generations in which the Hellenic tang of lemon in a soup, the Persian custom of placing a shaker of sumac on the table, and the Mediterranean delight in fried fish have become markers along the route Armenian cuisine has followed. With its flatbreads, pickled vegetables, and skewered meats, Armenian cooking has never relinquished its nomadic heart. The bread was flat because it required little if any leavening and could be prepared quickly on a hot stone; the vegetables were pickled and the dairy products fermented to keep bad microbes from taking hold in the days before refrigeration; the meat was skewered so it could be roasted over embers.

More than an element, fire is the primary flavor of this cuisine, the maypole at the center of the dish. Unlike American grilling, kabob cooking shouldn’t add too much coloration. That’s why those skewers are so assiduously tended to, whether in tiny strip mall kitchens or in the open kitchens of big-ticket restaurants sheathed in river rock. Bite into something as simple as a lula kebab sandwich, and you see the logic of Armenian cooking. The grilling process imbues the ground beef with a flame-licked quality that stops short of char, allowing other flavors to lock in around it: Yogurt lends a rich tartness and baba ghanouj—or mutabel, if you are so inclined—a pert kick, each adding a layer of complexity.

When Zankou Chicken opened in a Hollywood strip mall in 1984, it established crisp chicken skin and creamy garlic sauce as an essential combination. This wasn’t a laborious French recipe involving 40 cloves but something you could eat on the run, or even better, in your car. Such gastronomy, delivered in a paper bag with plenty of napkins, always relies on one or two crucial steps. In the morning, when you ask for tahini bread at Sasoun Bakery, a neighborhood landmark across from an elementary school in the Hollywood flats, they toss the flaky pastry onto the oven’s stone deck for a few seconds to add crunch and to release the scent of sesame seeds. At Alcazar in Encino, sujuk, a spicy sausage, is exquisitely leveled out by the slow-cooked chickpeas of the hummus, with just a hint of olive oil peeking through. When the woman in a kitchen smock at Sahag’s Basturma Sandwich Shop on Sunset Boulevard spreads some labneh on the roll that she will transform into a basturma panini, the creamy fermented tinge amplifies the spice of the Armenian pastrami.

These are flavors from a borderless realm, a place that existed before the maps drawn up by empire makers. There is pan-Latin food and pan-Asian food served at restaurants that like to erase boundaries by mashing regional cuisines together; there’s no such thing as pan-Middle Eastern food because by its nature, it is already “pan” and has been for millennia. Which makes it an ideal food for a city like ours. Los Angeles allows any number of cultural rituals to be maintained even while happily incorporating them into the everyday. Would Zan-kou really be the same without the inevitable multi-culti queue of noshers at its various locations? (A Beck anthem doesn’t hurt, either.) Other times—say, lunch at Phoenicia when the tables are crowded with people squeezing lemon juice over the vermilion scales of mullet and drinking arak, an aniseed liqueur that acquires a characteristic cloudy hue when mixed with water—a distant world is being evoked. We could be in the good days of Beirut, when the casino was full and the seafront corniche glistened like diamonds.

In Journey to Armenia, the great Russian poet Osip Mandelstam writes about the “Armenians’ fullness with life, their rude tenderness, their noble inclination for hard work, their inexplicable aversion to anything metaphysical, and their splendid intimacy with the world of real things.” There is indeed a hard-won contentment, a sense of normalcy wrested from history, in the atmosphere of Armenian restaurants. But the communal story of uprooting, of departures, is ever present like a shadow. Virginia Petikyan and her husband, Onik, operate Elena’s Greek Armenian. Occasionally Virginia will linger over the oilcloth-covered tables of her busy establishment and peer into that past. “When we left Armenia in 1976, we had to catch the train to Moscow to then catch a train out. I was crying,” she says, fidgeting with the reading glasses that hang around her neck. “My father said, ‘Don’t—we are doing it for you.’??  ”

This is the pang that any immigrant community knows, and that need for a restaurant to create a toehold, to provide a foundation for a new life, is what prevents Armenian restaurants from breaking out of the “ethnic” genre. Part of this is due to the polarized roles that they play. With their tufted napkins and ornate glassware, some are pitched higher on the ceremonial scale than many of us feel comfortable eating at. Others, with their stacked Styrofoam containers, are doubling as a commissary. “We don’t order two kabobs,” jokes Glendale’s Najarian, “we order 40.” And eat them at home.

Despite the heartiness, Armenian food has a certain reticence. The pickled vegetables and little tub of garlic sauce tossed into a paper bag at the last moment are as far as restaurants go in asserting requirements. The glossy menus are functional more than enticing, content to shrink a swath of influences down to a few numbered dishes and time-tested combos. Though there are hearts and kidneys on the menu at Moon Mart Kabab, a shopfront in a quiet strip mall, the owner nudges non-Armenian customers to more familiar terrain with a curt “Have the chicken.” You can indeed have abdoug, a traditional summer soup of yogurt dotted with raisins and mint at Chicken Al-Wazir, but it’s not even on the kabob-packed menu; you have to know about it to ask. Maybe some traditions are more dear when left unspoken, or maybe the complexities seem too hard to explain. Sometimes it’s easier to just call yourself a Mediterranean grill and leave it at that.