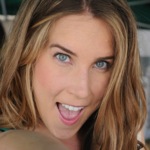 First up was Eater LA’s Kat Odell, then Josh Lurie of FoodGPS.com, but now we turn our sights to LAist‘s Krista Simmons.

Hidden talents or superpowers?
I do yoga and can bend like a pretzel. Seriously. Google “astavakrasana” and prepare to be totally freaked out.

How long have you lived in L.A.? (If non-native, where’d you live before?)
I’m a native Angeleno but have lived in other spots around the globe including Australia, Barcelona, Thailand, and good ol’ NorCal.

What path led you to what you’re doing now?
While studying in Santa Cruz, I became really active in food policy on campus. I did the whole hippie thing: living on an organic farm; fighting (and winning!) to get local produce in our dining halls, and writing my own food UC TV show. I also worked in the tasting room at Bonny Doon Vineyard, and being involved in the wine world helped elevate my palate.

After I graduated I decided I wanted to learn more about how food and wine were made, so I did a program called WWOOFing in Australia and Southeast Asia. That basically meant working as an immigrant laborer, doing everything from harvesting honey to tending cattle and cultivating grapes. Those travels inspired me to write and shoot more, and that’s what lead me to tell my stories trough journalism.

Plenty of writers cover multiple beats, or write in addition to holding down a “day job.” Is this your only squeeze or do you have other work-related things that also occupy your time?
Believe it or not, producing three posts a day at LAist is a part time gig, so I’ve gotta hustle to keep afloat. I’m also a culinary corespondent for KTLA and Young Hollywood, where I do celeb chef interviews and cover the intersection of food and entertainment. I wake up and do some New York hours for the TODAY Show’s food section online, and also write for some travel outlets. It’s exhausting just typing that out, but it’s worth it.

What about when you’re not eating and/or drinking? What are some of your hobbies or favorite activities?
I am really active and love being outdoors. I practice heated power yoga 3-4 times a week, run with my pup, and swim. Travel is also a huge passion of mine. I’m actually writing this on the plane to New Orleans. It’s my first visit, and I can’t wait to inhale some beignets at Cafe du Monde.

Favorite part of your job?
The incredible food community in L.A. There are so many inspiring chefs, bartenders, purveyors, and writers in this city. I feel really lucky to be a part of it.

Least favorite part of your job?
Trying to balance time in the field with time at the desk. I wish I could be two places at once.

How are you in the kitchen? Anything you’re particularly good (or bad) at making?
I can throw down in the kitchen, for sure. My favorite dishes to make are handmade pasta and anything braised. I also like making soups, hearty salads, and experimenting with new grains. Oh, and anything with kale. As a general rule, I love food that makes you feel good. It’s all about balance.

What are some of your favorite places to eat around town?
Carousel for Lebanese/Armenian, Bludso’s for killer ‘que, Bestia for excellent pastas and charcuterie, Toshi for a cheap but fresh sushi lunch, and Silver Lake Juice Bar for a post-workout pick-me-up.

How about places to drink? Cocktails, beer, wine, coffee, tea… pick your poison(s).
Anywhere where I can find good wine and good friends. I am super bummed City Sip closed because that was a staple. Covell is also up there.

Most of my go-to cocktail bars are overseen by Julian Cox (Picca, Sotto, Rivera, Bestia, et al), especially now that Matt isn’t at the Library Bar any longer. But he’s pulling shifts over at Cliff’s Edge once a week now, which works out nicely because I already love that place.

Any favorite markets?
For farmers’ markets, obviously the big three: SaMo Wednesdays and Saturdays and Hollywood Sundays. But I also go to the smaller Silver Lake market a lot. And Super King. That place is brutally overwhelming, but you can’t beat the prices.

What do you feel is the most exciting thing happening in the local food scene right now?
It’s thrilling to see the indie spirit thriving in our city. The fact that so many talented small producers can now turn their passion into profit because of the passing of the Cottage Foods Bill is pretty amazing.

What would you want your final meal to be? And what would you want to drink along with it? Any music playing in the background?
If money weren’t a issue, I’d buy out the entire box section at the Hollywood Bowl and invite all my friends and family to a massive home made picnic, complete with my mom’s Swedish meatballs, epic cheese platters, and LOTS of Oregon Pinot. One of my chef buddies would be tasked with busting out a Caja China or a spit. (What’s a party without a roasted whole animal, right?) The Black Keys would open for the Stones that night, and Bouchon Bakery would cater the desserts. I could definitely leave this world a happy girl after a night like that.