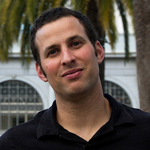 First up was Eater LA’s Kat Odell, but this week, we turn our sights to Josh Lurie of FoodGPS.com.

Hidden talents or superpowers?
Unfortunately, I’m still waiting on superpowers, but I do have a knack for numbers, directions and addresses, which ties into the whole GPS theme.

How long have you lived in L.A.? (If non-native, where’d you live before?)
My first 18 years were in New Jersey, and when I became old enough to have a choice, I left and attended Vanderbilt University in Nashville. I completed internships in L.A. every summer during school, and became so inspired by what I saw, that I graduated a semester early to be in Los Angeles as soon as possible.

What path led you to what you’re doing now?
I grew up in the Jersey suburbs, which weren’t exactly known for culinary diversity, unless you consider pizza and calzones wildly different. Luckily, Manhattan was a short drive, and I would join my family for experiences that weren’t possible in or around my hometown of Berkeley Heights. Meals at restaurants like 456, Peking Duck House, and Smokey’s got me thinking about what was possible with food. At Vanderbilt, I was the restaurant critic for the school paper, the Vanderbilt Hustler. I spent seven years working in TV, honing my writing and research skills, and in 2005, started to apply them to something that actually interested me: food and drink. Initially, my goal with Food GPS was to share culinary experiences that I’d either repeat or recommend, and while that’s still a big part of my approach, lately, I’m just as interested in sharing stories about people behind the flavor. That’s why interviews with culinary tastemakers have become a bigger part of my coverage.

Plenty of writers cover multiple beats, or write in addition to holding down a “day job.” Is this your only squeeze or do you have other work-related things that also occupy your time?
Writing about the food and drink world on Food GPS is my base. I normally write at least a few stories a month for other publications. I also produce culinary events. Last year included the Lamb Showdown, L.A. Beer Float Showdown, L.A. Fried Chicken Fest (co-producer) and Ceviche Nights dinner series (co-producer). 2013 looks to be a big year for Food GPS events.

What about when you’re not eating and/or drinking? What are some of your hobbies or favorite activities?
Since I spend so much time in coffeehouses, sitting behind a computer screen, it’s great to get outdoors, whether it’s running along the beach in Santa Monica or hiking in the mountains. My bike’s done a better job of collecting dust than shifting gears lately, but with some new tires, I’ll be ready to roll again soon.

Favorite part of your job?
Initially, it was amazing to experience all the new flavors and foods, and I still enjoy that aspect of my job, but lately, I’ve enjoyed opportunities to meet the people who make the food and drink. It can be inspiring to hear what motivates these people to be creative and entrepreneurial, and to learn what makes them all unique.

Least favorite part of your job?
There are definitely times when I’m a slave to content. Not as much as in my restaurant news days, but I do tend to focus on newer establishments. Also, say I’m working on a taco or burger roundup, my stomach’s pretty much got to stay on message. That means favorite restaurants don’t get nearly as many visits as they should.

How are you in the kitchen? Anything you’re particularly good (or bad) at making?
My kitchen skills are limited. So much of my coverage is destination-driven, and I typically eat at two different restaurants (or more) every day, so my pots and pans rarely get much play, though I did recently enter the Melbourne Food & Wine Festival’s Recipe Challenge, which pushed me to get creative in the kitchen. The theme was “Earth,” and my mushroom soup really tasted pretty good. I didn’t win the prize, but I still enjoyed eating the soup for several days straight.

What are some of your favorite places to eat around town?
The Hart + The Hunter really nails their stylish, comforting blend of California and Southern cooking. They’ve also carved out a stylish setting in a former youth hostel.

Cooks County is within walking distance of H and the H, and the restaurant’s two chefs are really great. Daniel Mattern has a great handle on market driven, California cuisine, and clearly knows his way around a wood grill. Roxana Jullapat is one of the best pastry chefs in the city, and she’s relentless. Apparently she’s working on bagels now, and I’m sure they’ll be great in no time.

SQIRL is another terrific seasonal café that’s more basic in a lot of ways, but still ambitious. Jessica Koslow and her sous chef Ria Wilson are creative, but never fussy. Koslow also has good taste in coffee, as evidenced by her choice of tenant. G&B Coffee, which manages the bar across from her open kitchen, could be the most exacting coffee bar in L.A.

There isn’t one restaurant in particular, but Koreatown is my favorite eating neighborhood due to all the variety and specialization. It also helps that Koreatown is in close proximity to where I live.

I drink coffee black most of the time, so it better be pretty damn good, since the beans don’t have milk or sugar to hide behind. The three shops I visit the most are Intelligentsia Silver Lake, Cognoscenti Coffee in Culver City, and Paper or Plastik, which has good coffee to go with a really creative (and well lit) space.

With beer, it’s always great to drink at the source, and we can do that now in L.A. at places like Eagle Rock Brewery, Ladyface Alehouse, Beachwood BBQ & Brewing, El Segundo Brewing Co., Golden Road Brewing and more. We also have some terrific bars that support craft beer, most of which appear every Thursday on the L.A. Beer Blast (shameless plug).

With cocktails, so much of the experience for me is who’s making the drink, and the banter, beyond what’s just in the glass. I tend to prefer spirit-forward cocktails, and there are certain bartenders that I trust more than others to make them, but really, at bars with deep, well-trained rosters, it’s less of a crapshoot.

I’ll drink and enjoy wine, but it’s not a priority for me.

Any favorite markets?
When I do shop for groceries, it’s all about Super King, which has some Armenian and Mexican ingredients that aren’t available in shops named for people like Ralph and Von. I really enjoy bulgur, and Super King has a bunch of different grades, along with low-priced spices and a pretty respectable cheese selection.

What do you feel is the most exciting thing happening in the local food scene right now?
It seems like seasonal, market-driven, local, and hand-made aren’t designators that stand out as much anymore. That’s a good baseline when you’re in Southern California and are willing to designate resources to a cause. Now chefs are taking that base and layering on unique themes that are distinguishing their restaurants and making L.A. more interesting.

Fast casual is also on the rise. Some of my favorite places to order at the counter are Komodo for pan-Asian, Seoul Sausage Co. for new school Korean food and sausages, and Clementine Beverly Hills for what might be the best Cobb salad and BLT in town.

It’s also interesting to see small, chef-driven restaurants popping up. David LeFevre is opening Fishing With Dynamite in Manhattan Beach. Ludo, Jon Shook and Vinny Dotolo are teaming on Trois Mec in Hollywood. Craig Thornton is also supposed to be opening a chef’s counter in Little Tokyo. These should be three of the top L.A. openings in 2013.

What would you want your final meal to be? And what would you want to drink along with it? Any music playing in the background?
My final meal would involve bottomless platters of Texas barbecue: brisket, ribs and sausage, aka the Holy Trinity. James McMurtry, John Prine, and Neko Case would be playing in the background, and I’d have several growlers of Southern California IPAs within my reach.