Home Film Why Jon Favreau’s “Chef” Could Only Happen in L.A. 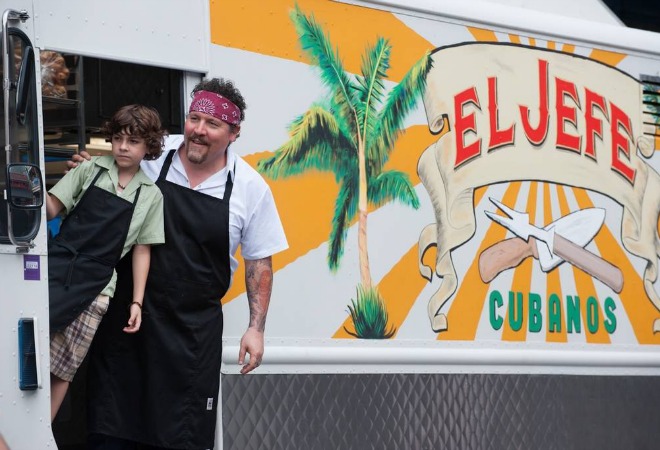 In fact, a wide section of the movie exists as a sort of foodie field trip. After restoring a dilapidated taco truck gifted to him by his ex-wife’s ex-husband (played by Robert Downey Jr.), Casper and his son embark on a cross-country culinary road-trip, serving their new-wave style of Cuban food to eager crowds while making time to inhale the local flavor of each city they roll through: medianochs at Versailles in Miami; beignets at Café du Monde in New Orleans; slabs of brisket at Franklin’s Barbecue in Austin. You feel (and taste) the influence of travel shows like No Reservations in the film’s immersive, enthralling cinematography.

Don’t get it twisted though: Chef is a story that could only be set in Los Angeles.

Much like Favreau’s 1996 indie hit Swingers, it deals with the idea of righteous self-expression in a city that seems beset with fake smiles, sell-outs, and harsh realities. It’s no wonder that in recent interviews Favreau has drawn parallels between the work of a filmmaker and that of a chef. As Casper’s food truck allows him to circumvent the creative restrictions of a traditional restaurant, the relatively low-budget Chef allowed Favreau to pull off a similar feat in risk-averse Hollywood.

So while Casper toils away in a fictional Brentwood restaurant, forced by his boss to serve patently un-hip dishes like caviar-topped eggs and molten chocolate lava cakes, he spends his off-time knocking back drinks at Abbot Kinney bar The Brig and whipping up dishes of carne asada and gochujang-marinated pork inside his run-down Venice apartment (which contains a very nice kitchen, naturally). The cultural contrast is stark, especially for in-the-know Angeleno’s watching the film.

Chef, it seems, speaks to a broader L.A. story that stretches beyond the kitchen. That oft-romanticized narrative is defined by people ditching traditional jobs in favor of pursuing something more fulfilling, if grittier and less glamorous.

Roy Choi can attest to that life. Although he is credited as a co-producer on the film (he served as a major technical advisor, too), Favreau assured viewers that the movie isn’t specifically based on Choi’s personal journey, or the social media-aided rise of his famed Kogi truck. Still, it’s not hard to see the timely similarities.

In fact, one of the most moving parts of the film takes place after the credits roll: a brief behind-the-scenes moment where Choi directs Favreau on the art of making a proper grilled cheese sandwich. Poised over the sizzling grill, Choi offers instructions that are part surgeon and part zen master. Favreau looks on, captivated. It’s an unscripted bonding moment between two men, both enveloped in their own individual passions, in city that allowed them to forge their own paths.