Home Awards Watch Where to Toast the Oscars 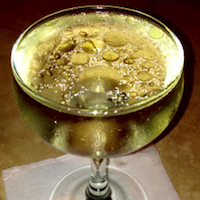 To celebrate the Oscars coming up on Sunday, watering holes all around town are presenting their award-themed libations for your Oscar drinking games pleasure, or to just toast to your favorite Best Picture nominee.

-Bartender Beau du Bois of Corner Door in Culver City will be offering up his ode to Her, Spike Jonze’s love story, from Friday to Oscar Sunday. Called Him it’s made with Old Raj gin, Byrrh, Chareau aloe liqueur and PX Sherry. “I chose gin for this cocktail because of its dynamic and distinct flavor,” said Beau. “Gin always reminds me of heartbreak that usually accompanies a story about being in love. Gin hints at flavors of fruit and botanicals but denies you any sweetness. The gin is stirred with Byrrh, a fortified red wine that adds some plush fruit flavor, and PX Sherry for a touch of savory sweetness. Lastly, I added some aloe liqueur, which brightens and balances the cocktail.“

-In the new Loews Hollywood Hotel lobby bar, H2, which is currently in soft-opening mode, they combined American Hustle and The Wolf of Wall Street in their The Wall Street Hustle cocktail, a mix of pisco, St. Germain, lychee and orange juice.

-Parq Bar at the Montage Hotel Beverly Hills has a thoughtful selection of Best Picture cocktails which will be available through March 31. Try their Letter to Saratoga Springs, a 12 Years a Slave cocktail, a Manhattan variation with a Canadian foundation–Canadian Whiskey, Fernet Branca, simple syrup, and aromatic bitters. Or order the Buying Time Dallas Buyers Club cocktail named after the first article written in 1992 telling the story of Ron Woodruff. It features Reposado Tequila, Regan’s Orange Bitters, St. Germain Elderflower, and lemon oil.

-Skybar at the Mondrian’s cocktail menu was inspired by the performances of the nominated actors. Jasmine’s Royal Blue for Cate Blanchett is gin, lime juice, Green Chartreuse, and maraschino liqueur. Or cut to the chase with the Matthew McConaughey-ian Southern Sex Appeal of whiskey and Coke. But I’m putting my money on Leo’s Classic Manhattan with whiskey, Sweet Vermouth, bitters, and maraschino cherry garnish.

-Bars around town celebrate the statue, the celebrity, and the pomp and circumstance.

-The Beverly Hilton’s The 1929: Beefeater gin, lime juice, simple, St. Germain, prosecco. The hotel is serving its Prohibition-style cocktail in honor of the very first year the Academy Awards were held. Guests can enjoy the cocktail in the Lobby Lounge and poolside at Circa 55 Lounge.

-The BLVD at the Beverly Wilshire has a cocktail for every aspect of the Oscar night, like The Red Carpet with Chambord, Moet Ice Imperial, and raspberries and The Afterparty with Hennessy VSOP, maraschino, triple sec, lemon, and bitters.

-The Hollywood Roosevelt’s Spare Room created The Golden Crusader, named after the sword that Oscar is holding. Made with dry vermouth, Lillet Rose, and Cognac Park VSOP it has a beautiful golden hue. “It’s mostly inspired by the jewelry choices in American Hustle,” said the bar’s beverage director Naomi Schimek. The cocktail will be available all weekend.

-At Wolfgang Puck at Hotel Bel-Air they’ll be livestreaming the show at The Bar where they will also be serving cocktail specials, which are also currently available. Take your pick of the Paint the Town Red with Ketel One Citroen, Cointreau, lemon juice, simple syrup and raspberry puree or the Platinum Toast with Henriot Brut Souverain, Grand Marnier, Angostura bitters, and sugar cube.

-Jose Andres’ annual golden Oscars special, the Golden Trio, is available at The Bazaar at the SLS through Sunday for $25 a person. Indulge in a gold dusted Philly Cheesesteak while sipping on the Spanish Golden Ale cocktail with sherry, gin, chocolate bitters, gold dust (of course), tonic, and lemon air. For dessert there are Golden Chocolate Bonbons from The Patisserie.